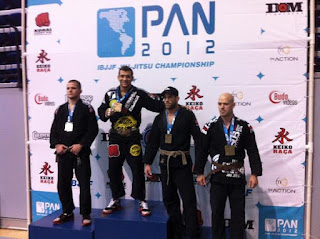 Original article by Junior Samurai in GracieMag
He got the tapout in all nine of the matches he was in at the 2012 Pan Jiu-Jitsu Championship in Irvine, California, snapping up gold in the middleweight and absolute weight classes of the brown belt division. The 23-year-old Renato Cardoso of team CheckMat was the big revelation of the tournament, demonstrating not just a sharp game but versatility, to boot.
“It was one of the most significant championships I’ve been in in my life. I had five matches at middleweight and another four in the absolute. I won them all by tapout, with the absolute final being the quickest—I got a figure-four footlock, one of my specialties, in 30 seconds,” he told GRACIEMAG.com. Renato overcame Adam Piccolotti of Raul Castillo team in the weight-class final and Aaron Michael Johnson of Alliance in the gold-medal match of the absolute.
“I finished three matches with triangles, five with straight footlocks and the final with a figure-four footlock,” he said.

Born in São Paulo City, raised in Caruaru, Pernambuco State, Renato now resides in the city of Santos. “I’m the kind of athlete who always goes for the finish; point scoring is a consequence. That’s something my teacher Rodrigo Cavaca always emphasizes,” he said, sharing a helpful hint for GRACIEMAG.com readers: “I think I get a lot of submissions because of all the drills, the position clinics, I do before beginning a training session. It’s how I warmup and it makes it so the positions come to me automatically.”

Even having running roughshod through the competition, the CheckMat rep admits that he learned plenty at the IBJJF tournament. “The main thing I learned is that anything can happen, you just have to believe, since I went through a number of hardships in making weight: my immunities dropped, I caught a fever, sore throat… Due all that I thought about pulling out after the first match in the absolute, because I was cramping up something awful, but Cavaca didn’t let me get discouraged or give up. When I made it to the final, Cavaca looked at me and said, ‘This is the fight of your life; you always wanted this, and if you win, the team will go from fourth place to runner-up in the overall standing!’ Thank God that’s what ended up happening,” he said, before addressing the next target in his sights.

“I want a repeat performance at the Brazilian Nationals and the Worlds. I’m going to try and win at weight and open weight at both of them,” said Renato, before putting in a word of thanks for his teammates.
“First, I want to dedicate this title to God; without Him none of this would have happened. And to my dad, mom and daughter, who are far away from me. And to my teacher Rodrigo Cavaca and all my training partners and my sponsor Koral,” he said in closing.

Get a look at Renato Cardoso in actionand watch out for his footlock guard and footlock finish!