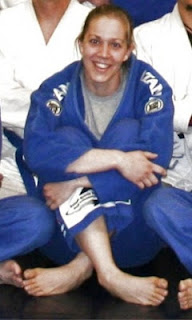 Congrats to Christy Thomas on receiving her black belt from Relson!
Here is what she had to say about the promotion and how she has used Jiu-Jitsu in self defense situations:

“Christy Thomas has been a competitor at the International Brazilian Jiu-Jitsu Federation’s events for years now and a staple of the Texan BJJ scene forever! She recently was awarded her black belt by Relson Gracie. Here’s what she had to say about the moment many consider the culmination of one’s martial arts career.

The FightWorks Podcast: You’ve been training a long time. How long ago did you start and what made you want to train BJJ? 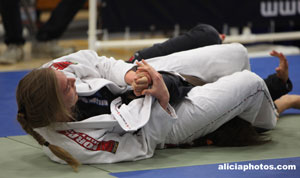 Christy Thomas: It’s been a while. I started in late 2001 so, coming up on 11 years. I was introduced to Jiu-Jitsu and MMA by an old boyfriend. I was always around the Texas scene then started training after I met Relson at a small seminar. I found competition and that became my focus.

The FightWorks Podcast: Have you ever had to use jiu-jitsu in a self-defense situation?

Christy Thomas: All the time. It makes me more aware so I’ve found myself in a few too many tangles, helping others, not to mention the random weirdos that seem to find me. Typically, guys decide to touch me where they should not. In one situation, I used one person (of many) to shield me from the rest so that I could stand up. That worked very well and I disengaged and left immediately. I was just discussing that story with Relson when he was here. He is very strict about the self-defense curriculum and shows his concern about things like that. I want to make sure and help my students learn from my/other’s experiences and understand the complexity of scenarios like a street fight or similar situation.”