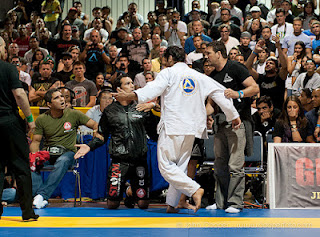 “The Jiu-Jitsu star Bráulio Estima just can’t take training and not fighting anymore. On his ill-fated would-be MMA debut, in 2010, the event Shine Fight declared bankruptcy on the day of the fight and cancelled the entire show.

At the Jiu-Jitsu Expo circumstances were otherwise, but still his opponent, the UFC star Nick Diaz, didn’t show up on the mat for their No-Gi supermatch in Long Beach.

Bráulio had a chat with GRACIEMAG.com and commented on the let-down, as well as the ill-tempered contest between Kron Gracie and his brother Victor Estima.

“I don’t know what went through his mind to not show up. Nick does things like that; he’s really inconsistent. At first I had my doubts that he’d fight me at all, but after seeing the interviews where he said he’d donate the purse to charity and all, I felt more sure about it; I even thought it was awesome,” recalled Carcará.

“When I felt sure he wasn’t going to pull out, this is what happened. I’m really bummed about the situation. His team tried blaming the weigh-ins, saying I didn’t make weight, but that has nothing to do with it. I’m making a documentary, so I have everything that happened on tape. There won’t be any his word against mine,” said Estima, who’s already dreaming of a future encounter.

“I’d love to fight him, with or without the gi or in MMA. He can pick whatever style he wants, and may he show up this time. But I know it’s not likely he’ll accept, unfortunately,” he challenged.

Estima didn’t skirt addressing the heated conversation he had with Kron Gracie after his win over Victor Estima.

THE DANCE OF DISCORD
“It all started when Victor beat Kron at the last Pan. It was a really important match for my brother at the championship, and just after winning he dedicated that hard-fought and well-deserved match to his son, Vincent—the kid’s beautiful. But it was well within his rights and the bounds of respect to do so. I remember how in Abu Dhabi I celebrated after beating Marcelo Garcia in the semifinals, since that match was just as important as a final. I don’t feel it’s disrespectful, if you’re sincere in your celebration,” explained Bráulio.

“So, I’m not sure how Kron saw it, but after the match on Saturday he did the same gesture to Victor—but sarcastically, as though it were comeuppance, revenge. Repeating the gesture one athlete makes is belittling the opponent. Victor would never repeat a gesture that Kron makes; that’s not cool at all. But I think the blood rose to his head; afterwards they had a talk about it, and everything’s cool now. I like Kron, he’s good people,” said the Gracie Barra Jiu-Jitsu Professor in closing.

Check out the photos John Lamonica took at the event, especially the events from the supermatch between Victor and Kron.”