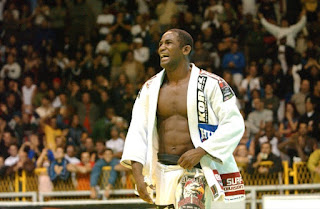 Article by Marcelo Dunlop at Gracie Mag
Unfortunately, it isn’t an April Fools gag, and it wouldn’t be funny even if it was. The owner of one of the most striking smiles in all of Jiu-Jitsu, the star from Cantagalo favela Fernando Tererê had a relapse and is right back in a drug addiction-induced depression, a battle that looked to be won last year. The black belt was all set to lead a serene existence with his wife in England, but he couldn’t keep it together and returned to Rio.
“Tererê is aggressive and back on drugs in the favela in Rio. His family is desperate again and asking for help, and he doesn’t want any help,” reports friend Elan Santiago, a Jiu-Jitsu black belt from team Alliance. “The doctors have diagnosed him as being schizophrenic and having psychotic episodes. It’s gotten ugly. The Jiu-Jitsu world needs to come together again, like it did before, if we want to save him and help his parents, Lena and Tio Barriga.”
The question now is how. How would you help Tererê in such a predicament, gentle reader?

DRUGS IN THE MIDST OF OCCUPYING POLICE FORCE

“The right thing to do would be to stick him in rehab again, but it would cost 17,000 reais, which is inviable for his family and hard for us to come up with again, after all the prior successful campaigns, including with the support of GRACIEMAG.com,” vented Elan.
Tererê’s ex-partner at TT Jiu-Jitsu school Eduardo Telles found out what his friend was going through and agreed to pay to have him taken to a rehabilitation center in São Paulo.
Tererê’s plight is further intensified by the fact that he lives in one of the communities taken over by a police pacification unit. According to residents of Cantagalo, the drug dens are still going strong in the light of day and located just two streets away from the police base. “Nobody wants the drugs leaving the hill; that’s why the police turn a blind eye here,” remarked one resident.
It’s a delicate moment, friendly Jiu-Jitsu fan. What would the best way to help be?
Let us know what you think. And if you would like to collaborate, please contact Elan Santiago via email: elansantiago@yahoo.com.br.

Left with no other recourse, the family of the black belt who dazzled entire gymnasiums last decade have announced account information for collecting donations to pay for a drug treatment facility. They fear tragedy. “He alternates between drug use and violent behavior at home. Everyone is afraid of a tragedy; but we’ll never give up! He came back from England in poor health, and he gets worse with every day. Tererê is still that kid that the Jiu-Jitsu folks know so well, he’s our champions, and we mustn’t lose him,” said the embattled star’s friend from Alliance academy Elan Santiago.

“According to the family’s calculations, they’ll need 15,000 for a four-month stay, plus the relocation costs that Eduardo Telles has agreed to foot. Everyone is really sad, but we need to fight to get him to rehab—and right away,” Elan insists.
To help by making a donation for Fernardo Tererê’s treatment, the bank details are:
Banco Bradesco
Agency: 002786
Account: 500206-0
In the name of Regina Helena Carvalho da Silva
CPF: 082-638-527-30 .