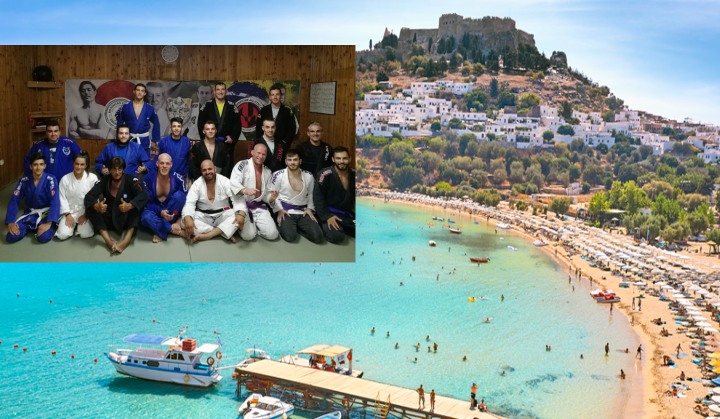 You can read a training report done about Frontline Academy here, and please come check us out if you’re ever in Oslo.

Rhodes is usually associated with Scandinavian teenagers getting drunk and coming home with a sunburn. However, I wanted something a little different from my trip there. From my previous travels I had always had a positive experience bringing my gi with me. Meeting new people and seeing a little different approach to bjj is always good. On this particular trip, however; best decision I ever made….

I had messaged the Rhodes Knights Academy beforehand to make sure there weren’t any rules or policies. I was not aware of. I rented a bicycle and hit up Google maps and started on a voyage that probably broke a few traffic laws. Took me about 30 minutes to get to the gym, as it is located a bit south of Rhodes city. The gym itself is a building behind the house of one of the owners, which is a red and white coral belt in traditional jiu jitsu and 4-stripe purple belt in bjj. I was greeted by the door by Antonis Pappas, who runs the bjj academy and was weight lifting before class in his sauna suit in the middle of the Greek summer…. Crazy guy…. I felt very welcome straight off the bat.

The class was going to start at 7 pm, but as Antonis famously said: “The Greeks are always late”, so we waited until 7:15 or so. As the class started a fellow traveler, Joni from Finland, and I was asked to join Antonis in front of the class as he introduced us to the guys. We started off with some warmups which consisted of partnered body weight exercises. A lot of carrying, dragging and pulling using our belts and gis. After we followed up with passing drills while a partner was holdings us back with their belt. It was a fun, yet very frustrating drill as it suddenly got very hard to pass and secure a position. The technique part of the class was going of the kimura from top north-south, which is my favorite position from top. Antonis showed how to change to grips to that you ended up with an Americana variation, a move I’m looking forward to surprise the guys home with. Then it was time for the rolling. I soon realized that lack of sleep and heat don’t do wonders for your cardio. None the less I had some awesome and tough rolls. 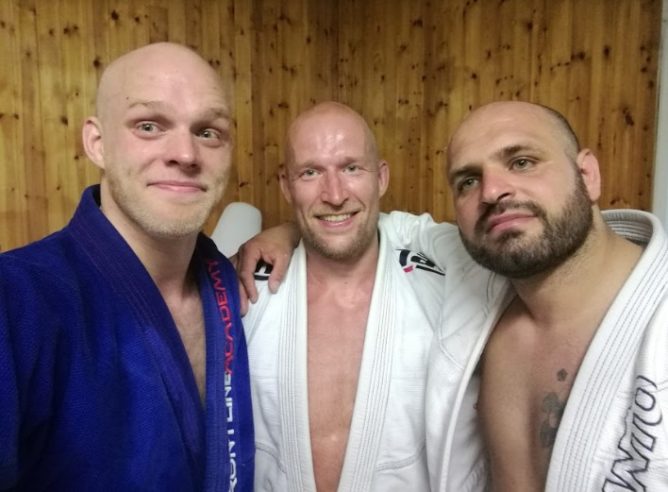 Wednesday was no-gi day. Antonis showed a takedown which could be described best by a fireman’s carry from the back. We also drilled single leg and double leg takedowns, which was fun and much needed since my stand-up game has been “slight neglected” since The Europeans in Lisbon. The class finished off with some nice slow, technical rolling. I was invited out to the club which Antonis worked at. It was a wonderful Greek club located in the absolutely stunning Old Town of Rhodes (an area you absolutely must visit). And the Greeks sure knows how to party. It kicked off about 2 am with live music by a famous Greek singer. It was just magical, even though I did not understand a word he said. Antonis also asked me if I wanted to show the now world famous and lethal Tarikoplata on Friday, which is one of my go-to submissions.

Fast forward to Friday, a lot of the guys are there, and Antonis tells me to just run the entire class like we do it at home. So we do the normal warm up with shrimping, rolling, some partner drills before jumping into the good stuff. I showed how to set up the Tarikoplata from Z guard/halfguard with knee shield and kimura from north-south. Then we went for some hard sparring for a good 40-50 minutes, in which Antonis choked me out a few times and Panagiotis (high skilled purple belt) almost took my foot home with him as a trophy. I felt very proud and honored to be invited to show one of Frontlines greatest exports, the Tarikoplata, and to share the knowledge and passion of Brazilian Jiu Jitsu. 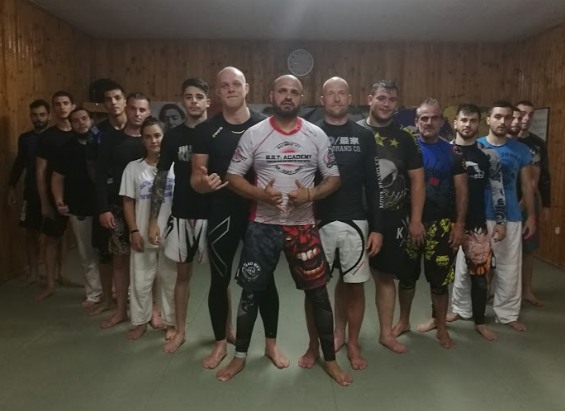 Now, I have not spoken much about the atmosphere in the gym, and this is because I feel that it deserves a section for itself. I mean, these guys were so friendly and welcoming. Showing the great Greek hospitality. I must say I truly feel blessed to have met these guys. Like on Wedensday, after the No-gi class when I went to the club with Antonis; he treated me a freaking Rockstar, introducing me to everyone he knew (which was vertically everyone, no joke). He really emphasizes on having a warm and including atmosphere with everyone, both the guys who train there regularly and visitors. Before leaving on Sunday I was invited to lunch with him, and had some delicious Greek food. Talking some of the other guys who trains there, I heard the stories of how Antonis takes care of them and they really give off the vibe of being a tightknit family. I also went to the bar street on Saturday were one of the guys, Yusuf, owns a couple of the bars and a few of the other guys from the gym work. They too treated me like I was some VIP. They really didn’t have to do that, but I could feel that they went out of their way to make sure I had a great time. I’m having a hard time putting it into words how nice these guys are and how well they treated me. I am left a bit stunned and baffled from the experience, but I can safely say that this has been a truly remarkable trip, and I will absolutely advice everyone to visit these guys and get to know them. They really embody everything that I love about Jiu Jitsu.