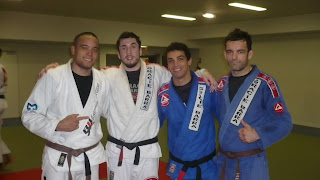 Last friday night, after a long day of shopping in Paris, I went training at Gracie Barra Paris. The academy was created in 2005, and is lead by black belts Rattinho Eliaquim and Julien “Cafetao” Cazier. They have 6 BJJ black belts as well as numerous browns. They have multiple classes everyday located in 6 different locations all in central Paris. 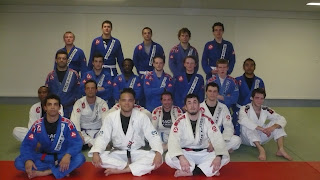 So there I was heading to the friday night class. Unlike in other clubs in Paris I knew Julien, Rattinho and Douglas from competitions but had never trained with them in the past. The gym was located in a new building and had first class Japanese tatami mats which are always great for breaking falls. Class that day was lead by Julien Cazier and Douglas Barcelos (a Brazilian black belt who has been a few years in France). There were about 30 people attending. 2 black belts, 3 browns, 5 purples, lots of blues and whites.

Like in most Gracie Barra academies, everything was very organised: warm ups consisted of push ups, different calisthenics where everybody counted repetitions together. Then we worked some stand up techniques. A foot sweep was demonstrated by a Japanese judo black belt who trains at Levalois Judo Club (which is one of France’s top competition judo teams). Julien then demonstrated back take techniques from the guard when you arm drag your opponent. I paired up with a Polish blue belt and we mixed Polish/Serbian/English as we chatted away while drilling the techniques.

We then proceeded to sparring and I paired up with Vincent a tough brown belt. We exchanged position in a back and forth battle and it was fun roll. Then I sparred with Douglas who weighs between 68 to 70 kilos. He felt much heavier as he distributed his weight very well. I knew that Douglas had a dangerous guard game and that he also liked to attack the feet so I was careful to not expose my long legs too much. It was a pleasure sparring with such a technical BJJ player. I  then sparred with Julien, who has been a multiple time medallist at the Worlds. 3 years ago he came third in the Worlds at brown belt (first was Ian Mcpherson and  second was Rhalan Gracie). Julien worked alot of half guard on me and liked to roll to attack foot locks. He has a very solid and technical game and seems to not use much strength.

That was the end of training. I was spent after the hard rolls. We then posed for the pictures. I have to say out of all the schools I’ve visited so far, Gracie Barra schools are always very organised and structured which I think is a very good thing as a lot of regular BJJ schools can seem very chaotic, and messy at times. The fact that all of them were a uniform, count at the same time etc.. really gives the impression of an army but in a positive way. If you ever you are in the center of Paris make sure to pass by Gracie Barra 75!