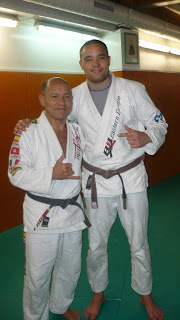 Starting off from where I finished my last article:  http://www.bjjeasteurope.com/2012/05/paris-france-training-report-jeremy.html , I had just finished my first training session for the day at Jeremy Idels BJJ, and was now doing the short 10 minute walk to PS Phoenix in the same Bastille area of Paris. The Wednesday night session starts at 9pm. PS Phoenix was founded by Master Paulo Sergio Santos, a 4th degree BJJ Black Belt under Master Jacare Cavalcante, and also a 2nd degree judo black belt.

I have a sentimental attachment to Paulo Sergio as he was one of my first BJJ instructors. He arrived in Paris in 2003 and I trained under him for 1 year until I left France in 2004. Paulo Sergio came from Alliance Jiu-Jitsu in Florianopolis Brazil. He was one of the founders of Alliance BJJ France, before breaking off and opening his own network of BJJ academies PS Phoenix with schools in Brazil, France, Spain, Italy, Tunisia, Bolivia and Australia. Paulo Sergio is also a international IBJJF Referee, recognized and respected all around the world. I remember that back in 2003, I brought my then girlfriend (now my wife) to watch me training at Paulo Sergio’s. Big mistake lol. Paulo submitted me like 9 times and my girlfriend couldn’t believe that such a small man in his late fourties could dominate me and kick my butt like that. That’s because Paulo Sergio is a true Jiu-Jitsu artist and his game is clean and pure making no mistakes. 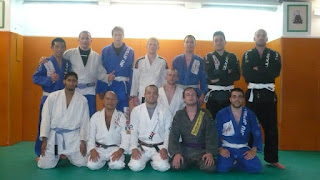 So there I was training with Paulo sergio and his students. We started with a regular warm up of push ups and sit ups and leg presses. Then came the hard part: “Pula pula” which is a type of cardio work where you have to jump over your partner then follow it up right away by going through his legs, then do it again for 1 minute. Some guys there were obviously well versed in the pula pula and did up to 28 reps in 1 minute! Needless to say it is a great cardio exercise for BJJ.
There weren’t so many advanced guys that day, just two purple belts, a few blues and white belts. The blacks and browns that Paulo Sergio graduated didn’t make it to training that day. It was too bad because some of them were my old training partners (Alexis de Bretagne, Ali Tractor, Fabrice Marvaux, Mathias, Samir)
So we were drilling some techniques, I partnered up with a white belt. At one point my partner was doing a technique wrong and Paulo Sergio jumped in to correct him and I noticed that he called him a Brazilian sounding nickname (i forgot which one now). I asked my partner what that nickname meant and he told me that it was the name of a Brazilian football team that always loses!!! That made me laugh. Brazilians always give each other funny and sometimes unflaterring nicknames.
So we started rolling and Paulo Sergio partnered me up with his purple belt Rida. He was in his mid thirties around my weight and very muscular. The roll was pretty intense and I was to pass his guard and mount him a few times. The rounds were ten minutes which is great for conditioning. Next roll was with a purple belt called Renaud. He is a frequent competitor in the European circuit and has a very technical and “new school” game consisting of rolling attacks, berimbolos, etc.. I was outhweighing him by a good 8-9 kilos so was able to block many of his constant attacks. At one point as I was on top in cross control, he trapped my head and arm in a reverse triangle ala Braulio Estima but I was able to pull out. Rolling with him was fun.The last roll was against a lightweight blue belt who I think drank 10 red bulls before our roll as he was all over the place and got caught with like 2 elbows and heels to the face a couple of times lol! Nice guy though and very promising.
I noticed that all of the guys there were very well conditioned and all had solid basics which very important as nowadays some new guys would rather learn to do a flying omoplata before learning a mount escape. I really recommend training at Paulo Sergio’s if you are ever in Paris. it’s the closest you will get to learning straight from the source. From a real Brazilian Master!