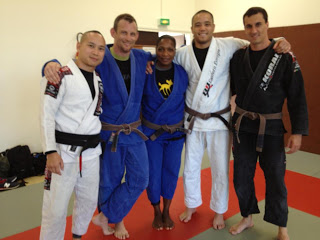 NCU stands for Nanterre Club Universitaire. It is a BJJ/ Luta Livre/MMA/Boxing club located within Nanterre University in the Paris suburbs. Like in many clubs in Paris, I have trained for a long time with a lot of guys there and it was a pleasure to train there again after many years.

The training started at 7:30 pm  and there were about 45 guys on the mat that day. The level was very impressive with 5 black belts, 8-9 brown belts and lots of purples and blues. Some of the blues were famous French MMA fighters and some of the purples were top level French Judokas.
The class was lead by David Pierre Louis who is one the most accomplished BJJ black belts (from Ricardo De La Riva) in Europe having won numerous titles in BJJ and grappling worldwide. 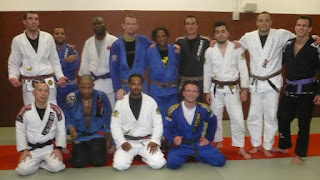 The warm up was done at a frantic pace where everybody had to run back to the starting line when doing rolls.The whole time as the class was progressing there was RnB music playing and it was a nice change from some other class atmospheres where silence is the measure. David showed us a some nice ways of taking the back from the De la Riva  guard. Some of the details he showed us made a big difference.

We then did some positional sparring. My first partner was Stephane, a guy who had started Jiu-Jitsu at the same time as me and in the same club in Paris. Stephane is a tough 45 years old brown belt with real grinding style. He makes up for his lack of speed with relentless pressure and heavy top game. Old man Jiu-Jitsu at it’s finest! My second  roll was with Thomas, a brown belt who had also started around the same time as me. This was Thomas’s first training back after a two month break because of the birth of his second son. His game is very solid and I could see that with a full gas tank he would be a handful for anybody. I then rolled with Suzy, a female brown belt. Suzy is one of the best competitors in Europe and possesses a solid Judo base and great jiu-jitsu. It was a pleasure sparring with her and she has a very technical style.

We then proceeded to do proper rolls and I rolled with three more guys. 2 brown belts and 1 black belt.
The level of instruction and players at NCU is amongst the very best in Paris and probably in France too. The guys are very welcoming and there are multiple classes every day of the week. Highly recommended for sure!