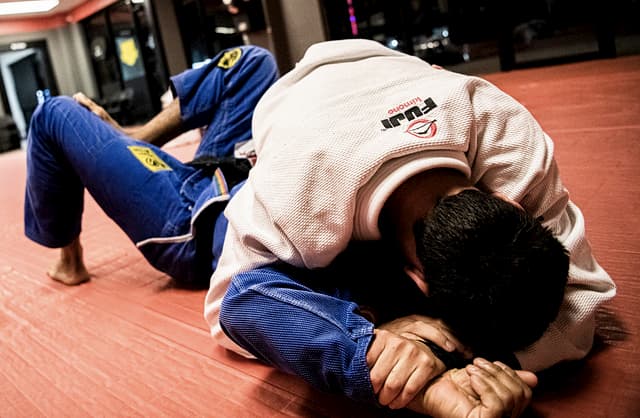 Been working much on your techniques lately? And so you should, great job! After all, technique is king in Brazilian Jiu Jitsu, it’s what your training time on the mats mostly consists of; so it’s only natural to invest most of your effort into fine-tuning it.
But, let us take a wild guess and claim the following: you may have developed solid technique, but you are a much worse athlete than you think you are!

Be honest with us… Have you been in the gym lately? Or, if not the gym, have you at least been doing some calisthenics? „No.“ Well, why?
It’s truly a strange thing to see that most Jiu Jitsu athletes (at least at the amateur level) don’t incorporate regular strength training. A great deal of reason behind this could be found in the fact that, all the way since a Jiujiteiro gets in his or hers first couple of rolls in, they are constantly bombarded with the notion that they „shouldn’t use strength“.

The reasoning behind this is understandable; instructors want you to start using your brain. They want you to stop spazzing out and to implement what they’ve been teaching in class. However, after a certain time passes, a lot of BJJ practitioners start focusing solely on technique.
This is plain wrong. A lot of your success in Jiu Jitsu will come from your ability to use strength as much as it has to do with your technique efficiency. Because, just for the sake of a mind experiment… If you were paired up with someone who has absolutely the same level of skill as you do, but is stronger – do you really think that you’d win?

BJJ ATHLETES EVEN AT THE PRO LEVEL LARGELY TRAIN LIKE AMATEURS

Ben Askren was a guest on the Joe Rogan Podcast where he criticised the training methods of BJJ schools and what he sees as a lack of drilling.

LACK OF STRENGTH TRAINING IS HINDERING YOU AS A BJJ ATHLETE

The answer is pretty obvious: most likely, you’d be the one on the losing side. Just focusing on technique and nothing else will leave you short-handed. Without strength training, a lot of Jiujiteiros are losing on their potential as athletes; which means they won’t reach the greatness they could have amounted to.
So what’s the cure? It couldn’t be more simple: begin strength training.

It doesn’t have to be anything crazy nor time-consuming… And it really shouldn’t be, as Jiu Jitsu training should still take precedence over the time you spend hitting the weights or/and the pullup and dip bars.
Begin with compound movements – the deadlift, squat, barbell curl, bench and overhead press; as well as the pullups, dips and lunges. These are the most effective bang for your buck exercises, through which you’ll not only increase your overall strength, but pack on some decent size as well. Go for a maximum of 5 reps per exercise (although you can vary the amount of sets) and increase the weight as you get stronger.

BUT SO DOES THE LACK OF ENDURANCE AND MOBILITY WORK

However, it’s not enough to just work on your strength to reach the pinnacle of success as a BJJ athlete. You need to work on your endurance and mobility as well!

Sure, you’re building great endurance by rolling; but if you want to take it up a notch, add some grueling interval sessions in the gym too! Get to the battle ropes, do some sprints, or do a 20-squat routine (warning: you’ll be gasping for air after this one).
And similarly, don’t cut yourself short by working on mobility only every once in a while. Do it after every training session and in the gym as well – you’ll get injured far less frequently and your Jiu Jitsu will feel much easier.