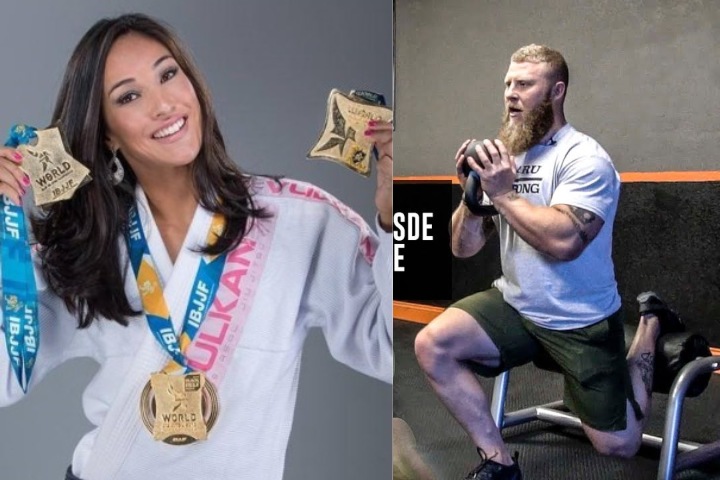 Have you ever wondered how an „average“ workout of a top MMA and BJJ competitor looks like? Well, Phil Daru, one of the world’s most renowned strength and conditioning coaches – a head coach for the American Top Team – has spent more than 10 years coaching elite-level athletes, getting their physical preparedness on a whole new level. And in this case, he leads Gezary Matuda through a BJJ-specific strength and conditioning workout.

Phil gets Gezary and other athletes to first warm up with an easy five minute run. After that, Phil explains, they will get into dynamic stretches, some activation techniques and a little bit of mobility work as well; after which they will hit the weights.
So, after the warm-up has finished, Phil gets everyone in two lines for a Lunge variation. Essentially, he asks the athletes to lift their knee to their chests, hold it there with their arms for a second, and then lower the leg into a lunge; reaching their arms up above their heads in the process. Then, they do the same thing on the other side.

After that has been done, Phil instructs them to do a bodyweight Squat variation. Essentially, they need to squat down with their knees pointing out and with their elbows pushing those knees out even further; as well as with a tall chest posture. Then, they squat back up and pivot on one of the legs so that they switch sides and do the same thing on the other side. Once done with this, they perform the Lateral Band Walk and Toe Lifts.
The following exercise is the Single Leg Bridge; the top of the movement is held for a 2-second count before the leg is lowered down. After that, a Single Leg Bridge variation is performed, where the elevated leg is twisted to the side and then back in. Phil emphasizes that it’s necessary to have the core engaged throughout the movement. When the athletes are done with that, they perform the Fire Hydrants; the point here is not to move anything other than the leg – from the hip!

From there, Phil gets his athletes into a sort of a Wall Squat variation. However, the focus isn’t only on the legs here; but on body alignment as well! He gets them to keep their lower back pressed against the wall at all times, as well as the back of their necks. Then, they need to straighten their arms out and reach up as much as they can without losing those points of contact with the wall.

In the weight room, the first exercise that Phil gets Gezary and other athletes to do is the Deadlift. He points out to Gezary that she needs to start out by standing tall and squeezing her glutes. Then, she needs to hinge in her hips, grab the barbell and tighten up the lats. Now, she has to drive through her heels and come straight up – without overextending her back.
Immediately after, she does a Floor Press variation with hips off the floor. Pay notice how to Phil emphasizes that she needs to lower the bar to her sternum.

Then, Gezary does the One Arm Dumbbell Row. In the meantime, other athletes are doing Bridges and Briefcase Carries with an elastic band. The workout, in the end, is finished with Knee Ups; which are aided with a sled wrapped around the athletes’ waists and a weighted vest over their chest.

Watch the entire workout on the video below: