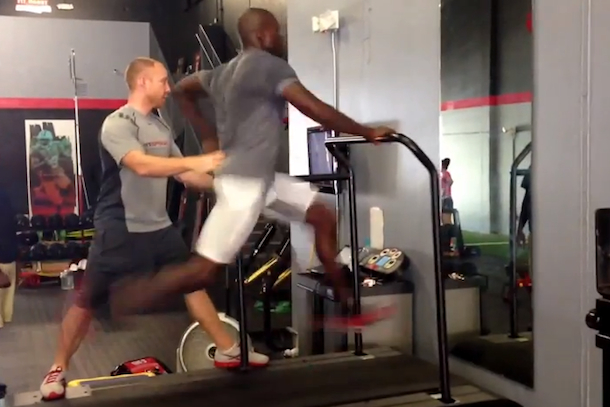 You can’t make it everyday to BJJ for scheduling reasons? With winter coming, try this cardio workout on treadmill: Interval Treadmill Sprints on the treadmill with Funk Roberts.

Check out our article:

Benefits of sprint interval training from this article in Huffingtonpost.com:

“Sprint intervals condition the aerobic system in less time. Sprint intervals from six to 60 seconds provide similar cardiorespiratory benefits to endurance or lower intensity intervals but in a fraction of the time. Dr. Izumi Tabata, famous for inspiring the Tabata training method, demonstrated that just under three minutes of time spent in sprint intervals delivered similar aerobic benefits to 60 minutes spent in moderate-intensity endurance training. That amounts to similar benefits in less than one-twentieth the time. Studies have demonstrated that the higher someone’s anaerobic power is, developed through sprint training, the better their endurance.

Sprint intervals condition the anaerobic systems. This means that you can handle really tough work for longer, such as running with your bag to catch your flight or carrying your 3 year old when she’s too tired to walk. Anaerobic fitness actually comes in handy more often than you’d think.

Sprints make you stronger and leaner. It’s not hard to see why sprints cultivate more strength than lower intensity training. Sprints require speed and power, and these develop strength. Your muscles give everything they can — and quickly. Maximal sprints have a muscle-building effect and encourage lean bodies. In other words, they burn fat. This enhanced body composition results from several factors.

A second factor is increased fat utilization. With very high-intensity training, you deplete your muscle glycogen stores quickly. An enzyme in your muscles called AMPK revs up, leading to more fatty acid utilization for energy and less glucose use, as your body sends the sugars back to replenish its glycogen stores. Other enzymes that favor fat burning over glucose also increase, making your muscles glucose-storing and fat-burning engines. Also, the high levels of lactic acid that build up are associated with higher levels of testosterone and human growth hormone, which stimulate fat breakdown as well.

A final factor, and likely a large one for some individuals, is the appetite-suppressing nature of very high-intensity workouts. Studies have documented decreased appetite following exercise, with the greatest decrease occurring after the highest-intensity workouts.

Sprints boost your mood. Exercise that demands heavy reliance on the anaerobic systems has been shown to increase circulating mood-enhancing beta-endorphin levels more than moderate-intensity endurance exercise or intervals of less than near maximal intensity. In general, it appears that the higher the intensity and the higher the levels of lactic acid, the greater the release of feel-good beta-endorphins.

Sprints improve brain function. Exercise is well-established as one of the key players in enhancing cognitive performance. It appears that higher intensities provide more dramatic results. A study that contrasted moderate-intensity running with high-intensity sprints concluded that the high-intensity sprints were associated with significantly better short-term learning success and intermediate-term and long-term retention of learned material.

Making Sprint Interval Training Part of Your Workout Routine
Here are a few guidelines to get you started:

Use hills or resistance to increase the intensity. This means different things for different activities. If your sprint activity is walking/running, the best way to reach the intensity you need without sprinting at max speed on a level surface is to run up hills or place your treadmill on full incline and go as fast as you can for 30 seconds to one minute. This will spare your joints and tissues without sparing the intensity. For a bike, it’s the same principle: hills if you’re outside, resistance if you’re on a stationary bike. Swimmers already have the water acting as resistance. Going all-out, as fast as you can for 50 meters is a good swimming sprint to try. For most cardio machines, adding incline or resistance is a safe way to increase intensity without having to increase speed and impact to the point of high risk.

Warm up and cool down. Warm up for at least five minutes before performing a sprint, and then do one or two high — but not maximum — intensity sprints before going all-out and giving maximum effort. After your workout, cool down for another five minutes. Follow the workout with a few minutes of stretching.

Do sprints once or twice a week. One to two times per week of actual all-out effort sprints is enough to reap the benefits. Give yourself at least 48 hours between these workouts. On two or three other days of the week, you can do some moderate intensity steady-state cardio for longer durations or some high-intensity interval training. Do no more than three days in a week of combined HIIT and sprint workouts.”