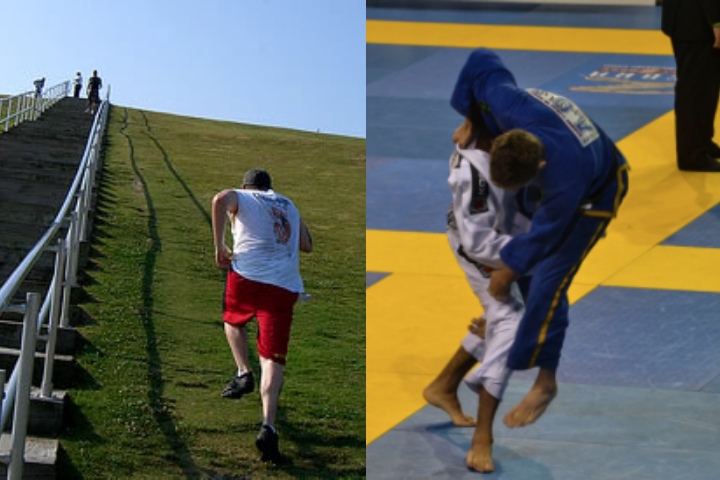 If you want to get better at Jiu Jitsu, then you should focus on training BJJ as much as possible – period! That is to say: if you want to become really good at one thing, what you really need to do is practice more of it. But, it also wouldn’t hurt to add some additional physical activities into your training regime; especially if they’re going to help you in the development of your Jiu Jitsu.
This is especially true when we take cardio into consideration. So, bring on the epic drum roll… Because you’re going to do hill repeats!

HILL REPEATS? WHAT? WHY SHOULD I DO THEM?

Now now, we know what you’re thinking. That’s a rather weird name for an exercise, right? But what lies behind the name couldn’t be more simple. It’s a form of running, where you’re running up and down a hill. You just find a hill nearby, and you start running up and down on it… However, isn’t that sort of silly? Why, in the world, would you be doing that?
While it may seem ridiculous to some, it’s anything but silly. Actually, it may very well be the hardest workout you’ll do in your life! (Apart from Jiu Jitsu, of course.)

The thing is, hill repeats are a true cardio destroyer. They’ll get your heartbeat to the max very quickly. So, whenever you get this workout done, you’ll feel as if your lungs will want to burst out, run away and hide in a nearby forest. They’ll be burning just as much as they do after a pedal-to-the-metal 6 minute rolling session with your favorite training partner.
With that, hill repeats are going to be great for your leg strength. Your calves, quads, hamstrings, and glutes will become stronger; as well as your hip flexors. This will decrease the chance of BJJ-related injuries.

Additionally, „regular“ running can be really boring. You’re constantly running at one pace and, even though you do get tired, it sometimes doesn’t feel as challenging as you’d like it to feel. With hill repeats, however, this isn’t a problem.
Not only are they EXTREMELY challenging, but they are also less time consuming! Basically, if you’re not doing them, you’re missing out on a lot.

HOW SHOULD I GO ABOUT DOING THEM?

As you’ve finally decided to start doing hill repeats, you need to figure out how to go about them.

For starters, you should decide if you want to run for distance, time or intervals. That is, do you want to structure your training session around a set number of miles, around the time you’ll spend running… Or do you want to do intervals, a form of the dreaded HIIT training? Whatever it is, choose and stick to it.
Also, it’s probably wise to have at least some background in running. You don’t have to be an experienced ultramarathon runner, but having ran for a few times per week, on average in the last month or two, would be a great starting point. Not just because of your cardio, but because your tendons and ligaments will be better prepared, too.

And finally, when you’re looking for the hill to do it on, don’t overcomplicate things. It doesn’t have to be a literal hill (if it is, pay extra attention to the terrain, so you don’t trip and fall). Rather, you can find a street with an incline (nothing too crazy, just enough to challenge you) and get going.
That is one of the beauties of hill repeats as well; they are extremely simple to do and don’t require too much pre-planning!