This Sunday the 29th marks the completion of the European Jiu-Jitsu Championship 2012 in Lisbon, Portugal.  Rodolfo Vieira repeated the stellar performance he put in at last year’s Pan and Worlds, winning at weight and open weight. In the overall team contest, Gracie Barra took top spot in the adult category.
In the heavyweight decider, Vieira tapped out Roberto Tussa. The champ’s opponent in the absolute, Bernardo Faria, won his super heavyweight division by taking Lúcio Lagarto’s back. In the open weight final, Vieira and Faria faced each other yet again, as they did at the 2011 Pan and Worlds. And yet again, the one who came out on top was the GFTeam prodigy, as Rodolfo passed guard and mounted in winning gold.
Of the other divisions, Roberto Satoshi was the big standout. The newly promoted black belt overcame the likes of Michael Langhi (6-4) and, in the final, Jonathan Torres (5-0). In the middleweight division, Victor Estima tapped out Alan Finfou by using his family’s specialty: the reverse triangle. At light featherweight, Carlos “Esquisito” Holanda subbed Leandro Martins. 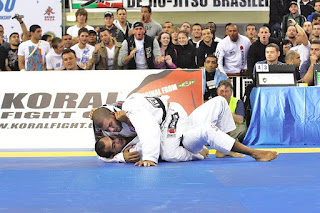 In the other men’s divisions, Bruno Frazatto defeated David Luciano at featherweight; Koji Shibamoto was the grand champion at roosterweight; Rodrigo Fajardo outdid Nivaldo Oliveira at medium heavyweight; and Alexander Trans made his debut as a black belt with flying colors, overcoming Thiago Gaia in the ultraheavyweight final. Last year, Trans won both weight and open weight at all the main championships but as a brown belt.

to check out the final results:  http://www.ibjjf.org/results/2012euro.htm