These Are The Top Foods For Recovery After BJJ Training 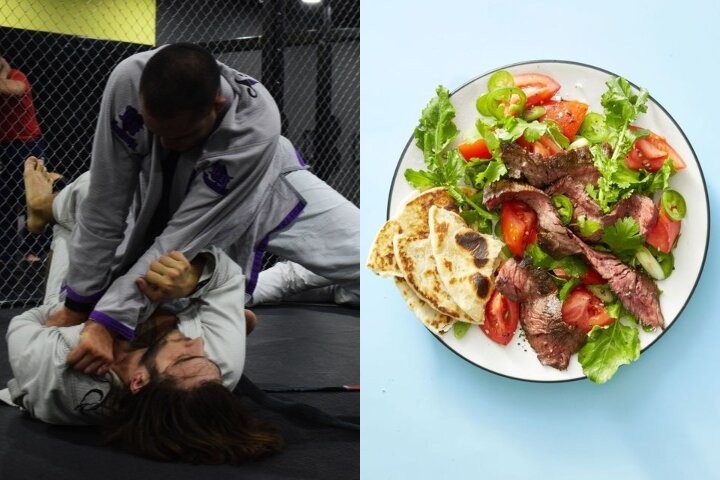 That after-training feel is pure bliss. You feel relaxed, less stressed, and more enthusiastic about what remains of the day ahead… However, your “training job” isn’t done yet. You need to eat something that will help you recover and get ready for the next rolling session.
But which foods should you eat? Before answering this question, let’s take a look at what your body will need after BJJ.

PROTEIN AND CARBS: THE MAGIC FORMULA

As you roll (or doing any other form of exercise, for that matter), one of the things that happen to your body is that it undergoes a process called “muscle tissue breakdown”. So, you want to eat properly after in order to rebuild that muscle tissue; which will lead to it becoming stronger and more endurable.
With this in mind, you’ll want to eat a mix of protein and carbs after training. Both of them, when combined together, have a synergistic effect on insulin; which, in this case, is an anabolic hormone that is going to help restore and replenish up your broken down muscle tissue.

And what about timing? It’s really simple, actually: just eat your protein and carbohydrates mix in the first several hours after training. There is no need to rush things and eat within the first hour, as many supplement companies suggest you do.

As far as protein is considered, you’ll want to eat something with 20-30 grams of high-quality protein source in it. “High-quality protein” is the one that contains all of the essential amino acids. Which is, essentially, animal protein: chicken, fish, beef.. And salmon as well, which is also high in omega-3 fatty acids.
If you’re looking for protein shakes, opt for whey protein. It’s absorbed much better than casein protein.

You can’t just take protein into your system after a workout, because you also need carbohydrates. How much? Just take your bodyweight (in pounds) and divide it by two – that’s how many grams of carbohydrates you need to take in after training.
In so far as the food itself is considered, you can break it down like follows. One cup of rice is around 40g of carbs. Or, if it’s easier for you, feel free to go for supplements in this regard as well.

Watch the video below for more information on how to improve your post-training nutrition: