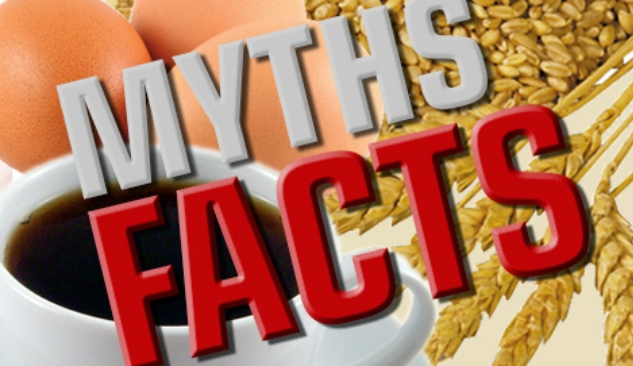 When it comes to nutrition, don’t always be fooled by what you hear from other people or in the media. Despite clear advancements in nutrition science, the old myths don’t seem to be going anywhere. Examine.com made a list of nutrition myths that are perpetuated by the media. Here are some of them:

Myth 1: Bread/Carbs are bad for you

Carbohydrates have gotten a bad rap in the media. Critics have been especially tough on bread, since it also contains gluten. In contrast to the reports claiming that gluten is universally unhealthy, evidence suggests it produces symptoms predominantly in those with intestinal disorders.

The relationship between carbohydrates and insulin is a breeding ground for nutrition myths. Insulin was one of the very first hormones to be discovered, and it was also the first hormone to be investigated in the context of sensitivity. Early evidence led people to believe that an increased carbohydrate intake could cause insulin insensitivity. This is moreso true for diabetic and insulin resistant people (usually obese individuals) overeating carboydrates, but the myth persists.

While gluten gets all the attention, other compounds may be as or more important for people without celiac disease who suspect that they have gluten sensitivity. For example, some of the same researchers who discovered that gluten intolerance exists in people who don’t have celiac disease did a much more thorough follow-up study, and concluded that gluten was not necessarily to blame in those with irritable bowel syndrome. They suggested that compounds falling under the category of FODMAPs (which are present in a variety of plant foods) may be a greater issue.

The Truth: Carbohydrates have been vilified long enough. As long as you don’t overindulge and exclude other food groups, starches are not inherently harmful. While some are sensitive to wheat, the gluten isn’t necessarily to blame, and other foods may be even more implicated.

Myth 2: Eggs (especially egg yolks) are bad for you

If there’s one thing the media is good at, it’s scaring you away from perfectly innocent foods.

Eggs have been demonized because their yolks, which are chock full of nutrients, also contain high levels of cholesterol. Though that sounds scary, eating food high in cholesterol doesn’t translate to increased cholesterol in your blood.

The actual research shows that unless you have a pre-existing condition, eggs are a fantastic source of protein, fats, and nutrients. Their association with cardiovascular disease is a myth.

The Truth: Eggs are a great source of protein, fats, and other nutrients. Their association with cardiovascular disease and high cholesterol is severely overblown.

Absolute statements like this one are the nutrition myth’s best friend. Cancer is particularly difficult to discuss in absolutes. After all, almost everything we eat has the potential to cause cancer.

For example, antioxidants could both promote and hinder cancer growth, but the effect is usually too small to notice.

Some compounds, like polyaromatic hydrocarbons (PAHs), found in smoked meats, have been found to damage the genome, which is the first step to potential cancer. Current evidence suggests that red meat can pose a cancer risk for people with poor diets and lifestyle choices. If you don’t smoke, have a consistent exercise schedule, and eat your vegetables, red meat’s effect on cancer is nothing to worry about.

The Truth: The fears about red meat and cancer are exaggerated. Eliminating other risks of cancer, like smoking, and practicing healthy lifestyle choices will render the risks of red meat negligible.

Myth 4: Saturated fat is bad for you

The traditional way to lose fat for a long time was a low-fat diet. But just like eating cholesterol doesn’t directly increase your cholesterol levels, eating fat doesn’t make you fat.

The myth that saturated fat causes cardiovascular disease is not true. Food quality is what matters – there’s a big difference between eating a steak and a greasy hamburger with fries.

The Truth: Saturated fat itself will not lead to heart disease or cardiovascular disease. In fact, you need a bit of saturated fat to keep testosterone production normal!

Myth 5: Salt causes high blood pressure and should be avoided

Most myths are rooted in a grain of truth. It’s true that people with salt-sensitive hypertension (SSH) should avoid salt because it raises their blood pressure.

A recent study however, suggests there is no association between salt consumption and hypertension, a condition characterized by abnormally high blood pressure.

Instead, evidence suggests high body weight, as measured by BMI, is associated with elevated blood pressure.