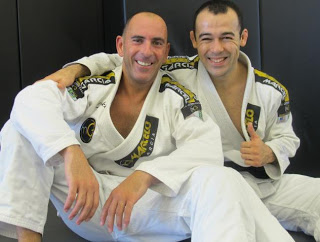 1. Hi Zeljko can you introduce yourself to the BJJ community of Eastern Europe?

My name is Zeljko Drinovac, coming from Zagreb , Croatia. I’m a bjj brown belt and training at Marcelo Garcia academy in NYC.

2. Please guide us through your journey in Jiu-Jitsu from when you started to now. 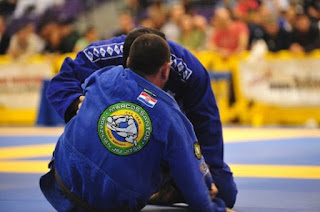 I started training bjj in Zagreb, Croatia at end of year 1999 with a team headed by my long time friend Dubravko Colic ( black belt under Fabio Gurgel). He was the one who got me started in bjj.
At that time it was very hard to get any information ( no seminars, no you tube) and therefore we practiced traditional jiu jitsu as well.
At end of year 2000, I moved to NYC where I started training with prof. Marcos Santos ( 4th degree black belt) who was the official representative for the Machado Brothers on the East Coast.
At that time Marcus owned the second biggest academy in NYC after Renzo Gracie.
From year 2000 and until my return to Croatia at end of year 2005 many of bjj names stopped by at Marcus academy to teach seminars or training and keep high level of jiu jitsu ( Rigan Machado, Grandmaster Francisco Mansur – red belt, JJ Machado, BJ Penn, Rany Yayha, Gabriel Gonzaga etc.)
Upon my return to Croatia at the end of 2005 I opened an academy as the official and sole representative of the Machado Brothers for East and South Europe.The academy was short lived: nine months all together because of my return to NYC.
Since my return to NYC at end of 2006 , I continued to train at the Marcos Santos academy and I also helped to teach students as an instructor until 2009.
In 2009, Marcelo Garcia arived at Marcus’s academy and started preparing for ADCC 2009.
Soon after that, Marcelo ,together with my long time training partner Josh Waitskin ( first black belt under Marcelo Garcia) opened a new academy where I train until this day.

3. How are the trainings at Marcelo Garcia’s academy in New York?

To train with Marcelo Garcia is a special privilege. Marcelo is a constant presence at the academy teaching and training 2-3 time per day.
Training includes a very hard warm up, 15 min. techniques and long sparing with 30 sek. break.
Marcelo tries to spar with almost all students and stays focus 100 % on techniques ( he likes to say ” We are not training to be stronger than someone else but, more technical”
There are minimum of 4 to 5 black belts present at each training included two other instructors at academy Paul and Henrique.
In the events when Marcelo is preaparing for a competition ( worlds or ADCC) sometimes there are up to 13 black belts on the mat (Lukas Lepri,Sergio Moraes , Gabi Garcia, Mark Bocek , Ryan Hall, JT Torres etc.) TROPA DE ELITE!
Every sparring is a class is almost commpetitive and therefore, none of the students need any additional physical preparation before actual competition.
Beside, there are many daily visitors fro all over the world ( Australia , Micronesia, Europe, Korea japan, South America) who stopped by to train at the academy.
Every tehniques and every sparring with Marcelo in the last two years you can see at his website www.mginaction.com

4. What does Marcelo Garcia represent for you?

While training with Marcos Santos I obtained a lot of experience as a competitior and as an instructor.
In addition, Marcelo helped me open a new horizon in jiu jitsu and free my mind to get better everyday in every way of life..
I have never seen someone as modest as Marcelo, who completely shares his knowledge, with absolutely no reserves and without keeping any secret tehniques to himself which would give him an advantage over his opponents. Even after the training session, Marcelo stays with his students further explaining the techniques through pleasant conversation. With his 100% devotion he encourages all to give their full mental and physical potential. On the top of it all, Marcelo respects discipline and the tradition of jiu jitsu what I especilly respect. Promotion of belts at the academy is held twice a year and recipients are those whom Marcelo decides that made certain progress in their techniques and spparing.
In regarts to black belt, the fact that Marcelo promoted only 2 black belts in the 9 last year is the best indicator how traditional he is.

5. You’ve spent some time in Croatia 6-7 years ago starting a BJJ school in Zagreb. How do you view the Croatian and regional BJJ scene nowadays?

I left Croatia for second time in septemper 2005 as a purple belt on that time.
From then until now there were a lot of changes in the BJJ scene in Croatia. The number of people training jiu jitsu is impressive and bigger every day but in all progress in last 7- 8 years we shouldn’t forget those who made this possible with their hard work, dedication and promotion at high level ( Dubravko Colic, Vedran Ikic, Goran Reljic, Ilija Cavarovic, Damir Salina, Matko Kvesic, Zeljko Vukovic) and many others who gave without reserve their contributions to this sport in Croatia.

6. How would you describe your style of Jiu-Jitsu (your game)?


My game changed drastically since I’ve been training with Marcelo in a way that I almost never use closed guard any longer. I try to follow everything he teaches me for bottom and top game, specialy in the sitting position which gives me greater mobility and better chance for attack so that my opponent must defend himself a lot and he has a higher probability to make a mistake ( tip from Marcelo)

7. What is in store for you in 2012 in terms of competitions, bjj travels, training?

In 2012 there are definitely two big competitions in which I must compete. First, there is NY international open in April, and after that there is Pan AM games NO GI in October.
On the top of that, I must train daily ( hopefully, without injuries), spend 5-6 weeks on the summer in Croatia and doing my very best to get as close to next promotion, of course and put my stuff together because I’m coming back to Croatia for good in 2013.


Not hard to guess!! ( Hahaha) Im my opinion, Marcelo is the No 1. bjj player in the world with all due respect to all other big names that have been on the bjj scene in last 10-12 years ( Roger Gracie,Braulio Estima, Jacare, Saulo and Xande Ribeiro, Tererre ect.).
He is still 5x times black belt world champion, 4x Abu Dhabi champion and No 1 ranking grappler on the planet earth.

Ah ,that’s a hard guestion!! Looking objectively, it is my long time friend ( we know each other for more that 35 years) Dubravko Colic ( Fabio Gurgel Black Belt)
We are training together every time I come to Croatia, even during the summer when everyoone takes a break, we workout one on one. I can always count on learning something new from him, even with my NYC experience.
I remember a time in life when we used to go out on Saturday nights until 2 am and then decided to go sparring before going to bed. ( Good times)!!

10. Zeljko, many thanks and we wish you all the best! OSSS!


Thank you for giving me a chance to present myself and the academy where I’m training to the bjj comunity in Eastern Europe.