Worlds 2012 big star, Marcos Buchecha: “I never fight to a draw. Either I lose or I win. I prefer to take chances” 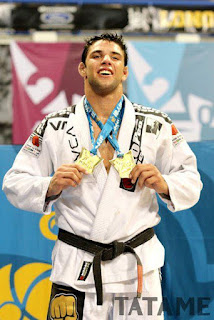 Marcus Buchecha was the big name of the Jiu-Jitsu Worlds, held in California. The athlete of Checkmat won the Ultra heavyweight, submitting Leo Leite and winning the decision in the absolute, in a dramatic final in front of Leo Nogueira, when he was losing the fight until the final minutes and got the upset. In an exclusive interview, the black belt, very emotional, talked about his season and his preparation to reach the highest place on the podium. Check it out:

What are you feeling now?

I do not even know what to say. It feels amazing. I sat there and cried and could not believe it. But in fact, I trained hard for this. It was really sacrificing your workout. Several times we ended up fighting. Much stress, many people together, a lot of training, but everyone in search of the goal, everyone without their family, everyone sacrificing to be here. Waking up early, making the most of every day, living with all the friends that we do not see in a while. The result was that the camp had no ego. we just had friends, had no one with ego in training. I learned a lot in this camp. I am one of the youngest black belts. Me and Yuri. We learned a lot from the older guys. I can only be thankful. It was the fruit of that labor, the union of the team.

Where was your camp?

It was in the gym Lucas Leite. Most of the guys stayed at his house. He opened the doors for everyone. Cavaca, my master, came from Santos. He not only fought, he came to help us guys. To me, he was instrumental in the corner. Some time ago I did not fight with him in the corner. He was not training and had operated his knee. In Abu Dhabi he wasn’t there. He is amazing to me. He knows what I am able to achieve. He believes in me more than I do myself, so I think that this win is dedicated to him and my father, who always believed in me so much, and my mother. Leozinho Vieira was there again. He made a difference and helped everyone. The smallest details were built for me to get here.

Everyone was impressed with you. You were flawless in the World. Did you have some secret?

Last year I only had one year at black belt. I lost to Leo in the final, by decision. I had never tied a fight in my life. I promised myself I would never fight to a draw. Either I would lose or I would win. That’s what I did: I preferred to take chances. I took two sweeps, was losing 4-0 and advantages, but I was risking. The fight was not stopped and that’s what I stand out: I could chase, turned the fight and was champion.

I just mounted. It was five seconds to finish. I was still trailing so I mounted and it was enough to get the win (laughs).

Returning to the category, how many fights have you done?

This category was an honor to fight. I signed up but never thought I’d have to fight Pé de Pano and Leo Leite, who are old school guys, all world champions, 2x absolute champions.  In the first fight, I managed to get a by. The second was a guy of Gracie Barra, Brasilia, and I got a submission. The second was with Igor Silva, a great friend of mine, very tough. I managed to finish with a leg-lock. The semifinal was one of my idols. The first magazine I bought from Jiu-Jitsu, he was on the cover. My father has the magazine today in the living room. I took a picture with him to be sent to my father. My father will be jealous. It was a tough fight. I managed to get his back after he sweeped, tried a guillotine, and it ended 4-2. I was honored to be in the last fight of his career. He says he retired. For me, it was an honor. In the end, Leo Leite from Alliance, is a tough guy from the old guard.

And one of the natoanl team Brazilian judokas.

A judoka. I managed to exchange standing because I thought I was able to surprise. I managed to scrape a takedown. I don’t remember much about the fight. I know I could go and ride the mount finally got a submission on the arm.

You remember how the campaign was in the absolute?

The first fight was with a very heavy guy, I was fortunate to finish him in 20 seconds. The second was with a buddy of mine from Gracie Barra, (Roberto) Tussa. A really nice guy, nice to have fought him. I was lucky to make a triangle very quickly. I managed to finish well. Then it was with Rodolfo. It was a tough fight, I ended up winning by 8-7.  I managed to beat Bernardo. I took his back, managed to finish after being winning 3-0. The final was with Leo Nogueira. He opened 4-0. And I won at 6-6 by advantage.

It was a fight that you had wanted because you lost to him last year. How was it?

I wanted revenge and we trained together since we were blue belts. We are from the same city: Santos. I trained a lot with him. I was young and he was already a world champion. We trained very hard. It turned out that we changed our team, we went to different teams, but since then the friendship continued. He beat me by decision last year.

Vitor Belfort has invited you to MMA?

In fact, I trained in camp with Vitor. I helped him to fight with Anthony Johnson. Durinho inspired me. I went there, I trained, I felt the taste of MMA. I liked it. Now that I got the absolute, I can not go out like that. I have to continue.