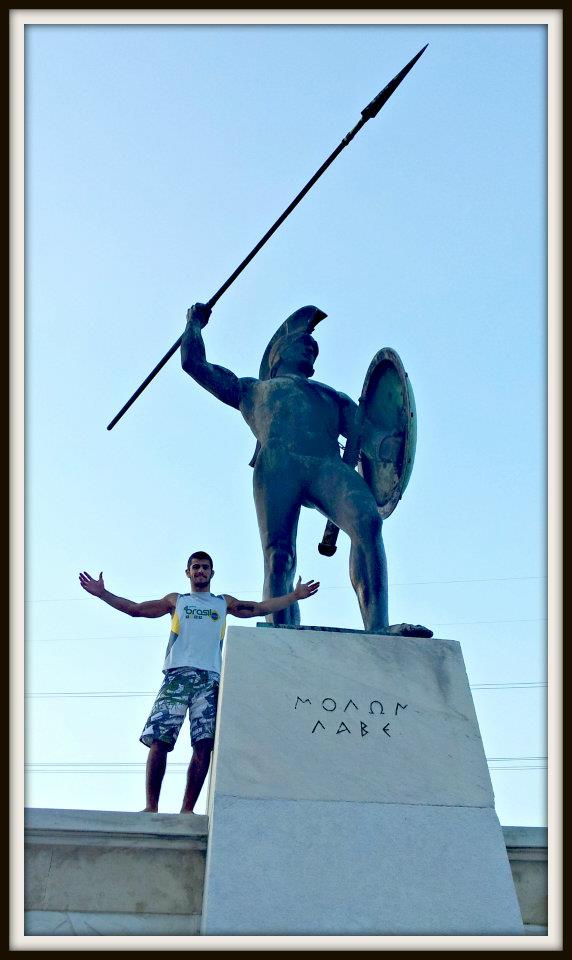 1.Hi Gabriel, can you please introduce yourself to the BJJ community of Eastern Europe

I have two brothers, first the older Marcelo Oliveira started training in 1998 and after he introduced my other brother Rafael Marangoni, he stopped with bjj. Rafael continued until now and introduced me in november 2005 and I’ve always been learning with him everyday… we were under some teams like De La Riva with Roberto Matsumoto, and after in Brasa with Marcelo Fráguas.. and now we’ve changed to Checkmat and this is doing all the difference in our lives with a lot of hard training and good opportunities, like this one where I came to Greece to teach and give seminars, making a lot of new contacts.
In my career I’ve earned the yellow, green, blue, purple, brown and my black belt in 2010 at the podium of World Championship while I won my category at light feather division… Now I’ve been a  black belt for two years and trying my best to pass on my knowledge to all the others.

3. Please tell us about your BJJ Tour of Europe where you traveled, trained in competed in various countries?

I arrived in  Europe on 9th of May. From the beginning,  I was supposed to teach BJJ in the city of Lamia, Greece in but in  August it was vacation time so there weren’t many people training, and also I needed change my visa to keep me in Greece for three more months so I went to Turkey to extend it. I also used that time to travel around and see new places. In turkey I trained with Corvos Academy with my friend Burak Deger Bicer and his students and the academy was a very nice structure. After that, I went to Romania for the ADCC Trials by invitation of my friend Tudor Mihaita from Absoluto BJJ. It was a great experience for me. I did good matches there. 3 in my weight class and 4 in the open class, and I submitted 5 opponents and beat 2 on points and won both categories. After that I met up with my master Rodrigo Cavaca in Bulgaria for a training camp with one of our afilliates Real Pain with the owner Hristo Hristov in the mountains of Bansko. It was a great time there with a lot of trainings with new partners. After that we (Cavaca and me) went to London for a couple of seminars and lessons with other friends from Brazil at the academy called London Fight Factory with Luiz “Manxinha” and Marco Canha, also was a great training and great times.
And now this week (13/10) I’m going with two students to London again to compete at London Open and European Nogi (20-21/10) at IBJJF and then after that one more trip to turkey for a week of training camp and then go back to my old life in Brazil!

4. Please tell us about your academy in Brazil, and how is it training together with Check Mat team mates such as Rodrigo Cavaca and with beasts such as Buchecha?

The training in Brazil is amazing… different than in the other places..Actually I live a little far away from the academy of Rodrigo Cavaca, so normally I train with my brother Rafael Marangoni and our students during the week.. and sometimes I train with them in Santos city with Rodrigo Cavaca, and his teammates. I can’t describe how strong is the training there.. you feel like a child between so many monsters but it is perfect if you have a objective to be a champion.

5. What were your impressions of Jiu-Jitsu’s development in Eastern Europe?

It’s growing day after day. it is great that a lot of guys from wrestling or other martial arts are coming over and they have a good conditioning for the practice of BJJ. They just need more support like instructions about new techniques all the time, seminars, tournaments and if they had a chance travel to Brazil to see how we work there.

6. How would you define your teaching style and your type of Jiu-Jitsu?

When I’m teaching I try to apply discipline to my students and sometimes it is so much that I need send the guy back home, but I think it’s necessary for your career (to be disciplined) when you’re an athlete. I guess it is so important also to give a big importance to all the details in each position so that they don’t make mistakes in real situations.  My type of jiu-jitsu is to prepare myself as much as I can in all the points like mental aspect, technique and physical. I like lifting weights and doing physical preparation to strengthen my body. Another activity is the Indoor Climbing, it’s good for my grips and relaxes my mind.

7. I see that you train rock climbing. In your opinion, how important is cross training in other sports such as judo, wrestling, strength & conditionning, rock climbing if your prime goal is to improve in jiu-jitsu? How much time do you think we should spend on such activities instead of training jiu-jitsu?

In 2012, I’m finishing now with this tournament in London and come back to my normal life in Brazil again. For 2013 I’m coming back in the main events of the year like European, Brazilian Nationals, Pan American, World Championship and few others in the second semester.