World BJJ Champion Alexander Trans: “I want to win all the main titles at black belt, then make it to the UFC” 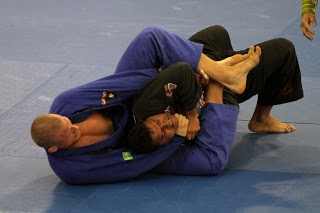 We were very lucky to get a exclusive interview of one of the top European grapplers in recent history, the Dane Alexander Trans, from the Checkmat academy in Copenhagen (Arte Suave). Alexander made a name for himself in the lower ranks of BJJ by conquering almost every important title in the international calendar before receiving his black belt from Leo Vieiraon November 2011. Here are his main achievments so far:

Thank you. I was confident that I was going to win, but I knew that it was going to be difficult. I felt the difference in level from Brown Belt to Black Belt. I made some mistakes, and gave too much space in some positions. In Black Belt your mistakes become more apparent. But overall I think I did alright, and it’s a very important title to me. 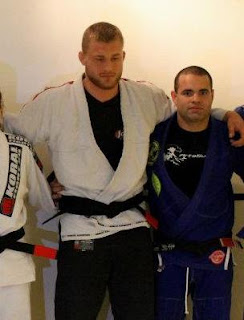 2.Since getting your purple belt a few years ago, you went on a tear and started winning all the tournaments all over the world. What sparked the change in you to dedicate yourself full time to jiu-jitsu?

I always loved Jiu-Jitsu, and I always had dreams of winning the big championships, but I wasn’t with the right people back then. My teachers always told me that I was never going to make it, and the training wasn’t serious. Then in 2009 I joined CheckMat, and started winning some competitions around Scandinavia, and in 2010 I decided to try and see how far I could go. Since then I’ve won 25 titles, 17 in IBJJF. The European Open in 2010 was my first big championship. After the Mundial in Purple Belt in 2010, I started traveling to Brazil to train, and when I got my Brown Belt, I took my training to the next level. I didn’t just change my training routine, I changed my whole lifestyle. Today I live a very calm and disciplined life.

3.The last time I saw you fight live before this year, was at the Europeans in 2010. Back then you were a purple belt fighting at super heavy (-100,3 kilos). Why did you decide to go up in weight and has the weight gain affected your game in any way?

I’m a tall guy, I have a big frame, I just used to be really skinny because I had a very unhealthy lifestyle. In 2010 I started eating properly, taking supplements, and lifting weights regularly, every week. I was 102 kg already in the spring of 2010. Before the European in 2011 the weight cut was too much, I could barely eat the last month leading up to it, and I had to sweat a lot the day before the fights too. When I started eating again after the event, I went up to 107 kg in like a month, and then I decided that it was better for me to move up a category.
My philosophy is that you should fight at the weight where you feel comfortable. There’s no point in starving and dehydrating yourself down in weight if you end up becoming too weak and gassing out after the first fight. And either way, it’s impossible for me to go down in Super Heavy again, because I’m like 114 kg.

4.At the moment you are training in Brazil. You will have a busy schedule ahead of you with the Pans in March, the World Pro in April, the Brasileiro in May and the Worlds in June. How are you preparing for these challenges, and where are you training in Brazil? 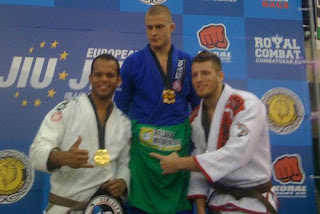 I’m training in Joao Pessoa, in Professor Helder “Bob Esponja” Medeiros academy. I will be staying here until the Mundial. I found my home in Brazil here. It’s a small city in the state of Paraiba, in the Nordeste of Brazil. The city is very calm, there aren’t a lot of distractions like for example in Rio, that helps me stay focused, and be disciplined about my training and my life in general. The training here is really great, there is a lot of really skilled guys here, and I have some Black Belts here to train with who are close to my size, which is difficult for me to find. Besides that, everybody here are very friendly, and nobody treats me bad because I’m a gringo, like I’ve experienced some other places.
I’m training 3 times a day Monday-Friday, Jiu-Jitsu in the morning and night, and lifting weights in the afternoon. Then I do some kind of cardio training on Saturday, and Sunday I rest. I want to keep the same pace until the Mundial.

5.We often see you playing a strategic game in competition doing very often the same thing in your matches (Pulling deep half, waiter sweep, toe hold), can we expect to see new aspects of your game in 2012? 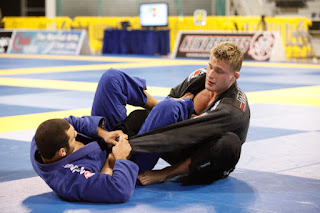 I think the big difference in my game is that my passing has gotten a lot better. I worked a lot on my top game. I’ve always had a good base on top, but I was missing some details on how to put pressure. I used to feel uncomfortable when guys put me in Spider-Guard, and I had to stand up to defend and pass, but now I feel comfortable there as well. I still prefer to pass tight though, putting a lot of pressure on my opponent.
As for my Half-Guard, some people think that I only do 1 sweep, but actually I have a lot of different positions from there. It’s just that in Purple Belt I swept everybody really easy with that sweep, so I just did it every time. But it’s not my favorite position. At the European this year, I did a different sweep in each of my matches. Which sweep I use depends on how my opponent puts his weight, and how he reacts when I start moving. But I have a lot of positions from there, I have some new ones for this year as well, I hope to be able to show them in the next championships. 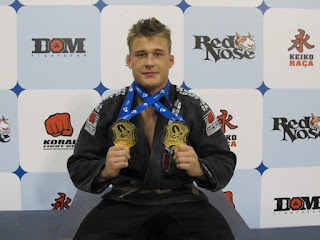 6.Have you set a plan with your career with exactly what you want to achieve (what are your goals), and is MMA is possibility down the line?

Winning the European Open was one of my goals. The rest are Pan, Brasileiro, Mundial, World Pro Cup and ADCC. If I achieve that, I want to start fighting MMA, and hopefully make it to the UFC one day.

Thank you Alexander for taking time to answer our questions and best of luck in your competitions in 2012.

Thank you! I would like to thank Fukamuni Racing, Keiko, Knockout Sports for supporting me. If you are interested in reading about my training, please visit my blog on www.mma-connection.com. You can also contact me at alex.bjj.dk@gmail.com.