Tudor Mihaita, the pioneer of BJJ in Romania 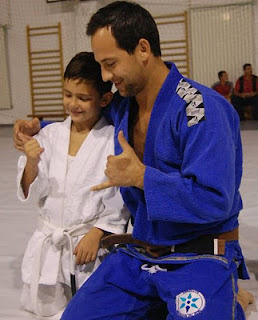 1.Tudor, tell us a bit about yourself, where are you from, how old are you, what do you do for a living?
My name is Tudor Mihaita and I’m form the country of Dracula  Meaning, Romania. I’ll be 35 years old on 15th of February. For a year my daily job is jiu-jitsu, a dream came true. I worked as a journalist since 16 years old and I gave up on it when I opened last year my own gym. I still commentate UFC, K-1 events etc. for Romanian’s biggest TV station: Pro TV.

I started BJJ in 2003. After I entered in a tournament as a white belt in Judo and tapped four BJJ black belts. I’m kidding, I found about it like 99.99% of the people involved in this martial art: watching Royce whoop some ass in the first UFCs. Back then learning BJJ was very hard. There was nobody doing it in Romania and the material wa shard to find on the internet. So, I started spending 7-8 hours per day on forums and oppressing my cousin on some mats in my living room. I traveled a lot to Italy and Spain to train in different gyms, but I’m mostly self-taught. In 2004 I opened a small gym where people could train with me and gave it the name: Absoluto BJJ. In 2006 I met my instructor and my biggest support over the last years, Eddie Kone, a black belt under Royler Gracie. He was back then a brown belt and he came to Romania 4-5 times per year for seminars. He is one of my best friends and I will forever be grateful for his unconditional support.

3. Since you run a successful MMA/BJJ school, do you still have time to compete?

I still have time to compete, but I don’t have time to train  I’m more interested in the results that my guys get. But last year I took silver at the Europeans and for this year I had a busier schedule with jiu-jitsu and conditioning training cause I wanted the gold. But I got disqualified in my first fight. I have the fight on youtube and you can see how you can work your ass out, make big plans and have a ref screw everything with the wrong decision. But I’m not mad at him, he didn’t have his binoculars with him 
4. Which do you enjoy more: teaching or comepting? and why? 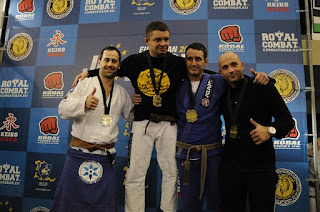 I love jiu jitsu. Everything about it: teaching, sparring, competing, watching fights, watching instructionals, talking about it etc. But teaching has a special place in my heart. I think life is about three big things: BELIEVING, HAVING FUN and SHARING. With teaching I’m trying to make others accomplish this three things. Being a champion is about pulling the best out of yourself, creating champions is about pulling the best aut of more than one person. Champions are not just guys that have a piece of metal around their necks.

Champions are guys that lose weight, become more confident, make their life or that of others better etc.

5. Whats next in store for you in 2012?
We have over 200 medals in competitions most of them gold. Of these 4 are at the Europeans, with Camil Moldoveanu winning his division three times in a row at white, blue and purple (adults) and with Remus Corbei getting gold two years in a row at blue (master). This year we will compete at the Mundials and we hope for some medals. We are also 10-1 in MMA and we want to improve our record with three very talented guys: Ion Pascu, Ciprian Chiru and Alin Pica, who will make his debut this year. So, to be more concise, medals at the Mundial and new wins in MMA 