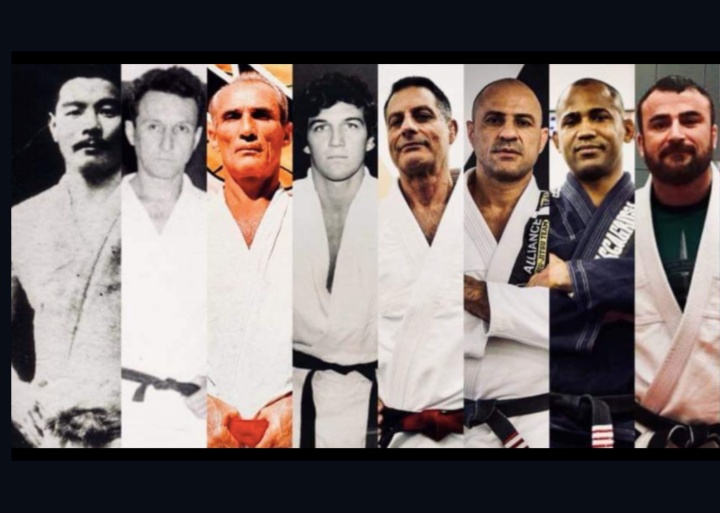 The history of Jiu Jitsu is a fascinating subject, one with many implications for the present-day martial art. However, it’s also full of unanswered questions and polemics – one of them being about the complex BJJ lineage. Luckily enough, Robert Drysdale has undergone through some heavy, 3 years worth of research on this topic for his up-and-coming „Closed Guard: The Origins Of Jiu Jitsu In Brazil“ movie and book.
With that, he has published an image of the currently most up-to-date Brazilian Jiu Jitsu lineage to Instagram.

We’re sure that you’ll find the lineage (at the bottom of the page) and our conversation about it interesting!

BJJEE: First of all, thank you for sharing this lineage with us, Robert! Looking back on creating it and – generally – the work you’ve gone through while working on the movie, what was the most difficult thing to figure out… To understand and „put in its right place“?

Robert: You are welcome. I believe the most difficult obstacle was choosing who to insert and who to leave out. It is impossible to name everyone who has played a role. So in some ways, by writing this lineage I feel we have repeated the same mistake we set out to correct, namely our avowed purpose of giving credit to all those who played a significant role in the development of what we now call BJJ. But we decided to release one anyway because we felt it would help the BJJ community better understand its roots.

BJJEE: And so, when our readers are looking at the lineage you’ve posted, what do you hope that they will pay most attention to?

Robert: To begin with, the more simplistic a diagram of a lineage is, the less it says about lineages. A real lineage would be more like a “bush” than a straight line. And I believe this, at least to some extent, comes across through the diagram we wrote. I really hope people understand the complexity of the process. The complexity means it is more work to grasp BJJ history, but at the same time it thoroughly enriches the narrative, so the exercise of understanding history is a very rewarding one. At least to me.

BJJEE: So, the continuous search for understanding more of the history has been the driving force for you. What is, therefore, the most interesting and exciting thing about the lineage to you? Perhaps something you found out about but weren’t expecting at all?

Robert: I think people will immediately notice that Carlos Gracie had other, up to recently unknown, instructors and that Luis França (despite repeated unsubstantiated claims) has no direct linkage to Maeda but rather to the Gracie Academy – so that was a surprise to me as well, since I always thought (because I made the mistake of believing internet articles without verification) that the Fadda’s were a non-Gracie lineage. To me personally, the early days of the Kodokan is a very interesting period but, because I don’t read Japanese, I know very little about it and if there is one thing this research has taught me, it is not to trust secondary sources.

BJJEE: The lineage is, arguably, incomplete. What are the missing links to it? Is there something that is „painfully“ missing; so much so, that it could (theoretically) change the way we look at the entire lineage right now?

Robert: Based off what is published, I can’t really think of anything that would drastically change the lineage. The only things that may prove aspects of this lineage incomplete is that people like Luis França and Carlos Gracie may have had other instructors as well (same with other characters of the lineage). People learn from many sources, including training partners and videos (books, in those days). So the whole discussion is complex. There is much speculation about who Maeda taught. Did Count Koma really teach Bianor Oliveira? Mario Aleixo? Carlos Gracie? Luis França? Donato Pires dos Reis? Possibly, but we need more conclusive evidence before we can say so. This is standard in historical research. We know for a fact that he taught Jacyntho Ferro, Waldemar Lopes, Raphael Gomes, Guilherme DelaRocque and Dr. Matheus Pereira because we can verify these relationships quite easily.

BJJEE: Finally, you mention that lineages are overly simplistic ways of looking at history. Why? What is more important than lineages, for us to understand the history of Jiu Jitsu?

Robert: Far more important than lineages is understanding not only the characters themselves, but rather the events as well as the time and place in which these characters are inserted, their motivations, rivalries and ambitions. BJJ history isn’t merely about who taught who, but who did what and under which circumstances; as well as understanding their shifting motivations in time and space. This, of course, makes it more complex but all the richer.
Ultimately, the discipline of History is a window into better understanding those who came before us so we can better understand ourselves. It is extremely poor, as well as a disservice to the efforts of those who came before us, to think of Jiu-Jitsu merely in terms of its technical canon.

BJJEE: Thank you for the wonderful insights, Robert. It’s been a pleasure talking to you once again.

Robert: You’re welcome and thank you for covering this.

Check the lineage below and Robert’s “Opening Closed Guard” book on the following link: https://www.closedguardfilm.com/shop/

As I argue in my book, lineages are overly simplistic and arbitrary ways of recounting history. For these reasons, I was hesitant to publish one. I decided, however, that simplistic as they may be, they can help tell the narrative of Jiu-Jitsu in Brazil in a more complete way. What I have included below may prove incomplete (and perhaps incorrect) in the future. Also, as it would be impossible to name all of the instructors, I decided to stick to the ones whose lineages were most influential. Additionally it should be noted that the size of the rectangles or the order of names does not reflect the relevance of these characters in the overall history of Jiu-Jitsu in Brazil. Lastly, given what is available in print, this is as close to an accurate Jiu-Jitsu lineage as we can get. #Bjj #jiujitsu #berkut #acamma #grappling #history #documentary #film #nogi #gi #fight #mma #ufc #closedguard