The Dagestani Brown Belt that Shocked the World, Abdurakhman Bilarov : ‘I’m Not Going To Stop Here’ 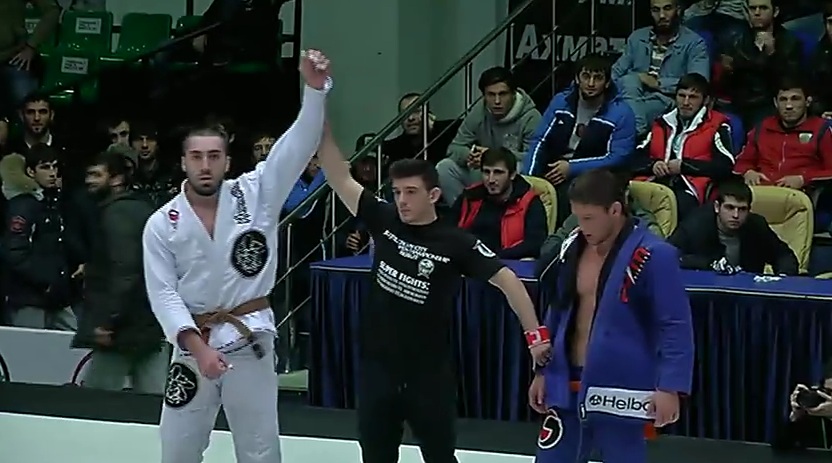 Remember the name: Abdurakhman Bilarov from Dagestan. He made a huge impression last weekend in Chechnya at the Berkut challenge where he beat three black belts, submitting the ultra heavyweight Mauricio Cristo from Cicero Costha and deafeating multiple world and Pan champion Claudio Calasans.

Dagestan is a republic of Russia, located in the North Caucasus region. Its capital and largest city is Makhachkala, located at the center of Dagestan on the Caspian Sea. Dagestan has a strong combat and grappling sport culture. Wrestling and Sambo are very popular sports trhere among the youth. Khabib Nurmagomedov the UFC fighter in the lightweight division is from Dagestan.

People all over the world were asking what had happened and who was this fighter from the Caucasus? Could he be the next big thing in Jiu-Jitsu? BJJ Eastern Europe tracked down the beast from the East and here is what he had to say:

1. Abdulrahman first of all congratulations on winning the gold at the Berkut challenge . Can you please introduce yourself to the BJJ community?

I want to thank all those who congratulated me and those who were rooting for me.
I began to train in BJJ four years ago in Dagestan , gradually moved from wrestling to jiu-jitsu and started under my current coach (Rafael Haubert) two years ago.
I mainly train and teach in Dagestan with my friends and often go to Dubai with my coach Rafael Haubert. Now I am brown belt and double World Pro champion at purple belt and blue belt.
I am from Dagestan. I come from wrestling and my friends asked to try Jiu-Jitsu and I realized that this sport suited me in style and stayed to train Jiu-Jitsu.

2. What did you think of this tournament and about your performance? You defeated some very experienced black belts including world champion Claudio Calasans. How does it feel and how much confidence does this give you for the rest of your career?

At this tournament, I faced famous black belts for the first time . I went there with brown belts that I got after winning the World Pro at purple belt last year. I think they did not expect me to  put up such a struggle. In the first two fights I put tactics to finish ahead and that would create a psychological burden for the final. I got it in the final I defeated a famous athlete (world champion Claudio Calasans).

This victory over Claudio shows what my Jiu-jitsu is growing. This victory is undoubtedly the most important victory in my life I’m not going to stop there. I will continue in the same spirit to train more than before. 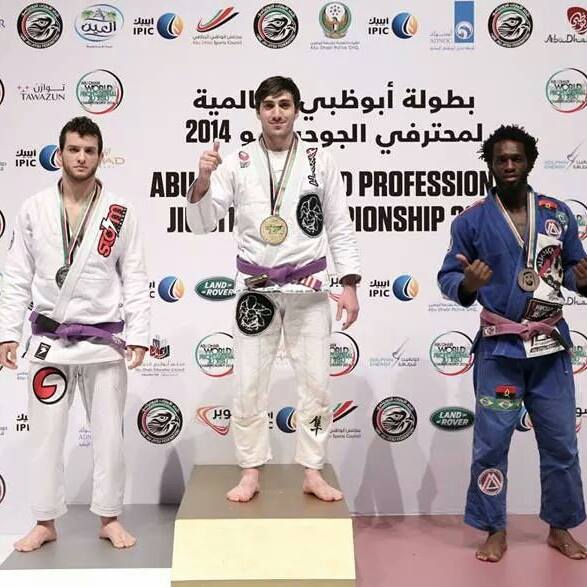 3. I watched a few of your matches and was really impressed by your technique. Tell us more about your training regimen and about the academy where you train?

Trainings are held at the Academy Abubakarov in Dagestan. Closer to competition we train twice a day, and pay special attention to conditioning. We do CrossFit, recently very popular kind of training, all kinds of drill. We also do heavy lifting, but not for long as technique disappears and so does flexibility, which is important in grappling and Jiu-Jitsu.

4. What do you think of the BJJ scene in Dagestan and Chechnya?

Brazilian Jiu-Jitsu is quickly gaining popularity in the Caucasus. I think in a few years you will see our athletes doing well at black belt.

The plans for the 2015 are World Pro in Abu Dhabi in the brown belt and competing at the worlds and ADCC. These are my main goals. 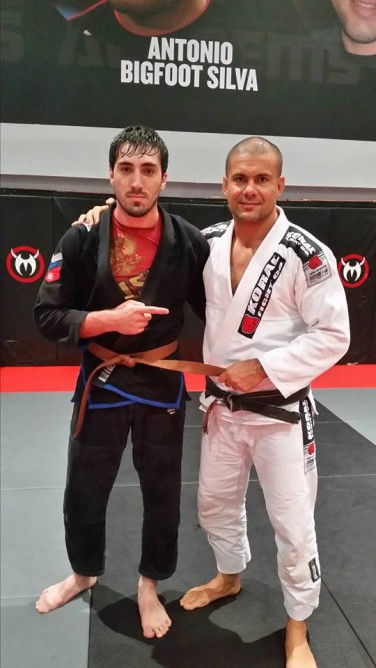 Abdulrakhman with his professor Rafael Haubert

I want to thank my friends who helped me to prepare for this tournament. I just want to thank Team Nogueira Dubai, Abubakarov’s club. I want to thank Berkut bjj for a good tournament thanks to everyone who congratulated me and involved in Jiu-jitsu. My name is Abdurakhman Bilarov Oooossss!