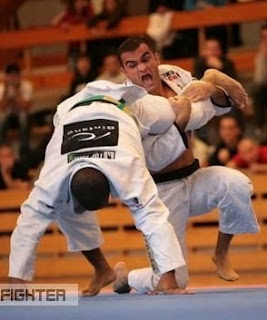 1.Hi Arben, can you please intro yourself to the BJJ community of Eastern Europe

Arben Latifi 37 years old, my parents are Albanians from Kosova. I was born in Sweden. I am a black belt from Leonardo Vieira since 2006. I belong to Checkmat Bjj in Malmö, Sweden. My main titles are Golds in the European Open BJJ, Panamerican championships, and international masters championship.

I have a background in boxing and judo. In 1998 I started competing in the Swedish organization Shootfighting. After some successes there, I came in contact with Leo Negao and Leo Neves from Rio. I also started training for Leonardo Vieira. In 2000 I competed at the European championships in London and won gold. I started my professional MMA career fighting in Finn Fight and M1 with wins in both organizations. My goal then was to compete in BJJ and win as much as possible, it resulted in 2006 I got my black belt. in 2007 I had children and felt that the focus was to be directed there than on training. Now I am a trainer for my brother Ilir Latifi.

3.Swedish BJJ is Considered to be among the best in Europe. Why do you think BJJ is of Such a high level in your country?

In Sweden, we have good training opportunities and we are very interested in martial arts. We also had alot of black belts from Brazil that have come to teach here and putting the level up.

4. What can you tell us about your academy in Sweden and about your most Successful students?

We are a Bjj and MMA club with a few hundred members and with sister clubs throughout Sweden. The main instructor in BJJ is Peter Blackwell. In the MMA club we have success with fighters suc as Ilir Latifi, Malik Arash Mawlayi, Pascal Mazza Ramsby and Yosef Ali Mohammad.

5.I have heard That you were running a social program for unfortunate kids. Can you tell us more about this?

Since I was born and raised in an immigrant area in Sweden there were often social problems so it was natural for me as a leader and role model to try to give back to the neighborhood where I grew up. We try to help young people by being at rolemodels and give them hope for a better future.

6.What are other BJJ players That You admire, and why?

There are many who have inspire me in BJJ but I must say nobody as much as Leonardo Vieria who taught me the concept and ideas about BJJ.

7.Can you tell us about your Kosovo Albanian roots? Do you go to visit? Do you follow the progression of BJJ and MMA in That Region?

I visit Kosova almost every year since I have family and friends there but I have to be honest and say I do not know much about other Albanians who train BJJ.

8. How does Wrestling aid your Jiu-Jitsu? What do you think of guard pullers?

Wrestling has given me a good base and a good pressure in my game. One must adapt their bjj for situations where the guy pulls guard belongs and there shall not be any problems.

I have no favorite submission, but rather I like to play a top game.

It’s the same here, I have no favorite combinations rather, I like to check the feet, knees and hips to get past.