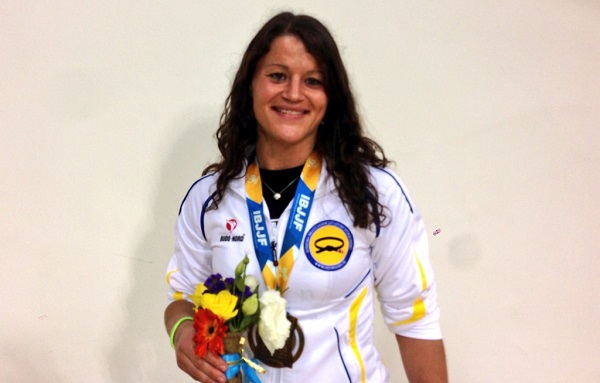 The first Swedish female black belt in Brazilian Jiu Jitsu, Ida Hansson is also one of the top competitors of her generation, having fought throughout the world, medalling in some of the world’s most important grappling tournaments. Hansson fights out of the Checkmat team in Denmark (Arte Suave) one of the top high level BJJ academies in Europe. Read her full bio here from BJJ Heroes. In this interview with the excellent Swedish website grapplingbloggen.se (in Swedish), she talks about her performance at this year’s IBJJF and FILA Grappling Worlds and her role as a IBJJF referee:

“Congratulations to the bronze medal at the BJJ ​​World Championships, can you tell us about the matches leading up to the bronze?

Thank you so much! I only got two matches in my weight class, unfortunately. In the first match, I met Penny Thomas from Gracie Humaita. We have met on ADCC before when I won via submission, so I think she was craving revenge. The match started with her ​​surprising me with a roll and she takes the lead 2-0. We are stuck in the 50/50 for quite some time, she is very smooth, so she is stuck in my head for quite some time before I come out. I go to a kneebar from the bottom when the match is almost over, then I hear Leo Vieira shout from the side that I’ll come up and get the points for the sweep, I get on top with just seconds left and win the benefits of the score at 2-2 and am completely depleted, it was a tough match. Just 20 minutes later, it’s time for the semifinals against a girl that I have met a few years ago in Brazil, and won over the time. I’m still tired after the matches I’ve gone during the day, we pull guard at the same time, after two penalties, I choose to get up in her guard, I get stuck in her spider guard and will not pass, gets wrapped and lying on the ground for a while before I sweep back her. I get no points for the sweep when the judge did not feel that I have control over her for three seconds before she gets up. I’m trying to throw her, but time runs out and I lose 2-0. I’m still pretty happy with my effort, I went two good matches in the open class earlier in the day. I twisted my knee in the first game and was afraid that I could not continue, but it was luckily. A bronze at the World Cup can not be unhappy with, although I had hoped for better.

In 2012, were you going to give up competing, but now you are “back.” Can you tell us a little about how you have put on your elite investment.

The biggest difference from before is probably my approach to training. I work out about as much now as I did before, except that I only train when I want to. If I have a night when I really do not want to go to the club so I stay at home instead, or if I want to do something different than training a Friday night, I do it. There has not been much difference in practice because I love to train and love training hard. I like the preparations before a big competition and see how to get in better and better shape and developing technically. My club mates and teammates from all over the world are a big part of this, BJJ gives me so much and makes me want to push myself more, not because I have to, but because I want to.

Janni Larsson was a Star of BJJ World Championships and took home gold medals in the brown belt class in her weight class and the open weight class. You who trains with her ​​daily, what have you to say about her development?

Janni has evolved at lightning speed, it’s been great fun to stand on the sidelines and watch this. The first big progress, I think she made ​​when she was 4 months in Santos up to the European Championships this year, after that, she just continued to rise. But really it’s no surprise to me Janni always practices, often two sessions a day and hard work pays off. I think Janni will go far and win a lot more than I have done. I’m very happy to have Janni to train with, along with Shanti and Camilla, we’ve probably Europe’s best female team, which other club can boast of having two brown and two black belts on the women’s side? We help each other and together we have gotten to the level we have today, without each other, and our club would not have been possible.

You and Mark Widengren are the first Swedes to referee at the IBJJF worlds. How did it feel?

It was great! I consider it a privilege to be a referee at the Worlds. It shows that we are on track in Sweden and that we maintain a high standard.

Both you and Markus refereed at the European Open this year. Was is the first step to then have the confidence to judge at the Worlds?

I think so. Both me and Marcus refereed there and it went well for both of us, so I think that was what made ​​that we were entrusted to judge at the World Cup. One should not judge the World Cup if you do not have judged IBJJF competitions before, I know that the League had numerous requests from people who wanted to judge and they declined, so that makes it extra fun after all.

What is the hardest thing about working as a referee?
Keeping the concentration high throughout the day. In the beginning, it is good, but when you have delivered 10 + hours and have seen far too many games, so it can be hard to keep focused. It’s always hard to judge the matches that are consistent when you have two great teams that screams your neck, no matter how you judge it is always someone who is unhappy. It is important to try to abstract from all the shouting, but it can be difficult sometimes.

Do IBJJF referees get paid?
Yeah, we receive financial compensation for that work.”