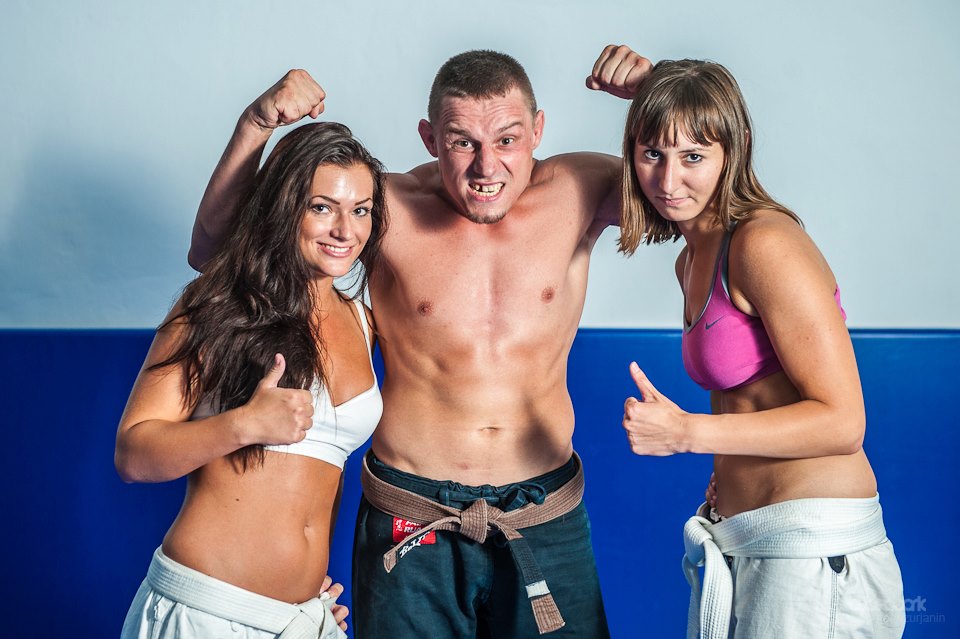 1.Hi Lubo, can you please introduce yourself to the BJJ community of Eastern Europe

My name is Lubomir Repasky. I come from Slovakia where I live, train and teach . I am currently a brown belt under Nick Brooks, Roger Gracie and Jude Samuels.

2.How did you start training Jiu-Jitsu and come to training with Nick Brooks?

I started training bjj almost by accident. I grew up doing a bit of greco roman wrestling, karate, muay thai, and capoeira. So i could say i was always interested. I left Slovakia to live in London and couldn’t find a Muay thai club anywhere around so I looked for Jiu-Jitsu. I didnt know anything about Bjj at that time. I was stunned by the technique of traditional Ju-Jutsu (Japanese) after i first saw it. Luckily for me one of my instructors was Nick Brooks. He wore his Traditional Ju-Jutsu black belt but he already knew that he had wasted 10 years of his life learning that. At that time Nick trained Bjj, for about a year. He got his blue belt after 9 months. So as i said luckily for me, he ran a wednesday grappling class at another venue. I didn’t know what grappling was but went anyway. Since then, even me and Daniel Strauss the kid aka Raspberry Ape were still wearing our red belts in traditional JJ, we already knew what was the difference. We were training with Nick before the class, during the class, and were getting better every day. In a couple of months we were submitting the other guys in training by only blocking, headbutts, hip trow and chicken wing lock. Even beating the black belts. And one beautiful day they all left. I came to train and it was me, Nick, Daniel Strauss and Chris Hearn. That’s how it aľl started. Nick taught still a bit of Stand up clinch, take downs, even jabs and crosses. But NO MORE BULLSHIT. And as the time went by, Mill hill ju jutsu club slowly became Mill Hill bjj academy. My shift at work didn’t allow me to go to every training and it was always on mon,wed,thu so I decided after Nick’s recommendation to go to train at Roger Gracie’s academy. I bought a little scooter and drove there and back as much as I could. Roger and the guys helped me a lot on my way. I stayed for about year and a half but I came back to mill Hill after that. I missed my old training partners, my friends and Nick. After that I left to Slovakia to teach the art that i couldn’t live without.

3. Please tell us more about your academy in Slovakia. What made you decide to open your own place? What do you do differently than other BJJ academies?

I started to teach Bjj in Slovakia on may 1st 2009. I went back and forth from a big wrestling hall to smaller muay thai gyms like Bratislavska boxerna,and Hanuman gym. I really wanted to have a place for us where we can feel at home and that it would breed our bjj so much that it would be rolling from out of the windows. We were always at somebody else’s place and we really needed the independence. Our rules, our times. I wanted it for the guys so that they could come before training or stay after to roll some more, and for those that wanted to be little bit better than the others or those who cannot find time to train during regular classes. It worked out well and after one week of refurbishing, our hall came to life. People love it. I think that they feel like home there. it’s finally our place. Our MMA fighter even said that when he leaves home he says to his mum- “Bye mum, I’m going home”. Even though I shout a lot, swear a lot, do very little positive criticism and have humor that one needs to get used to, it is a very chilled out friendly place.

4.Please tell us about your best students like that we should look out for at international competitions.

We have a lot of guys that I would love to see do great at international competitions. I think that they have the potential. But doing great takes a lot of work, time, determination, focus, money, rest.So I’m not going to name the guys, but I’m sure that we are not short on talent here. Slovaks do good in sports worldwide and that’s why I came home: To find them and to teach them. They wanna compete,and I think they are going to do good.

5.What are other BJJ players that you admire, and why?

I think as Nick started to train with Roger Gracie, he became to understand the simplycity of jiu-jitsu. Like Roger said, “jiu-jitsu is simple,you just have to do it right”. I know that during sparring you can play a lot and enjoy the beauty of Bjj, but on the other hand when you compete it is very much like you don’t want to loose any position, and not loose points so you only use something that you know the best. And with me it’s the basics. So Roger’s aproach worked for me. I’m not the most technical guy around but I will make the basics work. Tightness, pressure, bit by bit, to get to where I want to go. So Roger Gracie had big influence on my Bjj. The people I like are Andre Galvao, Marcelo Garcia, Ronaldo Jacare Sousa,t he Ribiero brothers. They are here to be idolized for all of us.

6. How do you view the progress of BJJ in the Slovakia (tell us about how developed is bjj there)? How popular do you see the sport getting there?

One of the first people to start with Bjj here was Tibor Repta (currently purple belt), now training an running classes at Bjj Slovakia. He started to train at mma academy OFA but wanted to do something less violent and safe. So he got together with a bunch of guys and started on his own. Then he invited professor Bitta for a seminar and he got his blue belt. Tibor continued with the training and got some good guys under his belt. In that time there was couple of gyms in Slovakia. One in Puchov ran by really nice guy called Stefan Hupka and one in Nitra ran by my friend Michal Sobolic. When I came and opened my gym ,Tibor came to train,we sat down and talked. He said he would rather train than be an instructor and that he liked my approach, and that we should rather have one bigger club that two smaller ones. We agreed and we joined the clubs. And this is how it started. We now have around 50-60 people around us. Maybe 40-50 are training regularly.

7. What are your favorite guard passes, and submissions?

My favorite guard pass is the knee slide across pass. I also like the cartwheel pass as well because is fancy and fun. As a white and blue belt I liked to pass very tight so it is still there if I have to use it and now it’s more from standing. Using pressure, explosive movement and control as is needed. I used to use chokes a lot but now my favorite sub is kimura and guillotine. I love to get kimura from anywhere and make it work. Guillotines are everywhere as my good friend Daniel Strauss says.

This year we would like to finish on a high note competing at the Hungarian open and noGi event ran by Michal Sobolic on the 8th of december. Next year we might go to the Europeans if we find somebody to sponsor this trip. For me the next step is the cage. I want to have my first fight in mma in next year. I need to promote bjj this way. I wanna wear the Gi and show this people the dominance of ground game in mixed martial arts. I think is the only way to successfully promote bjj in this country. Everyone wants to be the bad boy and do mma and they dont understand the importance of bjj. Many people don’t know anything about our sport so i need to do this to move the academy forward. I hope it will work out the way i plan and it would bring us more people and more options. Hoping for the best.

9.f you want to thank somebody please feel free

I would like to thank everyone who has influenced my life to help me get to where i am and be who i am. Thanks!