Rodrigo “Comprido” Medeiros on His Recent Retirement, and The Use of Steroids in BJJ 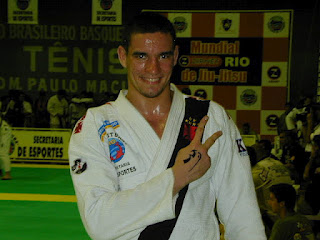 The Excellent Kid Peligro recently got together with BJJ legend Comprido Medeiros and did a two part interview him. Here are the best part of the interview:

“KP- You retired at the last Worlds, what was that like ?


RCM- It was a very difficult decision but it was time. Every year when the Worlds would near I would be trying to prepare better but each time it was getting harder and harder due to the physical condition of the current champions. I believe everything in life has its time, I competed a the highest level for a long time, I conquered titles and records and helped my team partners and I did what I could to help better the sport.

KP- How do you evaluate your career as a competitor?

RCM- I was a 7 time World Champion, I own the record for the fastest submission in a Black Belt finals. I competed against the best and biggest names in the sport, I learned and taught on the mats, I overachieved many times, sometimes I won against better fighters and other times lost against lesser fighters. I never hid from anybody and always faced my opponents regardless of who they were, I was loyal and never used performance enhancing drugs of any type to achieve anything in my life. I won and lost using my own talents and with the body that I was born with no additives!

KP- What competition moment gave you the greatest satisfaction?

RCM- It was in a tournament in North Carolina, the Pro-Am in 2000. I had a very serious knee injury prior to the event but since I had already bought the ticket and there was good prize money I decided to go anyways. I won the first match somewhat easily but in the Semi’s I was facing Dean Lister and with 15 seconds to go he tried a takedown and it twisted my knee in the wrong direction once again, I won the match but I could hardly walk later. The finals was the next day against Saulo Ribeiro, he had submitted all his opponents to get to the finals. I didn’t want to fight but if I didn’t enter the mat I wouldn’t get the 2nd place prize money. So I spoke with Leo Vieira we had an arrangement and I said that I’d fight as long as I could and if I felt I was further injuring my knee I’d look to him to get the ok and I’d stop. So I started the fight kind of dejected and slow and Saulo did a takedown and was up 2 x0. Then all of a sudden my blood boiled and I swept him and did a takedown and I was up by 4 x 2 with 13 minutes to go on the match. I looked to the sidelines trying to get Leo’s eyes and get the nod to stop but he kept moving around and I couldn’t find him but he kept yelling instructions at the same time but I still couldn’t locate him! He knew that I was ready to quit but he also knew that I wouldn’t do it without his consent, the end result is I won the fight and the tournament.

KP- How do you fell Jiu-Jitsu has changed these years? Was the change for the better or worse?


RCM- I believe BJJ is currently relying too much in physical strength and conditioning, that Is Ok if the athletes are achieving that with training. But we all suspect that there are many achieving that with the use of anabolic steroids. What surprises me the most is the reluctance of the Federation, National and International and the Academies to address this problem. They all act as if there isn’t a problem. This only hurts the sport and the athletes. As I stated before the technique remains with you but the power goes away in time. I believe BJJ has evolved technically but I am sure that less steroids would lead to greater number of submission finishes.”