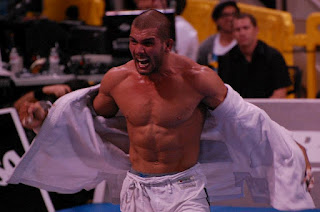 Weight and Absolute Champion in 2011, Rodolfo Vieira comes ready for the Worlds this year, since the athlete from GFTeam shined in Abu Dhabi Pro, beating Roberto Tossa in the final of weight and by beating Andre Galvao 4-2, in the absolute. In the interview below, one of the best passers guard in Jiu-Jitsu revealed  that he has evolved in recent years, the proof was his victory over Galvao in Abu Dhabi. Check out the full interview with the fighter, who pledged to take the weight and Absolute at the World 2012 back “home”.

What did you think of your campaign in the Abu Dhabi World Pro? 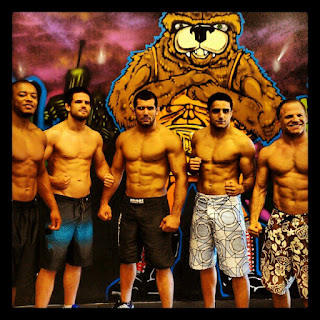 What happened? Many athletes complained about the organization of the event …

We just fought really late on friday, at one in the morning and on Saturday too. I was fighting the first fight there at seven o’clock. The absolute final was almost at midnight. It was a bit torturous for us, but I can’t complain about it. The most important is that the guys are paying us. This for me was nothing. There needs to be a little improvement.

No. This time he did not invite me, because I fought Friday and Saturday. On Sunday, we woke up late and we had to hurry to leave the hotel at 6pm to be in Dubai at nine.

What did you do with the prize money?

The first prize money that I won in Abu Dhabi, I invested in a car, as my dad has a car agency. He bought the car.
The one from this year will be stored in savings. If I need to, or want to buy something, invest in some project then I might use it. But for now, I will not touch it.

You had been defeated by André Galvão in 2009 and revenged that defeat in the best possible way. Was it a special feeling?

No. I was not even thinking about it, because when I fought him it was in no gi, and I’m not very good at no gi. I was a brown belt at the time, was 19 years old, was very inexperienced and I lost. He is very good no gi, and no gi is totally different. I knew I had more chances to win this time. I was pretty confident and was able to win. Not the way I wanted, but I won.

Why was it not the way you wanted? What was the plan?

I always try to finish. Whenever I’m struggling, I’m always looking to do submit. All other fights I finished. The ones that I did not finish, I lead al ot on points. Anyway, we keep moving.

You have shown some nice throws. How is your Judo training? Are you a judo black belt?

I train at Flamengo judo club. I also practice at a branch academy there in Campo Grande, with Professor Gouveia Murilo who gives me a hard time on the feet. There are good guys who help me a lot, correct me, help me with what I’m going wrong and I owe it to them. My standup game has improved a lot thanks to them.

The main focus now are the Worlds? Go to the pursuit of weight and absolute? What will you do differently to avoid being surprised?

I’m not doing anything different from last year. The only thing different is that I’m training more. I am more serious than last year, I’m feeling stronger, more confident. I returned to training this week. After the Abu Dhabi, I rested one week training once a day slowly. Now I am back to training, next week I will travel to Colorado to make a camp there and I will be careful not to injure myself, and will bring the two World titles. I will bring them back home.

When you are close to the competition, which is the focus of your preparation? How is a day of your training?

I had never done a training camp befdore. The only time I did one was for ADCC, but it did not work well. Most guys here have traveled. They have staff in Texas, in Houston, training. They go to Florida, then I go too, Vinicius Marino and Rodolfo Negão. I ‘m going to Colorado because it has a good crowd. My fitness will be a problem. I am without my physical trainer in Brazil.

But my training has nothing special. I do strength, separately, on Monday, Wednesday and Friday only in the weight room, just strength. Saturday is more cardio, the gas, speed, explosion. I do not think I do anything different. I value training Jiu-Jitsu, I train a lot. Training twice, three times per day and I only do one training for speed, multiple passes underneath, above. I think it has made a difference and has left me with more gas too. It has helped me in my performance.