Roberto Atalla On The State of BJJ in Europe, His Years in Poland etc 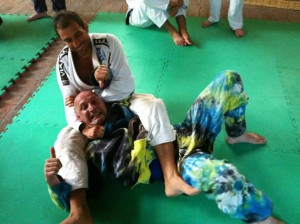 Roberto Atalla is one of the founders of the Rio Grappling Club, an academy that has been producing some of the best European grapplers for the passed few years.

Quick Bio from BJJ Heroes:  In 1990 Roberto Atalla started looking at Jiu Jitsu academies, so he began training in Tijuca (a famous spot for surfers) under Jean Jacques Machado. This was a historical period for jiu jitsu and this academy in particular as many world class jiu jitsu fighters came out of this amazing camp, fighters like Renzo Gracie, Roberto Correa, Helio “Soneca”, Vinicius Magalhaes, Roberto Atalla and many others.

In 1992 Atalla moved to the US for a short while and he took the opportunity to train in California with Rickson Gracie. He came back to Brazil in 1993 a changed fighter, awarding this change to the short exchange with the legendary Gracie. Atalla received his blue belt from the former ADCC champion, Jean Jacques, but the Machado then moved to the USA so “Risada” spent the next few years training in different Gracie academies, spots like Renzo Gracie at “Lagoa” or the “Gracie Ipanema” academy, receiving his purple and brown belts during this period. After an argument with the head coach of Gracie Barra, Carlos Gracie Jr., Roberto felt the need to change academies, and so he moved to the Rio Jiu Jitsu Club, a club that would later become BTT (Brazilian Top Team), there he met another pair of historical Jiu Jitsu figures, Murilo Bustamante and Sergio “Bolao” who would become Atalla’s instructors. He received his black belt in 1998 from Sergio “Bolao” Souza.

Roberto moved to Europe shortly after, a bold choice at the time as he had no contacts in the Old Continent. He stayed in England first where he earned a living giving seminars, later he moved to the Netherlands for a short period before settling in Poland. Atalla’s first plan when he arrived was to stay in London as he knew the language, but the close contact with the polish people opened his heart to the Eastern European nation and so he moved there. The Rio Grappling Club was founded by Roberto Atalla as a homage to the place where he trained before (Rio Jiu Jitsu Club). Atalla wanted to escape the internal politics of the big Jiu Jitsu teams and instead decided to form his own. Today Rio Grappling Club is a strong well established European team with fighters all over the continent. He has currently moved back to Brazil from where he runs his association.

1. Please tell us about your worldwide association Rio Grappling Club.

My team has been around 9 years now and we are growing without losing our focus on quality. We have clubs in Eastern/Central Europe in Poland, Greece, Romania, Bosnia, Serbia and Croatia, as well as in Portugal, Italy, France, Scotland. We have clubs in South Africa and Brasil too, so it all looks good. We have over 70 instructors in more than 60 cities in these countries. All of them are important to me, but the ones longer and more active are Mariusz Koziej, Krystian Kwiecien, Bernardo Serrini, Gianluca Boni and Matteo Callamandrei. All of them are black belts under me. future plans are simple: conquer the World LOL. Seriously, we want to bring our philosophy to Asia and to more places in Europe in the next few years, and hopefully grow stronger in South America too. We are only in 2 regions of Brazil out of 27, so I see many opportunities now that I have returned home.

2.You lived in Poland for 3 years, how did you like the life there and what do you think of the BJJ scene in the country compared to the rest of Europe?

Poland is a great place to live if you can cope with the weather. BJJ is on the highest level. I’ve travelled to 30 countries and nowhere I saw more committed people than there. It is among 3 best countries in Europe if not the first. Many good local black belts and a serious attittude towards training and competition.

Roberto enjoying life in Serbia with his students

I’d say Poland but Britain also is on the same level, Scandinavian countries have great grapplers too but numbers are small if compared to Poles and British in BJJ and MMA. to be honest there is no country in Europe without a good scene, but those mentioned are in the Top.

4. How much importance would you give to cross training in other sports such as wrestling, judo, strength &conditioning, rock climbing etc..for someone who’s primary goal is to get better at jiu-jitsu? If someone can only train 5 times a week, should he just do BJJ or have one session in an other sport?

To be good in BJJ, do train BJJ. If you have plenty of time, Judo and Wrestling are great. Any other activity is nice in terms of relaxing, i love Kitesurfing and Snowboarding, they help my balance, people find that sweeping me is almost an impossible task haha

5. You are currently back living in Brazil. Where are you training, and what plans do you have for RGC there?

In Brazil BJJ is huge, but our group is present in Rio de Janeiro and Minas Gerais. I am not concerned on becoming big, we love to grow organically, with students and former students of me and my friends joining, I want to keep the group tight and united and will not sacrifice that in order to grow. My current plans are to resume organizing BJJ and Grappling Competitions professionally, outside the federations, paying cash to black belts and giving an option for those tired of fighting for medals only. I have done well organised comps in the past and in 2013 we will make it happen again. As for training, I am visiting my coach`s gym in Copabana where my friend Marcelo Kropotkin now teaches. We have associated with Bolao JJ and our guys compete and train side by side in Rio de Janeiro. I also pay visit to Masters De La Riva, Roberto Correa and Murilo bustamante from time to time, but not very often. Those gyms are great and I have friends that I love to train with.

Next in 2012 for me are the scheduled visits to England, Scotland, Romania, Greece, Denmark and Italy. Few guys have entered the London open and I want to support them.

My partner Mauro Chueng who lives in Portugal will visit Poland and Belgium, and our Polih and Italian black belts will also be visiting our clubs to help other instructors; collaboration is quintessential in our group, is part of our mantra.

2013 will be busy for me from January. I will visit Dubai again where a great friend of mine, Rafael Haubert, has a great BJJ club and I replace him for a month once a year. Dubai is a great place, there I have chance to teach locals, Arabs, Europeans, Americans, Australians, Filipino, Brazilians and Africans, all in the same place. It is great for the sport and opens many doors. Afterwards I return to South Africa and next will be our first training camp in Brazil (April, 20 to 28) and hopefully our first big BJJ comp in Brazil (May, TBC). Before Summer I shall return to Europe where most of our clubs are, and we will have a few summer camps in July and August.

Competition wise, we hope to repeat 2012 when our juveniles from Croatia took 1st place at the Europeans, and have a few more guys taking medals in Adult and Masters. We are doing very well in Female divisions inside Italy and hopefully some of themwill go to Portugal too. We plan next year to bring a good team to London too, but is too early to think of it much. We also hope to integrate more Mauro Chueng’s students into our association, but it is up to them to unite and agree on our terms, all his guys from Brasil joined recently (over 100 guys from 5 clubs in Minas Gerais) and this was great news for us

7. Thank you Roberto and all the best!