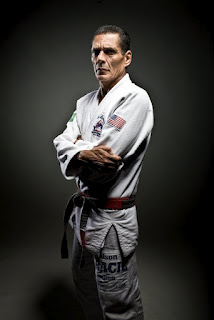 Source: TATAME (translated from English)
Coral belt (Red and Black) in Jiu-Jitsu and son of none other than Helio Gracie, Relson Gracie has lived in the U.S. for 27 years and has never taught in Brazil. Nearing 60 years old, he is working towards a return to live permanently in Rio de Janeiro, where he has opened his first gym in Tupiniquim, situated in the district of Leblon. The samurai received TATAME in his new temple and gave an exclusive interview and full of controversy. Without mincing words, Relson said that Helio faced more challenges than Rickson and said that few people currently practice the pure Gracie Jiu-Jitsu, featured details of his last street fight in Rio de Janeiro, pinned Royce Gracie, among many issues that you see below.

If Royce had not been the champion of the first UFCs, the direction of the sport would be different?

Sure, sure. He would not have shown the effectiveness of Gracie Jiu-Jitsu. Royce was the youngest, most inexperienced, who had the least competed. This had more effect on efficiency than what we wanted to show. With the submissions that Royce did with the kimono with and without kimono, he showed all the flexibility and versatility of Jiu-Jitsu, catching everyone. That was one thing that really convinced the world. It started in America and Japan with Rickson in the same year that Royce in 1993. In mid-1994, Rickson and Royler went to Japan, and there made the opening of the Vale Tudo Open, which then went on to be the Pride.

At the time, Rickson was considered the best. Why was he not chosen to represent the family and Jiu-Jitsu? Was it part of the strategy to choose the skinniest?

The effect was higher. Rickson was seen as a champion, professional in the ring, he had a large number of results in his favor, while Royce didn’t yet. It would be much easier to justify their defeat by saying that they lost to Rickson. Who was Royce? The younger brother of Rickson?
You left Brazil a long time ago and are now returning to Rio de Janeiro, where you grew up.What is the idea?

It’s a step that I’m taking. It’s my life, my way of being and I want to return to Brazil because I think it would have a better end of life here, with all the conditions. it’s a better life with money here.. I’ve been since 1985 until today in America and in these 27 years here, I have never taught in Brazil. I have a gym in Leblon now and we’ll always keep that gym as my father’s gym. This system that I want to introduce to young boys I feel confident that it can defend in the street against a thug. They know they have an answer by this style of defense. This Jiu-Jitsu does not exist in Brazil at the moment.

Do you think that we have lost Jiu-Jitsu that Helio developed, focused on self defense?

Certainly. I just followed what Helio did. Everyone wants to change what he did and say that it is wrong. He was a master, a man who lived for Jiu-Jitsu, who had a physical disability and did the diet to heal and be capable to run the gym, being open and receiving visits that would challenge him. At that time it was only challenges. Capoeira, Boxing, Wrestling … All banged in the gyme. Tests were not lacking for my father.

And with respect to Carlos Gracie, you believe he had the same importance for the Jiu-Jitsu than Helio?

I think my dad was the one who put all the evidence. It was Helio who tuned Jiu-Jitsu to be a technical thing. Carlos started Jiu-Jitsu and spassed it to Helio. Carlos had the merit of knowing first Jiu-Jitsu, but Helio could not perform the proposed system for Carlos because he had no strength. He could not lift his leg and then Carlos said: “Then make your way.” Then he drew his legs and strangled. He made a defense system. That’s what I believe. He was guy such a skinny guy and made the system work. He proved to everyone. He was against Capoeira against Judo, whatever. He proved he was the best. This system of self defense is what I find most important in Jiu-Jitsu. That ground game is good when you have time to do.

If you are a doctor, lawyer, teacher or professor in the university, you can not be a champion of Jiu-Jitsu. Today, Jiu-Jitsu has to have the physical part, has to have time to compete, have to devote six hours to train because the other is doing six hours a day, taking vitamins. A doctor cannot hurt his fingers and can not operate. What will Jiu-Jitsu teach him? He does not want to tangle up, he wants to know that the guy does not take a shot and take the gun, as seen in practical life. Now we go back to the authentic Gracie Jiu-Jitsu.

What do you think of Jiu-Jitsu competitions?

I am against this Jiu-Jitsu competition and I am against these academies that teach MMA directly. I think that a guy on the street with a blue belt in Jiu-Jitsu, can do much more than a regular practitioner of MMA. When they come with punch, they will have a little surprise. This MMA is coming in different ways to teach the art of fighting. Everyone takes a punch. Who doesn’t get hit? Tell me. All of them. Anderson Silva took, Machida takes, they all take. The self defense system in Jiu-Jitsu does not let you take a pure punch in the face.

Who is the new generation of Gracie you like to see fight, do you think represent the family well?

No one follows the Helio Gracie system , I do not approve of anything. I do not see anyone at the present. Royce was good until he switched to karate, Muay Thai, whatever. He started to do these things and went with the style of Muay Thai against Matt Hughes. Royce fought Muay Thai with Matt Hughes, you did not seen him fighting Jiu-Jitsu. I never spoke with Royce after that day because he was fighting Muay Thai.

Who, besides you, is practicing Helio Gracie Jiu-Jitsu?

Rickson, who has been living in Rio and is passing on the teachings, but is very private. Rickson has a system of education that continues to teach Jiu-Jitsu, but a system that he thinks is ideal. He is adept of pure Gracie Jiu-Jitsu. Rorion you can find in Torrance, California. You also have Pedro Valente. But Rorion and Pedro Valente are in part self defense. My defense is personal, but I come with improvements to defenses of positions.

Rorion sold his shares in the UFC, as it distorted the original idea, was it a clash of forms?

He had no way to avoid this change. Everyone took up Jiu-Jitsu and began to add it to their own system. Now Wrestling has Jiu-Jitsu, Judo guy makes Jiu-Jitsu, Karate makes Jiu-Jitsu, mixed. Everyone takes advantage of Jiu-Jitsu and Muay Thai in the fight, but wins by strangulation. I do not see the UFC fighters defending anything. When Royce fought, he would grab and win, but nobody looking for the clinch to put into practice Jiu-Jitsu.

And Royce’s fight with Matt Hughes?

It was a shame that he did not use any Jiu-Jitsu. Are you s*itting me? He f*cks up the fight and disrespects my father. I do not speak with him anymore. Lack of respect to call my dad to see him fight karate! After that I didn’t speak with Royce anymore. He is my brother, but I can’t.

And the Gracie diet, are you an adept?

And with respect to Rickson and his 400 fights. Do you think it is true?

It’s not that I think it isn’t true. The Rickson had these thoughts without doubt. He had fights in gyms, challenges. We know he’s got some 13 fights in Japan Vale Tudo and two with Zulu. The Hugo Duarte one was a fight, but he has 400 street fights. He included the fights of Sambo, included training in the academy, championship, which they call a fight, but they are not fighting, they are training. Fights were 14 or 15 in Japan Vale Tudo, and a couple more in Brazil. He made two with Zulu and a 14 in Japan that were considered fights in the arena. The rest is all practice. It’s what my father said. I’m not saying that Rickson did not have the 400 fights, he had the 400, but in this kind of fight, my father had 5000. My father had a much larger market to prove. My father did more tests than Rickson did!

Read the original article in Portuguese