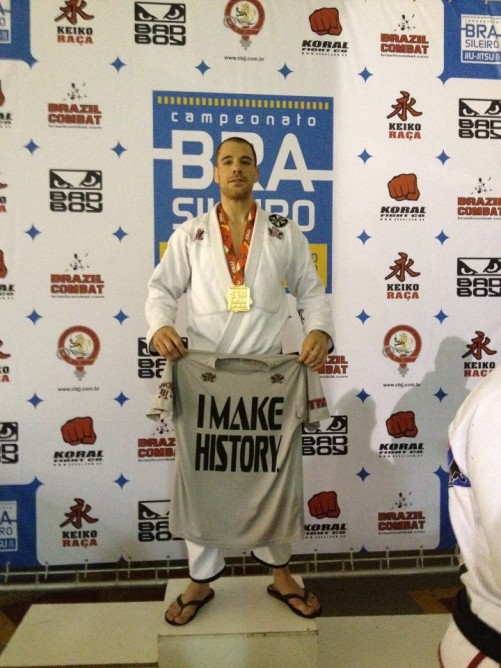 Beating a Jiu-Jitsu black belt in Brazil is not easy, especially if you are not a Brazilian. Only two foreigners managed this feat, and Rafael Lovato Jr, the second one (after BJ Penn), added another chapter to his beautiful story in the gentle art.

In action in CBJJ’s Brasileiro’s held earlier this month in Barueri, São Paulo, the black belt submitted three opponents in his five victories to become the first gringo absolute champion in 18 years .

“I have dedicated my life to this art and making my mark is very important to me. I Had to overcome many obstacles to learn and compete in Jiu-Jitsu. I’m an American from Oklahoma, and there was little Jiu-Jitsu there.” Said Lovato, emotionally.

“I worked hard to get where I am, and now I can inspire others with my passion and struggles. I want to show that anything is possible for you if you try. Throughout my career, I have never won a title in a tournament at absolute in CBJJ and IBJJF at any age, and when I did, it was the Brazilian, making history by being the first foreigner to win this title. This is something special, that I will keep for the rest of my life. ”

In the competition’s weight category, Lovato won the first fight, but ended up losing to Dimitrius Souza by two points. He says that the defeat was unjust, but nothing ends his happiness: “I think I should have won the fight.”

“I had one of my best performances there. I was motivated and inspired to compete again in Brazil. I grew up fighting the Worlds in Rio since the age of 16 in 1999. Since the Worlds went to the United States, I only fought the Brasileiros in 2010, when I got the silver in the absolute … I’ll always have a place in my heart for Rio. I will never forget the incredible fights at the Tijuca Tennis Club, but I liked Barueri. ”

To shine in Barueri, Rafael Lovato had seven fights, winning six. Of the four submissions, three were with the kimura, and he says that this was the secret of his success.

“This time I got very focused to make history in Brazil again, because it would probably be one of my last chances, so I opened my game and played well below and above. I was aggressive all the time, searching for the submissions, “he explains.

Uplifted by the title, Lovato is back to the United States to do the world championship in California and then will proceed to Metamoris, where he will face Andre Galvao.

“I have big goals in a Month: win the World and defeat (Andre) Galvao in Metamoris,” he warns, determined: “Winning the absolute was a great way to gain pace and confidence to the World.”