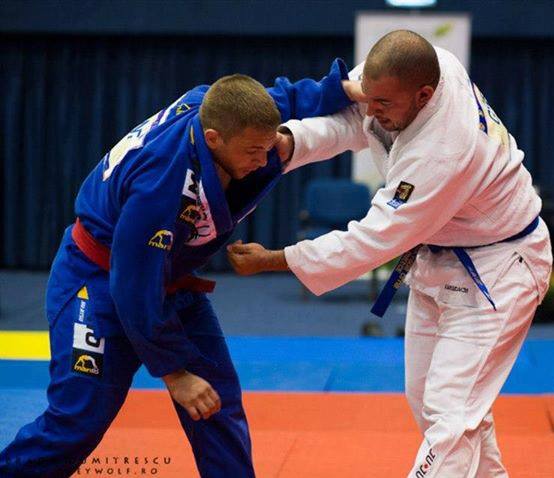 Montenegro’s Mladen Jokmanovic is a BJJ brown belt and team leader of Mata Leao-ATM BJJ Team in Podgorica. He has a deep history in grappling arts as he started with Judo, then traditional ju jitsu to eventually concentrate on BJJ. In this interview with BJJ eastern Europe, Mladen talks about his grappling background, his team, BJJ in Montenegro and competing and training in different grappling arts:

1.Hi Mladen, can you please introduce yourself to the BJJ Community of Eastern Europe?

Hi BJJEE, My name is Mladen Jokmanovic. I am 26. I come from Podgorica, the capital of Montenegro. I am BJJ brown belt under Andre “Tim” Monteiro and 3rd dan black belt at judo and traditional ju jitsu . Besides being a coach, I am a specialist translator of English and French language, currently a freelancer. I train at my teams Mata Leao- ATM BJJ Podgorica and Stara Varos Judo & Ju jitsu club, which I founded with my brother Marko Jokmanovic who is also a brown belt.
My main titles as competitor and coach in all three of “my” martial arts would take a long time for me to write and a lot of your space, so I will try to be as concise as I can:
5th place World Grappling Championship 2011. -92 kg GI; 5th place World Grappling Championship 2011 GI absolute, silver medal Croatian BJJ Open, bronze medal Slovenia BJJ open, bronze Serbia Grappling open, bronze “BJJ- Ne waza” European challenge cup Romania, gold and silver Split international grappling cup etc.
I feel like I have a lot more to prove and show, I have put my competing on the side lately in order to form a good competition team and strong club, so my best results in BJJ and Grappling are yet to come. 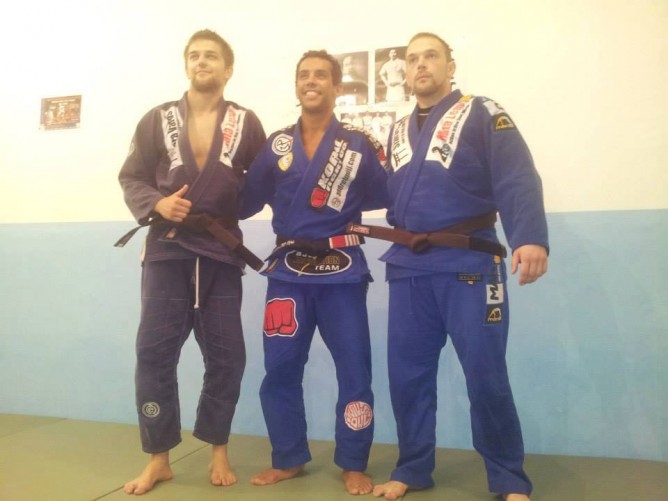 2. Please tell us about your background in Judo and traditional Ju Jitsu. How have they helped your BJJ?

Well I have been doing Judo for almost 15 years now, never quitting since I started, I have got my black belt in 2006 in Novi Sad, Serbia. I competed in judo with solid success, always ending up among the first three at the national competitions. I am also a referee in judo. When Judo rules changed recently, I stopped actively competing in judo since the change is too radical for me and does not suit my judo style and approach. In 2003, me and my brother started doing sport ju jitsu ( fighting system), just adding it up to our judo trainings and looking at it as “judo with strikes”. Me and my brother made a lot of significant results in Ju jitsu. This attracted us a lot since it gave us more competition experience and a sense of striking and distance because it looked more like a real fight than judo. That was around the time we became crazy about UFC, so it worked well for us. Our judo was very much ne-waza oriented and by watching Royce Gracie and recognizing all the moves we thought that was it. Along the way I competed in Sambo, took some medals too, until in 2005 when we felt BJJ in a sparring for the first time. We realized right away that it is the art we have to learn. I was astonished, I have found something that connected all those judo and ju jitsu moves and made an intelligent, vicious game out of it. That was something I felt was lacking from pure judo ground fighting. From that moment, up until today we never stopped training all three arts which I consider the basic foundation of success of our clubs and our style, that many people find a bit unorthodox in all three sports, because it is a blend.
People who cross- train understand what I am talking about. For me BJJ, Judo and traditional JJ are like triplets divided at birth. Many people do not realize that all these arts are just different directions, philosophies of the same essence, very similar and very different at the same time. I consider myself fortunate to be able to professionally connect them and differentiate them, since that is the way of understanding them. Some people make mistake in trying to confront these arts in term of which one is better, believe me, you cannot do that since it is like forcing two brothers fighting each other. Some may disagree but both judo and ju jitsu can make your BJJ better and vice versa. Everybody knows that Judo and BJJ work great together, even the ju jitsu fighting should not be underestimated by BJJ practitioner, but embraced as a new experience and test. The most difficult but the best thing to do, is to compete in all three as we do. We even occasionally participate at freestyle wrestling and sambo. That is the kind of competitor you will find in my club, that I am striving to create. That kind of fighter will have no problem adapting to MMA.

3. Please guide us through your Brazilian Jiu-Jitsu journey.

My BJJ journey still lasts and I hope it will last forever. It is tough but beautiful. There was no BJJ in Montenegro in 2006 and Montenegro just gained back its independence, so I decided to make a brave step as 18 year-old blue belt instructor, to open up a first Brazilian jiu jitsu club in Montenegro. The plan was to gather a group of people so we can practice the gentle art and it all started well. Apart from people telling me that I went crazy that BJJ does not exist, that it is a Japanese sport, that I do not know what I am doing, that I would lose my reputation etc I am glad that today some of those people even practice BJJ . First group was formed and practiced for about a year and then we lost our rented training place. That is when the troublesome period started; we used to gather at my house in the basement, in other gyms until 2009 when we got on our feet again. We met all kinds of people trough BJJ good and bad. I never thought that so many people would hate me so much for practicing, what was then, the new martial art. But today Mata leao is a serious, very ambitious and promising team and we have a very good professor and friend Andre Monteiro.

4. Please tell us about your academy and team, Mata Leao, in Montenegro

Today Mata Leao is the team that has two groups in Podgorica and one section in coastal city of Kotor. We are part of ATM BJJ family. We are definitely the most successful club in the country. Proudly, our club members won 5 grappling world medals so far, among which 3 gold, one silver and one bronze, both in GI and NO GI. Lately, we started visiting regional BJJ opens with more than fifteen competitors and I am very proud of that. At the last No Gi Europeans championship, our representative ended up in quarterfinals, we took one gold and two bronze medals at the IBJJF Rome Open. Croatia BJJ Open- 8 medals, Slovenia BJJ Open- 7 medals, 5 medals at Serbia BJJ Cup etc. We always tend on improving so we do our best to compete as much as we can and host and visit as much seminars as we can. We have a lot of promising fighters as Krivokapic, Rondovic, Mitrovic, Boskovic, Novakovic, Vuletic,Popovic, Celebic, Beloica and many others.
I would like to invite everyone from Montenegro and Podgorica who would like to be part of our team to come and train with us. Find us on FB, our web site or You Tube channel.

5. How is the BJJ scene in Montenegro?

BJJ scene is Montenegro is growing; the publicity of our most significant results made people hear about BJJ and its popularity is gradually getting bigger. We do our best to promote the sport. We even made it to the front page of the newspapers a couple of times which is something unusual for a so called “small sport” in Montenegro. Personally, I tried unifying Montenegrin BJJ scene some time ago by gathering representatives of the clubs and suggesting people to make a good thing for the sport but unfortunately it did not happen and there is no sign that it will. The most important thing is that BJJ exists and that people do it for love and for the sport. People should be glad somebody trains the same sport as them, instead of hating each other. So I think we should all do our best, to be our best and everything will be great. 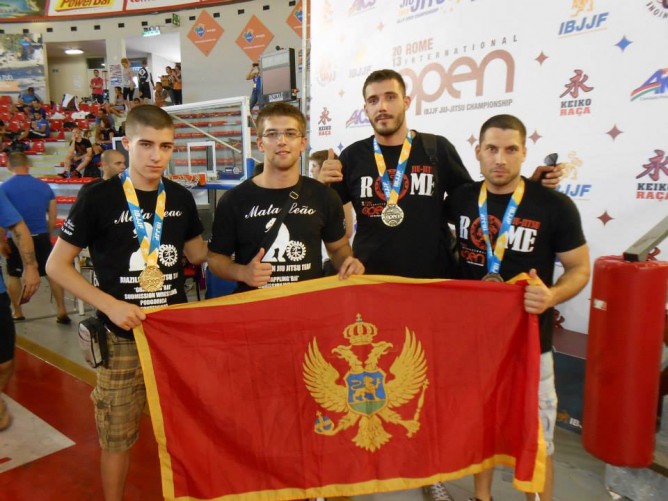 Mladen’s brother and students at the Rome Open 2013

2013/14 we will compete as much as circumstances allow us, and hopefully 2014 we will have a couple of representatives at the IBJJF Europeans and Worlds. We also plan to host a couple of seminars as we usually do. We will continue to train hard and represent our team, our city & country and of course ATM BJJ, the best way we can.

Well, unfortunately we do not have many sponsors at the moment to thank to, besides Sniper fightwear who sent us a gift sometime ago, but if someone is interested contact us, we will mention you next time
I would like to express our gratitude to professor Andre Monteiro-ATM BJJ; our friend and strength and conditioning consultant and fighter himself, Travis Conley of Underground gym; MMA legend Remco Pardoel, all our team members and friends who stuck with us in good and bad; Special thanks to Neno K, Goga B, Risto D, Daki K, Sasa K, Ivan K, Piotr D, Marijana B, Milos A, Danilo R, and many others;
and of course thanks to BJJEE and Guillaume for this interview. OSSSS

8. Thanks Mladen and all the best!

Thank you one more time, and keep up the good work.