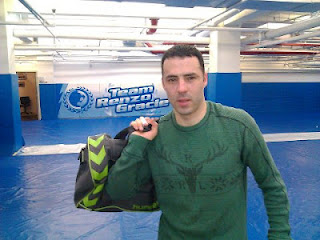 1. Boris Hi can you please introduce yourself to the BJJ community of Eastern Europe?


My name is Boris Zunjic, I’m from Montenegro and am 35 years old. I am a member of the club Equipe Fabricio. I train Jiu-Jitsu more than four and a half years. I have a purple belt. I am currently in New York and training at the Renzo Gracie academy.
So far my greatest achievement is the bronze medal at the New York Open 2012 organized by the IBJJF.

2. How did you start training BJJ?

At the suggestion of my friend Zvezdan Begic, who was one of the founders of the club Equipe Fabricio. Although I have previously coached boxing, after a few sessions I realized that bjj was the sport for me. I am at our club since its foundation and in the beginning we were only a few.  I had the privilege to be training the first l year one on one with our master of Jiu-Jitsu Edson Rodriguez Ricardo, II degree black belt, who is my coach and great friend .
I also had the opprtunity  to train almost 10 months in Zerjal club from Belgrade, with great coach Slobodan Davitkov (black belt).

3. Please tell us about how you ended up in the U.S. and how is training BJJ at Renzo’s?

This year I first competed at the European Open, where I reached the quarter finals. This was a good result since this was my first competition. I decided to go to America in the Renzo Gracie Academy (RGA) and to upgrade my skills and to participate in as many competitions organized by IBJJF. The Academy is located in the heart of Manhattan and has excellent conditions for training. That is to say it is one of the oldest schools in the East Coast and one of the best places in the WORLD to train bjj. No other school in the area has the same amount of black belts that train on a daily basis. Without exaggeration, I’ve been to classes with over 10 black belts in attendance and many browns and purples. In terms of different programs and you can train with Professors Daniel Gracie, Igor Gracie, Gregor Gracie, John Danaher, Jose Chierghini Zed P, Magno Gama, Leo Leite, Rafael Sapo Natal and Instructors Neiman Gracie and Raffa Costa. They are wery professional and there is great respect between coaches and students, the atmosphere is relaxed and very good for learning.
The school attracts a lot of professional talent that trains there on a regular or semi-regular basis. To drop a few names: George St-Pierre, Frankie Edgar, Romulo Barral, Braga Neto.. etc
What are the best for me, is when it comes to training with bjj people from all over the world and you always have the ability to train with new people, and also to try your techniques. Often the same people I met in the same competition.
Another good thing about the school is that it also has a very serious Muay Thai program. They of course train, and put out, many professional / amateur MMA fighters.

4 . Who were the best BJJ players that you trained with there? 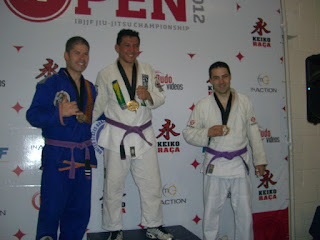 I would have to say Rafael Sapo Natal, Roger Gracie and Raffa Costa.

5. How are Renzo and John Dannagher? People say that Dannagher is a BJJ genius, what do you think about him?

Renzo himself is one of the most affable and charismatic people you’ll ever meet, this goes a long way in setting the vibe of the school. He is, of course, also a great teacher.
I trained with John Danaher. Many consider him to be a genius when it comes to Jiu Jitsu as well as one the best instructors. He is very articulate and certainly of a rigorous, intellectual mind, and has left an imprint on the sport in the many people he’s trained.

8. Please tell us about your school in Montenegro


My club under whose name participate in competitions, the club Equipe Fabricio-Montenegro.
Open the year 2008,  with coach Edson Rodriguez Ricardo master of Brazilian Jiu-Jitsu, second degree  black belt. He is a very good teacher who is aware of intricacies of the sport and knows how to properly articulate and convey their knowledge to students.
Club Equipe Fabricio is a member of the International Federation of Brazilian Jiu-Jitsu and member of the ADCC. What makes this club special is the incredible positive atmosphere, socializing between members of the club and a great enthusiasm for training. For a brief period of existence of the club, members have achieved good results in competitions and already in the shelves of our club can be found medals from local, regional and international competions. What I would like to see soon is a larger space, and even better conditions for training.

8. How is the level of BJJ in Montenegro?

This sport is relatively young in Montenegro, but I can say that for a brief period this sport has become popular in Montenegro. More and more clubs are opening, and more young people want to train, which all point to the bright future of this sport . Besides Equipe Fabricio Montenegro there are several clubs that do excellent work on the promotion of the sport. The last year, we very successfully organized two competitions in Montenegro. Open Luta Livre in Budva, and Open ADCC in Montenegro.
I must point out the obstacles that we encounter, that there is no greater understanding and support from the state and people in positions who make decisions about the importance of a particular sport. In such circumstances it is very hard to promote a particular sport and organize competitions. I hope that in the near future it will change and we will give the state to recognize the potential of this sport.

9. You’ve competed a lot recently in the biggest tournaments. What were the biggest ones and toughest ones in terms of level? What are your plans competion for the following months?

I took part in the Pan American in California. There were about 3000 competitors from all over the world. An incredible experience! Also it was the hardest because I had a tough match in the first round and lost to an incredibly ready fighter who is a former wrestler, and who eventually took the gold in the category of both categories. I would to meet him again.
As for the next competition, I am planning to appear at the Montreal Open, Open in Las Vegas. In October, the Pan American bjj no gi, and in November the World bjj no gi.

10. Thanks Boris and best of luck!