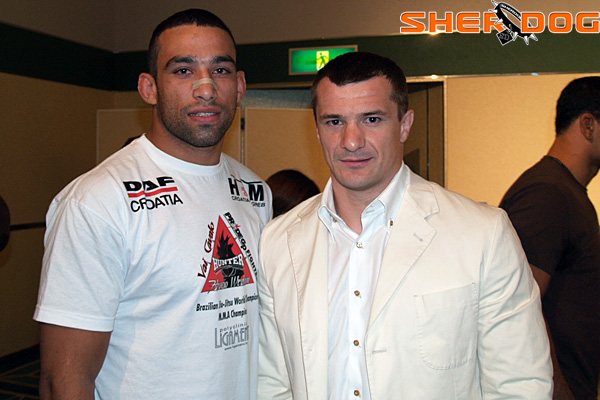 Mirko Cro Cop on Croatian TV talks about the time he choked out Fabricio Werdum.

Werdum lived with Cro Cop in Croatia for 2 1/2 years, from 2003 where he taught him Jiu-Jitsu and Cro Cop taught him the striking game.

In a recent interview with a TV channel in Croatia, Mirko told how, one day, after being submitted more than 600 times, he finally managed to catch his teacher.

“Every training Werdum destroyed me.  At first, if I could last 30 seconds, it was a victory. Sometimes, even that did not last. He is a master at what he does, is world champion of Jiu-Jitsu. Without exaggeration, he must have submitted me over 500 times. He told me that the day I would catch him, he would return to Brazil the same day. Until, at the end of one workout, he asked me to give him one last roll, ‘Come on, come on. Fruit, “in Portuguese, to encourage me. So I went to train. He attempted a leglock, I escaped and managed to get his back and finish him with the rear naked choke. I started to laugh and say: ‘knock, knock, knock’. But he went out. Five seconds later, he woke up and opened his eyes. And he went out and bought a ticket to Brazil, as he had promised. But none of that means anything. I submitted him once while he submitted me 600 times at least”

Check out the cool story: