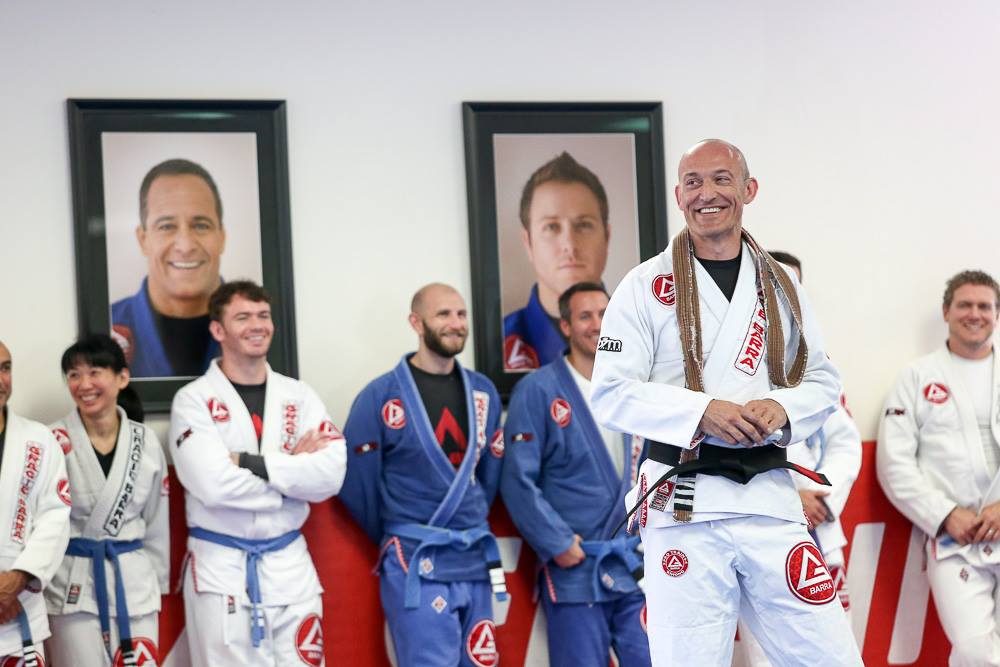 Englishman Robert Zeps is one of the most interesting people in Jiu-Jitsu. He is a BJJ black belt that came to America back in 1995 and started training jiu-jitsu just about 8 years ago. He started training with Nelson Monteiro in San Diego. As he was training with him, he reached out to the Gracie Academy in Torrance, started meeting a lot of fun people and talking a lot about jiu-jitsu. He sat down with Ralek Gracie a few times and discussed, “what is it that people really want to see in jiu-jitsu? Do we want to just go to high schools and watch some of the top professionals wander around looking for bottles of water, or do we want to do something that would treat these athletes like the stars that they are, and also treat the fans to something a little more exciting and interesting?” So he started Metamoris together with Ralek Gracie. Another one of his projects is Studio 540, which is a non affiliated jiu-jitsu school which last year hosted 22 free seminars between May and December to give an opportunity for many students to attend top class seminars that they otherwise might not be able to afford.

Robert spoke to BJJ Eastern Europe about Metamoris, the growth of Jiu-Jitsu and Studio 540:

1. You are heavily involved in the spread of Jiu-Jitsu worldwide, being one of the founders of Metamoris and the owner of studio 540. How do you see the worldwide BJJ scene at the moment and in the next 5,10, 15 years?

What is so exciting to me about BJJ today is its fast paced evolution. Incredibly talented athletes are constantly redefining the sport and at a very early age. Many adult blue belt matches can be indistinguishable from the back belts and some of the best practitioners are in their early 20’s doing things that they themselves have innovated.

However in my opinion there is a growing problem stifling the younger black belts. Many athletes remain competitive in the adult divisions well into their 30s and even early 40s (Cobrinha and Braulio for example). The IBJJF should seriously consider forcing everyone to participate in their own age divisions first, then have an open age division for the winners. They should also change the adult matches to 5 minutes and make the masters matches 8 minutes. The adults just stall with 10 minute matches and the masters don’t get going until after 5 mins!

In the next 5 years I think there will be a recognizable increase in cross training between wrestling, catch, judo and BJJ. This already gives the best of the best an edge in tournaments today. Jiu Jitsu may be a complete art for street self defense but when competing against other practitioners these skills need to be layered on top of jiu jitsu. Jake Shields at Metamoris 5 was a great example of how his wrestling on top of sold jiu jitsu knowledge enabled him to dominate someone as accomplished as Satoshi. The spirit and legacy of Rolls Gracie alive and well! 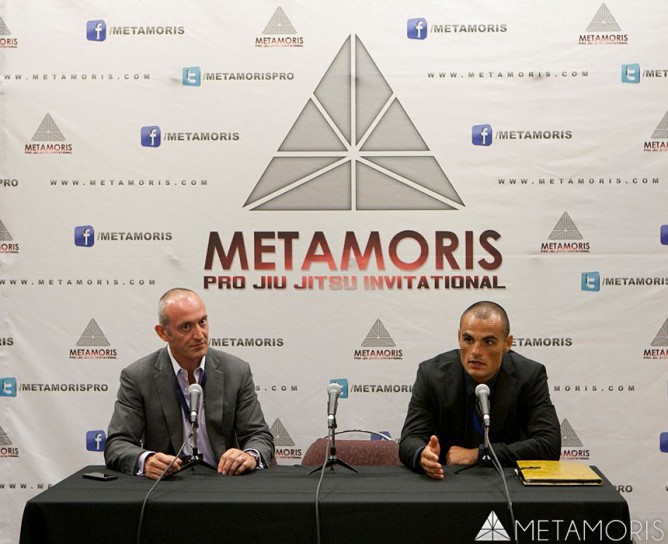 2. With UAEJJF pushing hard to finance worldwide BJJ tournaments, and the recent inclusion of BJJ in the 2018 Asian Games (2nd biggest multi-sport event after the Olympics), what is your opinion on BJJ one day possibly being in the Olympics?

Given that the IOC dropped wrestling for 2020 before reversing the decision after an outcry, it seems difficult to conclude that they would wish to add another form of grappling. Furthermore, if you take a look at the list of world champions for even the past 3 years there are few practitioners who are not from Brasil, so the chances of convincing the IOC that it is a globally competitive sport would be an uphill battle. However, given how easily corruptible the IOC has proven to be in the past, I’m sure if the UAE nations push hard enough anything is possible.
3. What are the short and long term goals of Metamoris?

The goal of Metamoris has always been to present jiu jitsu in its purest form in a format that can be exciting and financially sustainable. It is not obviously clear if these goals are mutually compatible. Ralek has done a great job of trying to put together matches that might have a larger reach than the core BJJ family by bringing in MMA stars. This has worked to a certain extent but it is hard to predict how a match up will go down. Barnett v Lister was exceptional but they haven’t all panned out this way. I think its fair to say that less than 1% of UFC fans actually practice MMA but probably more than 95% of Metamoris fans regularly practice BJJ. This is a very important distinction to understand when promoting the events and predicting interest that can convert to dollars. I don’t think we are there yet but it is improving. 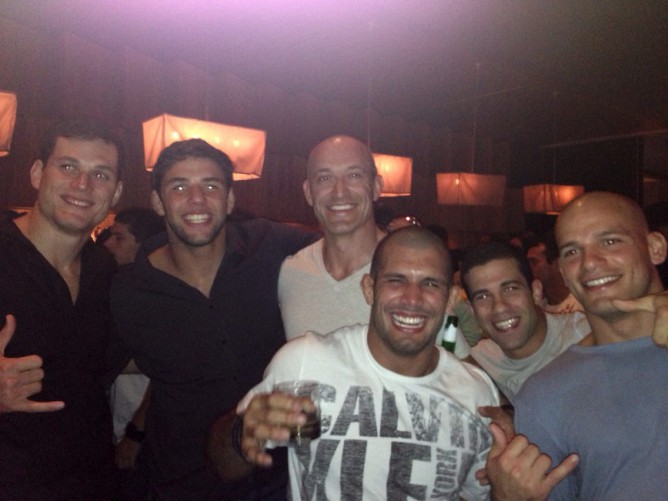 Robert Zeps with BJJ legends at the Metamoris after party

4. What do you think of the other sub only events that are similar to Metamoris?

It has been very helpful to see other tournaments play with the variables and experiment to see what can be the most exciting solution to keep people interested. There is a lot of talk about the differences between points jiu jitsu and submission only grappling, but as Caio Terra pointed out, its still the same people winning!

5. Can you tell us more about your academy Studio 540 and what makes it unique?

Studio 540 is a non affiliated jiu jitsu school in so far as we welcome people to come train from any schools around the world and are not controlled by an outside body. Our senior instructor is of course Fabio Santos but we have blackbelts teaching from a variety of top teams, as well as world class wrestling and judo. We hosted 22 free seminars between May and December last year to help promote the school but also to give an opportunity for many students to attend top class seminars that they otherwise might not be able to afford. Obviously this is not inexpensive but I have no regrets giving back to the sport that I enjoy so much. The highlight of this open environment was having Keenan Cornelius attend a Felipe Pena seminar where we got to watch them roll for the first time together. As two of the best heavy weights in the world this was quiet a treat.

I would also lay claim to the cleanest school in the industry! 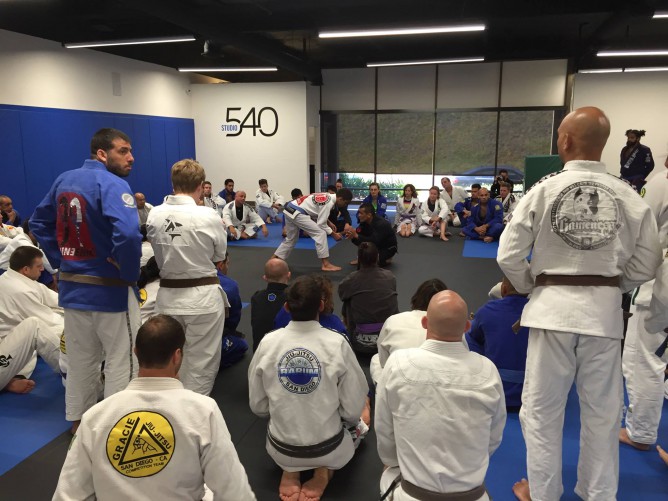 6. Who are some of the best grapplers that you have trained with?

Nelson Monteiro has been my main instructor from the start of my training and remains the toughest guy I get to roll with on a regular basis. I’ve been lucky enough to train with Xande, Roger, Braulio and Victor, Andre, Caio, Ryron and Rener, Cobrinha not to mention all of the guys who have been through our studio to give seminars during 2014, far too many to list. The joys of being taken apart by everyone of them in their own way continues to entertain and frustrate me. Just when I think I am improving, someone 25 kg lighter than me makes me feel like a white belt. I think this is what keeps BJJ distinct from other martial arts.

Professionally we will continue to evolve Studio 540 and host seminars throughout 2015. The biggest request I get on a constant basis is to have Marcelo Garcia come to Studio 540. Perhaps this will be the year!

Personally I look forward to Masters 4 division at Worlds this year.
8. If you want to thank somebody, feel free.

There are far too many people to thank without forgetting someone, so I will just thank my wife for being so unwaveringly supportive.