Marcelo Garcia’s Tips: How to Improve in BJJ, Gi vs No Gi & Conditioning 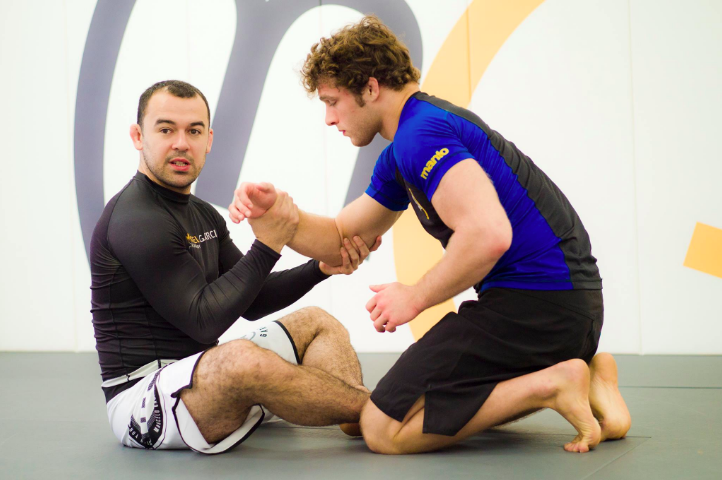 Great advice from World BJJ and ADCC champ Marcelo Garcia on the best way to improve in BJJ, Gi vs No Gi, conditioning etc…Transcribed by royalgrapplingacademy from a youtube interview by Matt Arroyo.

What year did you start training, and how old were you?

How many years did it take to get your Blackbelt?

There’s so many great grapplers out there but why are so good? What makes your game so good?

I don’t know how good I am, I don’t like to think about that. One thing I believe and I’m proud to say is I think I love JiuJitsu more than anyone else. I’m sure I stayed on the mats training more than a lot of people. I believe that helped me a lot over the years. I think it’s one of the secrets, you gotta enjoy what you do, if you don’t enjoy it you’re not gonna go too far.

What do you think is more important? Rolling time, drilling or both?

If I have to choose one, I would definitely say rolling, but it doesn’t help if you roll and you don’t know what you’re doing. You have to have a game in your mind you’re gonna work. It’s like you wake up and you have an idea, maybe you see a video online but then you have to go to the mats and if it’s new you have to drill it. Maybe your coach shows a new technique, of course you have to drill it first so you understand the technique and so your body gets familiar with the movements. What’s the minimum amount of time, per day or by class, you would roll to get good fast?

People need to understand that it’s not easy, there are so many people trying to do the same thing but you have to do more than these other people.
You have to be on the mats more than the other guys, and it’s so important to enjoy being on the mats. One year of my life I trained four times a day, I couldn’t do more than that one year. You should never be satisfied with how much you trained, in my mind I always thought I could have trained more!
Don’t ever think you’re good enough. If you do win the worlds at blue belt don’t think you’re the best, you need to feel like you should train more. That’s how you will improve. I guarantee if you push yourself to the maximum you will have chances to train more.
You have to try and enjoy all that if you don’t it’s gonna be a pain.

How do feel your game changes from gi to nogi? I noticed you don’t do guillotines in the gi and you don’t use many front collar chokes.

No, I don’t like to try guillotines in the gi because the percentage is very low, the collar gets in the way too much.
In my mind I try to do the same things for both. There are a few exceptions, like obviously I can’t pistol grip nogi, so I just adapt those grips and use wrist and elbow control. I’d advise guys to try notice the difference and adapt your game for both, I still believe there’s not a lot of difference.

It seems like when you compete you never get tired! How do you train your cardio for competition?

I just enjoy being on the mats! I try to do as much as I can when I train, I still try to get in the mats as much as I can. That definitely helps my cardio for JiuJitsu.
You know, sometimes you might be tired but you can’t let your opponent see that you’re getting tired. In training it’s fine, but not in competition. I get tired for sure but I need to believe my opponent is even more tired, if you’re looking like you’re not tired that gives you an edge. Remember, if you push 100%, your opponent has to defend 100%.
One time in a nogi superfight I was having a hard time getting anything and I saw my opponent start to breath heavy. Up to then I was pushing hard but when I saw he was getting tired I pushed even more and then I got something. Before that point I couldn’t get anything but after I kept advancing and eventually finished him.

So, you don’t supplement your JiuJitsu with weight training?

I tried before for 8 months. They pushed me so hard and I never enjoyed it one bit. I don’t feel like it helped my JiuJitsu even one inch! I was always so much more happy when I was just training JiuJitsu. I always felt that the training I did on the mats was so much more important.
Even now all I do is train on the mats. I think it’s been four years since I even jogged outside. I prefer to spend all my energy and sweat on the mats.
For some people that can’t train on the mats so much, I’m sure that training can help. If you don’t have the chance to get yourself exhausted training JiuJitsu maybe you need something else.