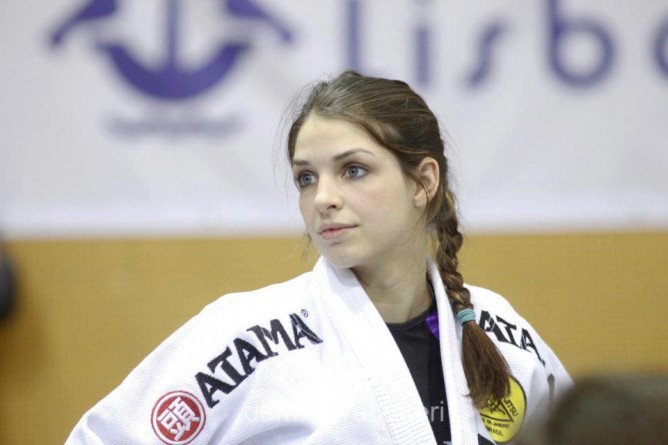 Weight and absolute world champion in all belts befor black belt, the Brazilian-American Mackenzie Dern won her first major title in the black belt, at the European Championships this year. The next step for her is the Pans which happen in March in California, this competition that will make history by being the first IBJJF tournament with doping tests.

Check out the full interview with the fighter (translated from Portuguese from tatame.com.br) , who ensured not be worried about what PED her opponents may be taking and promised to do everything to win another title.

How was your first major tournament in the black belt?

I felt great. I’m in a phase with very good mental state and this is helping me a lot. The European championship is always a strong challenge and I participated in the last four, so I was happy to finally fight the first tournament of the year in IBJJF black belt. In my bracket in the featherweight, and I only had two more girls, who were Nyjah Easton (Lloyd Irvin) and Michelle Nicollini (Checkmate). It was one of three brackets. I won against Nyjah 15 × 2 and finished with a choke in the back.

Did you feel frustrated at not being able to fight Nicollini and test yourself with one of the best black belts of today?

A little, but we will still face many times. But I was frustrated by not having a final. Would be my first final in the black belt. In the end I came first, but Michele and I could have shown a good fight for the public. But no pressure, I wish her a good recovery and know that soon she will be in competition. 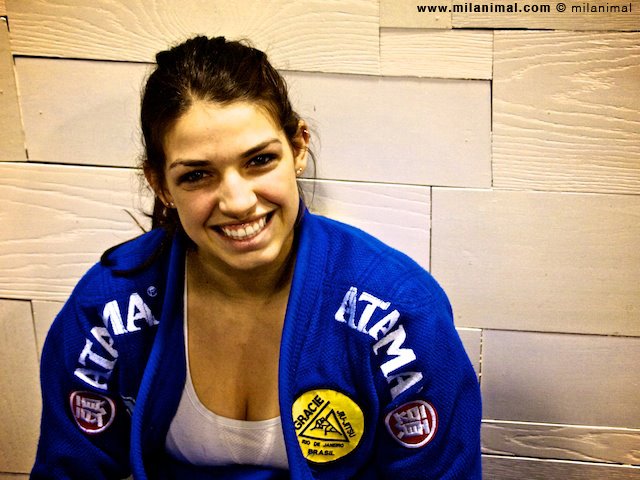 What do you think of the closing of categories that keeps happening?

It was ugly for the championship to not have finals at weight and absolute. In the men’s final some athletes closed, and opted not to fight. The European Championship is a great and I think the finals should happen.

With respect to absolute, you have always been very strong, how do you evaluate your early elimination in the black belt? What was it like to taste defeat?

Since I was a blue belt, the absolute was always just for fun. If I win, it will be a great thing, but if you lose, it will not be the end of the world. My concentration is on my weight class. It is always difficult to win the absolute, so do not expect anything different in the black belt. I faced Polyana Lago, who is very tough and is fighting for a long time. It was a great pleasure to fight with her. I lost 3 × 0, which was not bad, since Polyana was heavier. My fight was 10 whole minutes and ended up falling in 50/50, which was not a good position against a heavier girl (laughs). How to take defeat?  Every fight you will gain a new experience, regardless of the outcome.
What did you think of the decision to put the CBJJ doping test at the Pan? What will change?

For me it will not make a difference, the ‘bomba’ does not work miracles. There is no use taking steroids and not training, you will not win. I’m not saying it’s right or who takes steroids I agree, but I think everyone should think of himself instead of thinking about what your opponent is taking. The winners make an effort to reach the top of the podium. The doping will not change anything. Who takes will do like many athletes from other sports, they will find a way to hide the doping. I’ll never use the excuse that I lost because the other person is taking steroids. You’re still going to have people complaining in the championships, but just train and think about yourself, because while you’re thinking about what your opponent is taking, training or working out, he’s focused to fight anyone. The good thing about this decision is that I think will make the sport more professional and less amateur, like Judo and Olympic sports, and that’s what we need to continue to evolve our sport.

How is the expectation of being able to be champion of the third competition of the year in the black in the Pan?

My expectation is the best. I hope everything works out. God willing, the wins will come. I am hoping that I will win it all, especially in my first year of black belt. It is difficult, but I’m training and I will try to do it