Kron Gracie: “Sport Jiu-Jitsu is on the decline, it’s getting worse. With Metamoris, I want people to see the real Jiu-Jitsu.” 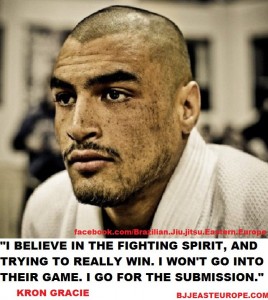 Kron Gracie had some harsh words for Sport Jiu-Jitsu in a recent interview with Graciemag. He will be facing Otavio Sousa in a superfight at Metamoris on October 14th and plans to show the world the essence of Jiu-Jitsu: The search for submission in a no point and longer time format..

Kron, have you changed the way you train at all because of the rules?

KRON GRACIE: Not at all. I’m training the same as I always do. I’m training hard with my team here at the academy. Everything’s perfect. I fight targeting the finish, without thinking about points or time, so nothing has changed. I’m just training really hard because it’ll be a tough match. I’m rotating through the students on the team. There’s Patrick, who just got his black belt not long ago, and other really tough students who are helping me out too.

What guidance has your father, Rickson, offered you about the new rules?

He’s made some special recommendations, but I can’t reveal them to you, can I (laughs)? He’ll be there in my corner on the 14th. Truth is, I always have my dad helping me, whether at the academy or over the phone when he’s in Brazil or traveling.

What are your thoughts on this no-points format?

To me it’s like a dream. I’m anxious to see how things flow. I think I’ll be a lot more at ease, since I’ll have time to work. I’m certainly a bit happier that we’ll have a bit more time to see who’s the better fighter.

Are the rules good for the sport and Jiu-Jitsu fans?

I think we’ll find that out after the event. As André Galvão told you, what’s important is that the fighters don’t go in there just trying for the draw. The rules are perfect for you to go on the attack and win the fight. That’s what’s important—wanting to win the fight. If the athletes are going for victory, and not just aiming to tie or not lose, the event will be really cool. Otherwise, it could be a boring 20 minutes.

What do you think of Otavio Sousa as an opponent?

Otavio is the current world middleweight champion and I think he’s really tough. He gave me a chance to face him, so I’m honored to fight the champion. Let’s see who wins.

Kron Gracie and Otavio Sousa from the 2007 Pan Ams. This is the first time they would meet while at Brown Belt. They went on to meet one other time at the Worlds the same year.

What’s your angle on the current Jiu-Jitsu-tournament panorama?

In my opinion, it’s on the decline. I feel Jiu-Jitsu is getting worse. These days we see blue and purple belts who think Jiu-Jitsu’s all about grabbing the sleeve and trying those little sweeps… I feel they lose time with all that and the sport is getting worse with that kind of game. But no one can control that—not me; I can only do my best to see that Jiu-Jitsu keeps moving forward, upward. I feel beginners these days need to get inspired by Jiu-Jitsu as a whole, not just sport Jiu-Jitsu. I want to do this match at Metamoris so fans can see the real Jiu-Jitsu.

How do you see the future of competition Jiu-Jitsu?

In the future, I hope there’ll be more events like Metamoris, events that can make the fighters comfortable to express themselves and that are more interesting for the crowd to watch. I feel that that’s how Jiu-Jitsu will make it to TV and to an Olympic level. That’s the path, and not through the stalled matches we’re seeing these days. I feel there should be more rules against stalling in Jiu-Jitsu. Look at judo—you can’t stop, can’t do certain things.”