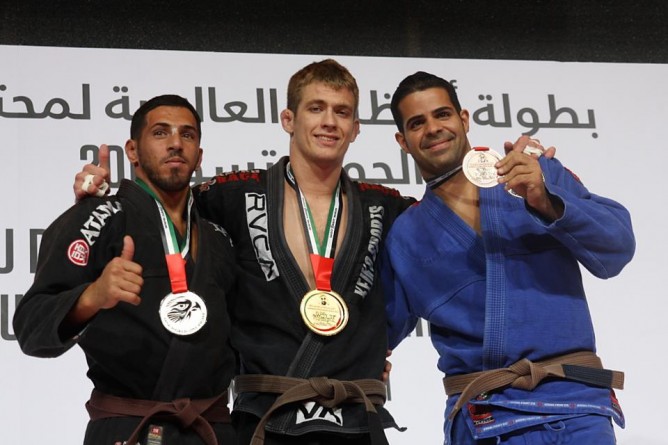 Keenan Cornelius recently did a in depth interview with Stephen Kesting of Grapple arts. This is what he had to say about his strength training, and the differences in training styles between Team lloyd Irvin and Atos (where he trains at now):

Keenan on strength and conditioning for Jiu-Jitsu:

“Just to clarify: I do strength training mostly. I’ve done some crossfit type training and I’ve done some explosive style training but I feel that there isn’t it a lot of explosion of Jiu-Jitsu unless you’re standing. So I feel that just basic, meat head type lifting is actually really good for Jiu-Jitsu, so I try to stick to that. I’ve had a lot of success with that. ”

Stephan: The elephant in the room, when we’re talking about Team Lloyd Irvin, is why did you leave?

Keenan: Well personally Lloyd Irvin never did me wrong. He never screwed me over in any way. He really facilitated my dream which is to train full time. Obviously the unsavory stuff then came to light that none of us had really known about. It’s pretty obvious why we all left, though DJ is still over there which we found out was for another obvious reason…

Keenan: Yeah. It’s a little different. In Maryland, we were trained with two really hard training sessions per day with one smaller, lighter drilling-only session in the middle of the day. So it’d be like 11:00 a.m. to 1:00 p.m. or 2:00 p.m. and then we come back at 8:30 p.m. and then train to 10:30 p.m. or 11:00 p.m. or 11:30 p.m. depending on the night. So we have a lot of time in between to rest – between those two big training sessions – where at Atos it’s a little more packed together. It is three training sessions in a span of six hours so there’s not a whole lot of rest time and it kind of wears down your body. Well, I guess I’m just not used to that different style yet but it’s different but it’s not bad – it’s just a different way of doing it. Obviously, it works when you have guys like Andre Galvao coming out of there and the other killers from the Atos gym like Michael Liera and Mike Carbullido and those guys – so I’m looking forward to it; I’m just keeping an open mind.

And I really enjoy the different type of instruction as well because Andre Galvao is on the mats everyday, training full time just like the rest of his competition team. He’s there; when we all have to be there at 9:00 in the morning to do the first training session, he’s there with us warming up. That’s a really powerful thing to have someone so high level on the mats with you all the time to beat you up and expose the flaws in your game…”