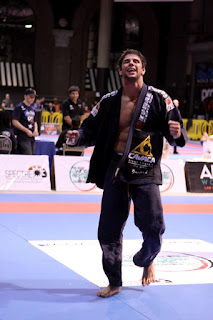 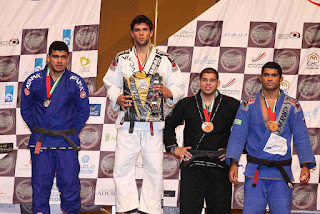 Marcus Almeida “Buchecha” is a Brazilian Jiu Jitsu black belt under Rodrigo Cavaca with an impressive resume. Before completing his twentieth birthday he was already being pointed out as the “next big thing” in BJJ, a claim he has confirmed with successive podium achievements in the black belt divisions. “Buchecha” means cheek (face). Marcus’s instructor, Cavaca, nicknamed him that because when he first started training he was a bit overweight and his cheeks were prominent. Marcus Almeida was born on the 8th of January, 1990, in a town called Sao Vicente close to Santos in the state of Sao Paulo. As a child Marcus wanted to be a football (soccer) player, but he was not very good at it by his own admission. He then turned his sights on Surfing a sport he practiced from a young age.
Brazilian Jiu Jitsu only came into “Buchecha’s” life in his mid teens. He was 14 years old when his sister first started training BJJ. Marcus’s father, Mr Cleiton Almeida, was very protective of his daughter, and started accompanying her to class. With time Mr Cleiton started practicing himself, and from there it wasn’t long until he was dragging his son Marcus with him. Luckily young Marcus loved Jiu Jitsu from the start and started training every chance he could.
Marcus’s physical abilities helped by the masterful eye of his instructor, BJJ World Champion Rodrigo Cavaca, soon turned Buchecha into one of the most feared athletes in the lower belt divisions, and after successive wins in the “Brasileiro”, Pan American, Sao Paulo Cup, Scandinavian Open and “Mundial”, Almeida received his black belt (while on the podium after his win at the World Championship in 2010), not long after his father was also awarded his black belt in BJJ. He moved to the United States with his master and his team mate Thiago “Baiano” Aragao in 2010 where he confirmed he belonged in the major league of Brazilian Jiu Jitsu, winning the World Nogi Tournament later that year, closing the bracket with his “Avengers” team mate, Roberto “Cyborg” Abreu He is currently continuing his dedication to BJJ.
On the eve of the Pan Ams and World PRO, Marcus Buchecha vowed to fight a attacking game. He fulfilled what was spoken. The Checkmat black belt  faced Alexander Trans in the final of his division and beat him with a sweep (2-0), granting him the highest place on the podium. In the World Pro he again took first place submitting Braga Neto with a foot lock from the 50/50 in a little over a minute. In this interview, the Brazilian spoke about the fights, and had harsh world about the organization of the Abu Dhabi World Pro. Check out the interview below:
What did you think of the final against Alexander Trans in the Pan Ams?
He is a tough guy. He’s part of our team too, but since we do not train together, we eventually decided to fight. I knew his game, which is very similar to mine: half-guard and attack on foot. I was expecting some of his moves, so then I was comfortable in those positions. I saw that he was a bit hesitant to pass. He was in doubt as if he was blocking. I was just resting and getting time. That’s where I got the sweep and then landed on top.
Cavaca said that you used the ‘his position’ …
They shouted “Use the Cavaca.” I looked at him and he told me to try it.
What is the position?
That traditional Cavaca: mastering the knee and arm, and unbalancing with the leg. Cavaca always taught us. As I have strong hips, it’s working well. It worked. So he is trying to copyright that move.
So you give merit to the master?
It is the master’s position.
Will you be in Abu Dhabi and the Worlds? (Interview was conducted beginning of April)
Abu Dhabi, as an organization, is awful. I think that magazines do not even know about it. For the States, each player will have to travel to New York from their own pocket. In Brazil, who won in Natal for example, has to travel to São Paulo, from their own pocket. They will only pay for flight from Sao Paulo to Abu Dhabi. I do not know whose fault it is. Is it the fault ofb the trials or the organizers? They bought me a ticket from Guarulhos, and I live in the United States. There is a $ 1000 ticket to Brazil, so that’s why I think it’s disappointing. Anyone who has wanted to place here the right to speak, but nobody has. So I think the event will disappoint. It has nothing to do with the trials, which were good, but with the organizers of the event
This means that you are concentrating on the Worlds?
That’s the way, right? Everybody wanted to go to the World Pro just for the money … It almost ruined my week, I barely fought in the Pan-Ams. I will focus on the Worlds. Our training camp is strong.
Do you want to send a message?
I want to thank everyone: Cavaca, Lucas Leites, who is a brother here, is helping me a lot. Joao Assis, Marco Sharpei, Lapela, Yuri, Cara do Sapato, Roger, Bahia … We’re a strong team here in the United States. We have no complaints.
Marcelo Garcia is a 9-time World Champion and known for getting to the back and finishing with the rear naked choke, even against much bigger opponents. This four-part system covers taking the back, jumping back takes, maintaining back control, and finishing from the back. Learn Marcelo Gracia's famous Back Attack System. USE PROMO CODE "BJJEE TO GET 10% OFF.