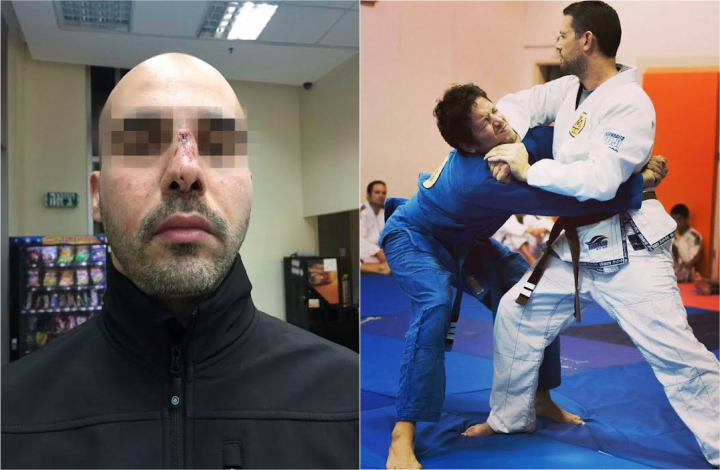 Imagine yourself walking in a dark place in the middle of the night when all of a sudden, a dark figure wearing a black ski mask, throws acid in your face and breaks your nose with brass knuckles… Unprovoked and out of nowhere. What would you do?

For U. (who prefers to remain anonymous due to the fact that the case is still under investigation), a Gracie Humaita Israel white belt under Itay Leibovich, the response was automatic. Close the distance, take the attacker to the ground, gain the top position, neutralize the danger and wait for the police to arrive.

Q: What went through your mind the second it happened?

A: I was caught completely off guard. I was just walking and minding my own business when this guy showed up in front of me. It was dark and he wore black clothes so I didn’t notice him getting so near. As soon as I spotted him in front of me I was hit with what was later identified as chlorine acid. It burned. Before I was able to gather my wits and response I was hit with brass knuckles which sent blood pouring from my nose.
Still disoriented, I quickly realized that to ‘stand and bang’ would not be the best of choices since I was already hurt, he was armed and I could not gather who was more physically able. More than that, he was standing very high and I figured he would expect a takedown .I closed the distances and immediately took him down. Once we hit the ground I slid to the mounted position and while fighting for control he was still able to hit me to the side of the head with the brass knuckles. I used my shin to hold down and control his arm and demanded that he stop fighting me. Although he resisted and tried to tip me over, my mount was solid and I was able to execute a guillotine choke and I called the police and remained in the position until they arrived to take him in. 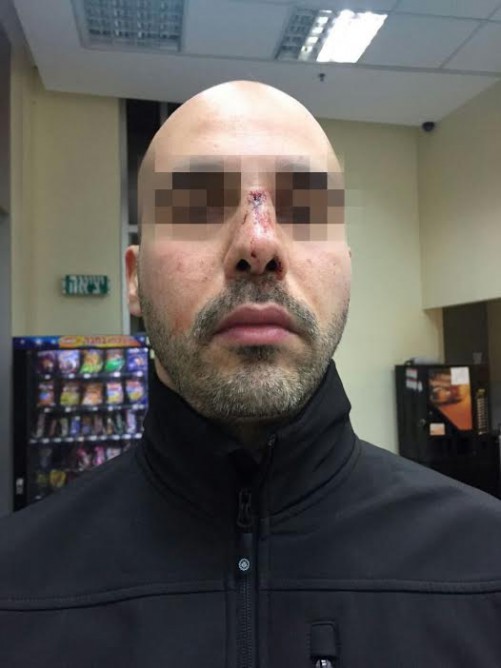 Q: what went through your mind during the altercation?

A: At first I was disoriented. The attack came out of nowhere, I had no quarrels with anybody and I was never in my life involved in any physical altercation. The funny thing is my mind worked in two different ways at the same time. On one hand I acted on autopilot. I did not think but acted. On the other hand, I was fully aware of every move I made, what was the aim of what I did and what the effect will be. The funny thing is that while I mounted him, still a bit disoriented and bloody, I felt calm. In fact, it was the calmest I have ever been.

Q: How do you explain this?

A: Well… After sparring with bigger, stronger and heavier partners, from blue to black belt, I am not intimidated by power and aggression. The feeling of a 95kg brown belt holding me in side control and trying to rip my arms off, makes the untrained attacker feel like an 8 year old.

Q: Did you act according to what you do in class? Or was it pure instinct?

A: We work on self-defense techniques and scenarios all the time. For us in Gracie Humaita Israel in general and in Team Leibovich, self-defense is the most important aspect of Jiu Jitsu. We spare every class for 30-60 minutes but we always work on our self-defence. 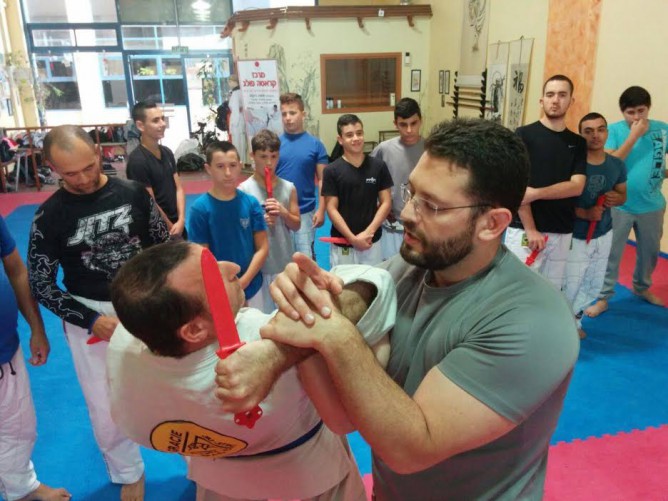 U’s teacher, Itay Leibovich is a brown belt under Moshe Kaitz. He is a multiple time Israeli national champion and an MMA fighter.

Itay Leibovich: sport Jiu Jitsu and MMA are very popular these days and any exposure to our art is a welcomed one. We in Gracie Humaita Israel compete regularly with great success however… Gracie Jiu Jitsu Self Defense is our bread and butter. While I feel proud when a representative of ours wins a medal, it’s these real life situations that makes me feel accomplished and proud of my students. I wish for all my students to never have the need to use the tools we teach and win medals if that is what they want… but they have to be prepared for the worst. Under the tutelage of Professor Moshe Kaitz and the supervision of Master Royler Gracie, we hope to preserve the essence of Gracie Jiu Jitsu.