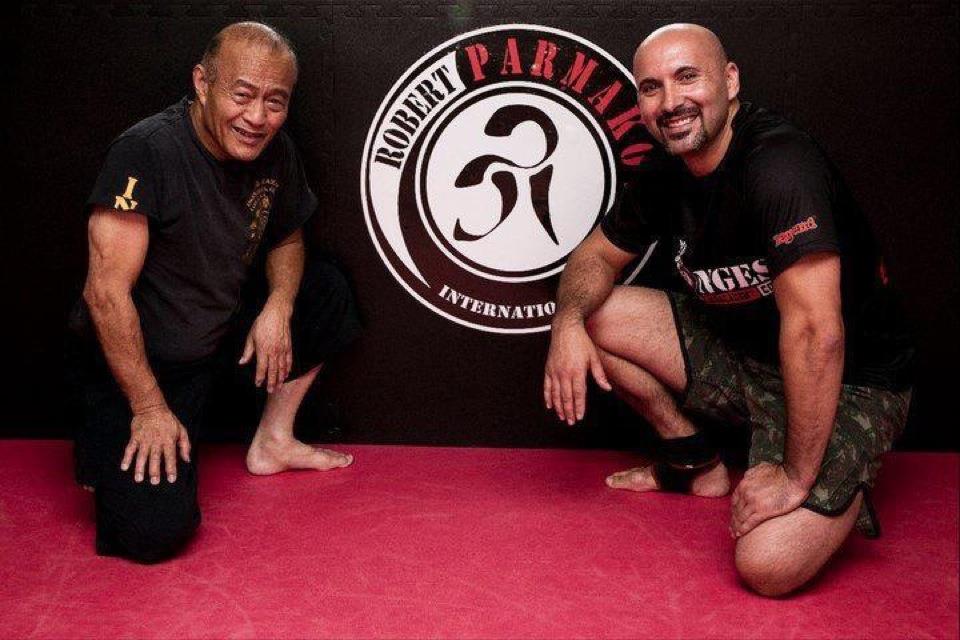 Robert Parmakovski is a world class Jeet Kune Do instructor and purple belt under Roy Harris. He has academies in France, Sydney and Melbourne.For more info on Mr Parmakovski’s Bio click here. He  introduced Macedonia to the fundamentals in Jkd, Kali, MMA and Bjj in 2005. As for his Bjj journey he began his training in Gracie jiujitsu in 1999, Machado jiujitsu 2002 and settled with Professor Roy Harris in 2004. He is currently an accredited instructor in Bruce Lee’s Jeet Kune Do, Filipino Martial Arts, Grappling and a Purple belt in BJJ under Sifu, Guru, Professor Roy Harris. In this Interview with BJJ Eastern Europe, he discusses BJJ’s limitations as Self Defense Art and how other martial arts can help fill in the gaps:

1.You actively train BJJ and Jeet Kune Do. Can you please tell us more about JKD and how would it compliment BJJ?

Jeet Kune Do is more of a training method than it is a style. This training method makes the effort to train its practitioners in all ranges of fighting: Long range, middle range, close-quarter, the ground and functional weaponry. Whereas the style of BJJ focuses its training exclusively on the ground. Jeet Kune Do training can help fill in the gaps that exist in the style of BJJ. Now, some might argue that BJJ has techniques for training long range, middle range, close-quarter and functional weaponry. And while this statement is true, it hides another (very important) truth, What is that truth? Here it is plain and simple:
That’s all it has! In other words, BJJ does not teach a variety of kicking, punching, knife fighting or environmental training methods. All it has are a few simple techniques (here and there) that are taught as “self-defense” techniques.
So, Jeet Kune Do training can help BJJ practitioners fill in the gaps.

2.Why don’t we see more JKD fighters succeed in MMA?

From my perspective, style and unique training methods have gone by the wayside in MMA. The key components in today’s world of MMA are athleticism and heart. Everybody who trains for MMA knows – and trains – the core arts: Muay Thai (for kicking), Western Boxing (for punching), Greco or Freestyle (for clinch work) and Jiu Jitsu (for the ground). Yes, some might include Sambo, Judo or Karate into this mix, but basically MMA encompasses two handfuls of styles. It has been this way for over a decade. So, I don’t think JKD practitioners have an advantage any more – because everyone in the sport is training in multiple ranges. And, everyone sees the importance of being highly conditioned!

I think any style of martial art when pitted against an untrained person can be a good system to study and train. So, I believe the art of Jiu Jitsu can be used effectively against low skilled or no skilled assailants – especially if they are intoxicated. However, once we find out that the assailant has some martial arts training, or has marked athletic abilities, this will show itself in the encounter. This will also show the limitations of Jiu Jitsu. While numerous BJJ students have used their Jiu Jitsu successfully to defend themselves, there have also been numerous BJJ students who have had their butts handed to them because their training was limited to BJJ. For example, a guy I trained with for several years felt that Jiu Jitsu was the ultimate self-defense system. We talked about this at length. No matter what I said, he was sure that Jiu Jitsu had all of the answers. Well, a few years down the road, he was involved in an incident that changed his perspective. Here’s what happened:
While walking down a street with his wife and young infant, a group of teenage skateboarders were skating nearby. One of them was performing some trick and he fell off of his skateboard. The skateboard flew out from underneath him and came crashing into the shin of my friend’s leg – causing the edge of the skateboard to slightly tear the skin of the wife’s right shin. She grimaced in pain and tried to stop her leg from bleeding – while holding onto their 18 months old child.

The skateboarder walked up to the woman, grabbed his skateboard and was about to walk off when my friend made a statement. He told the skateboarder to watch where he was doing his tricks! The skateboarder picked up the skateboard like a baseball bat, walked over to my friend and said, “And what are you going to do about it?” At that point in time, the other four skateboarders came over to where my friend was standing and surrounded he and his wife. My friend stood there thinking, “I could take this guy to the ground and choke him out, but then what might happen to my wife and child.” So, he decided to back off and let the skateboarder win the verbal exchange.
After that incident, my friend was now convinced that BJJ had some holes in it – in the sport as well as within the self-defense system. He began training with me in JKD.
If you take a look at the old Gracie Jiu Jitsu in action footage, you can see that it was not designed for a multiple assailant environment. So, while I believe BJJ is a phenomenal sport / art, the training methods it employs are very limited. This is where JKD training can help to fill in some of the gaps.

4. How do you see BJJ Progressing in Macedonia?

BJJ has progressed very well in Macedonia since 2005. I set the fundamentals and then sent a friend of mine to continue with the journey in 2011 seeing I was busy with other projects. It’s established they compete have a strong following and will get bigger as years go by. I started the Macedonian project in 2005 with 15 students I travelled every year to update the whole team in Jkd, Kali, Mma and Bjj , it has grown to over 300 people. I don’t receive any funds it’s non profitable, it’s for the love of Macedonia.