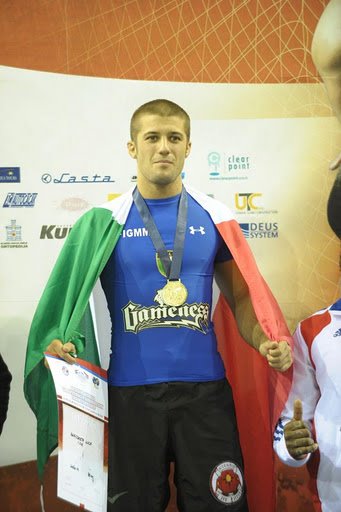 1.Hi Luca, can you please introduce yourself to the BJJ community of Eastern Europe?

Hi everybody, I am Luca Anacoreta, I come from Rome, I am 23, I live in Rome, I am a brown belt (master Rogerio Olegario), I train at Aeterna Jiu Jitsu academy in Rome.

In 2006 my brother Fabio went to Brazil for an holiday trip. He trained for the first time in BJJ at Nova Uniao (Natal) and remained impressed by. Once back in Italy he soon looked for a BJJ academy in Rome finding out one about 40 minutes from home. So my brother and I started to train BJJ with black belt III dan Master Rogerio Olegario.
During the first year we trained no gi. Lots of time I was going to leave the course because of the difficulties due to my light weight and youngness (I was only 17, the younger and the lighter in the group) but my brother did not let me give up. I continued to train and fight hard and the first results arrived. I won my first Italian Championship “Submission Wrestling class B”, 68 kg.
After a no gi year and half I started to train also with gi. The first defeats (with gi) led me to take this sport seriously once and for all: I was finally aware that I would have to sacrifice many things to win. I started to attend all competitions in Italy, obtaining good results.
But something was still missing to my Jiu Jitsu.
Meanwhile, I created my own BJJ group with other two friends, Paolo & Mirko (later it would become the Aeterna Jiu Jitsu academy). Then, through the group we managed to invite great champions in Rome for some training days, such as Rafael Mendes, Andrè Galvao, in order to learn as much as possible from them. Afterwards, I began to compete abroad to confront many different players, making new experiences, gaining some medals. But I think the turning point of my BJJ experience was in 2010, when Fernando Tererè stayed in Rome training with us every day for a month. After that experience I began to win and get up to podium in the most important worldwide competitions.

3.Please tell us about BJJ in Italy). How do you view the BJJ community in Italy and where do you see its level compared to the rest of Europe? Which European countries produce the best BJJ at the moment in your opinion?

As I remember, Roberto Almeida Meneguetti brought the BJJ in Italy. Then, Federico Tisi, Rogerio Olegario , Bernardo Serrini and Andrea Baggio disclosed it very much. Nowadays there are 30 black belts in Italy. BJJ in Italy is spreading a lot; there are many gi and no gi competitions, in addition the technical level is improving, as for me not enough yet in order to be competitive with some specific countries. I think, as far, northen coutries (Scandinavian countries, United Kindom, Poland) produce the best BJJ in Europe.
4. What can you tell us about you academy Aeterna Jiu-Jitsu that you run with your brother and about your most successful students? What do you offer students that other academies don’t?

To be precise, the Aeterna Jiu Jitsu is run by four brown belt players/friends, me, my brother, Mirko and Paolo and it is headed from the black belt Rogerio Olegario. It was born in April 2011 and currently it has 3 locations in Rome for a total of about 100 people. We have several International-level competitive players, as for example, the purple belt Ivan Tomassetti, 2nd place world championship and formerly world champion blu belt and FILA Grappling Gi world champion in 2011; and many others good players as Remo Zarroli, Mirko Silvestri, Alessandro Frezza, and Giulia Roggio among girls. The just mentioned players are all part of the Grappling and BJJ Italian national team.
I do not know if we can offer something more, because I believe that each one always try to do the best for his own academy. So I also try to give my best both from a technical and emotional point of view.
With the other high-graduated belts everyday try to convey the most out of all our both competitive and training experience, in order to improve the team performances, discipline, and motivation. So far we are really pleased with our method.

5.What are other BJJ players that you admire, and why?

The player I admire more most is Fernando Augusto “Tererè”. I had the pleasure of meeting him in person when he was our guest invited in Rome, for about a month. In addition to being a great champion, he is also an excellent teacher; he has given me a lot and he revolutionized my way of fighting. Lastly, he is a man of deep humility.
Another BJJ player who inspired me and I greatly admire is Andrè Galvao.

6. You have traveled all over the world competing at the biggest events like the Worlds, Fila Worlds, Scandinavian, European etc. Which title are you the most proud of, and what were your most memorable fights?

The title I am the most proud of is the silver medal at the world IBJJF in 2011, where I fought seven matches, a harder one than the other!
The matches I remember most are the quarters at the World Championship 2011 when I was losing 2 to 0 fighting with a very good player but finally I finalized him with a special choke, and the final match at European IBJJF 2012, when I won with a triangle choke.

7. How do you balance your competition career and teaching? 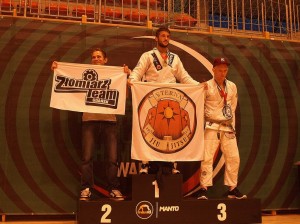 Luckily, my passion for BJJ is also my job, at the same time. Therefore, I spend every day in the gymnasium and that allow me to pursue courses and private lessons and use the remaining time for my preparation.

8. What type of strength and conditioning program do you do?

As for the strength, a very prepared personal trainer periodically realizes workout sheets for me; whilst for conditioning program, I do a lot of running and functional training with the rest of the team.

9. Whoa are the toughest European competitors that you have faced? 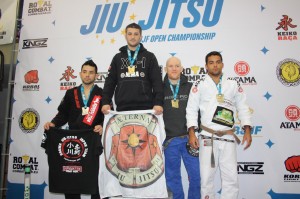 Next year I am going to invite some other great champion players to teach at Aeterna academy, to enrich my technical background and that of my students.
I am going to go back to Los Angeles to compete in the world IBJJ 2013.

11.If you want to thank somebody please feel free

Thanks a lot to you for the opportunity of this interview.

12. Thanks alot Luka and all the best!