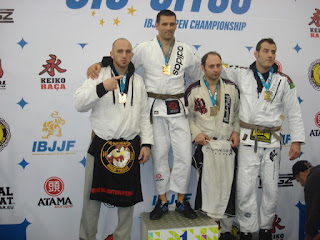 1. Hi Vedran can you introduce yourself to the BJJ community of Eastern Europe?

2. Please guide us through your journey in martial arts from when you started to now.

I always liked martial arts among others sport. When I 8 yrs old I started with karate, then during teen period of my life trained also little bit of Thai box, TKD `because I liked punching and kicking due my physique. During my high school and college education at the police academy we did a lot of selfdefence moves and that kind of martial arts. In 1996 my academy co-founder and my life partner in Jiu Jitsu Damir Salina gave me video tape of a early UFC, I think it was the recorded tape of first 3 tournaments. At that time Royce Gracie was unbeatable and then for the first time I heard of JiuJitsu.
I watched that tape manny times and after every time I saw something new in Royce Gracie’s game why he did some moves and tricked his oponent. I fell in love with the sport and the GI game. After that myself and Damir trained every day ground fighting, made up some moves and positions on our own, discussing if they were logical and effective. In that time we worked at different places so I didn`t have a full time training partner so I started to do Judo in club where a friend of mine was a coach because that was the only grappling sport with GI in my town. In 2001 we conected with some guys in Slovenia witch played Combat Ju Jitsu, because back then we didn`t know  the diference between BJJ and others styles of Jiu-Jitsu. For us all that was Jiu Jitsu, so in 2002 we went in a Slovenian summer camp to get us a black belt, before that we trained 8 hours per day to make it happen. untill 2006 I competed in some regional and small international tournaments in JuJitsu and won them. I always felt that I had the potential to be huge and I talked with my coach Zlatko Rizvic and former opponent in Tatami about the World Championship. He told me that if I wanted he’d make me a program for training. After one month I said let`s go and I trained whole year until the Worlds 2006. I won 3rd place because I injured myself two weeks before the tournament. 2008 in Malmo, Sweden, I won the Worlds and became World Champion, and I started too do some regional BJJ tournament. I was 32 years old and also in private business so I stopped with serious training and JuJitsu, BJJ was developing in that time so I trained for fun and to stay in shape. However I competed in regional BJJ and grappling tournaments and won a few times and also I was the first Croatian Open ADCC absolut Champion. In 2010 I got the call from Sport Acord association conected with IOC to represent sport JuJitsu in World Combat Games witch is a competition for all combat sports in the world and I became vicechampion -94 kg. In 2011 I went to Europeans BJJ in Portugal and placed 3rd in -100 Senior 1, brown belt and absolut champion, latter that year we got in touch with a Brazilian master placed in Sweden, Leonardo Neves because he has some affiliated academies in Croatia and they where sastisfied with him. We organised a seminar in our academy an also our first summer BJJ camp where we officialy got our brown belts and at the end of year, I went to Poland for qualification for WPJJC and placed 3rd after loosing to Alexander Trans. In the start of 2012, I went to Europeans BJJ in Portugal this time in Master division -100 kg and I won my category and placed 3rd in absolute witch  helped my team CheckMat place 2nd overall.

3. How would you compare Japanese Ju Jitsu to BJJ? (Like what are the similarities and differences).

If I compare combat JuJitsu and BJJ, we a talking about two different things although they have same roots in martial art JuJutsu or modern version in start called Kodokan Judo. Because now days both are combat sports so regulations and rules are developing way witch are going but techniques are the same. Takedowns and submissions are the same although in Combat JuJitsu we have kicks and punches.

Nowadays my focus is on BJJ but if somebody asks for advice witch sport to do I counter the question “what do you want from sport in return and what do you like”. After that, try both in small competitions and see what more for you. Like my coach said too me ” You must want it ” because I don`t like to talk people into something. I have the knowledge to help you in both but you must want it.

5. You have been a World champion in JJ and a European Champion in BJJ. What is your recipe for success in both sports?

My recipe for success in both sport is take one after another because it is dificult to do both at the same time at a high level. You need to be focused and drill technique, learn new things and be physicaly fit of course. You need to react automaticly and it is dificult doing both ways beacause you forget small things which make a difference. From age 30 to 34, I acomplished alot in JuJitsu and now I need to focus on my business more. If I had conditions to train and develop if I had started younger, then I would had acomplished a lot more especially in the Adult BJJ category.

6. How do you view the Croatian and regional BJJ scene?

The Croatian BJJ scene is doing great, we have lot of clubs and academies, afilliated schools from Neves/CheckMat, Aliance, Gracie, WTC,RGC. The Croatia open BJJ is the bigest tournament in this part of Europe, 6 yrs in row and we have a lot of tournaments for kids and juvenile category. Now we started the Croatian JiuJitsu league, so there are about 6 GI tournaments in a year and also a few NO GI. Croatian BJJ also has big successes in Europeans BJJ and Grappling tournament and Worlds afilliated to FILA. There is a bright future for Croatian BJJ. The regional BJJ scene is also growing but there is space for more, there a lot of good teams in the area and they have good tournaments also.

7. How would you describe your style of BJJ (your game)?

My game is on top, going for takedowns, but I’ve improved my guard game and passing game so now I`m kind of like Rodolfo, hahha.
I always go for takedowns, I’ve never pulled guard in my life, but I work a lot on positions and options from guard and my physical side especially after working with my master Leo Neves.

8. Are there other JJ players interested in BJJ, and do you think that they could be achieve a world champion level in BJJ with the right training?

I don`t now about others JJ players and their interest for BJJ competitions but I know there are a lot of purple belts among them. Like I said before, everything is possible depending on how bad you want it.

9. Please tell us about your JJ and BJJ school in Zadar, Croatia.

Now days we are doing just BJJ and grappling and we are celebrating 10 years of existence and we are realy happy about that. Our academy is located in the center of town with 250 square meters of space for training, with weight lifting and locker rooms. Also we have a lot of kids group starting from 7 yrs to 16 yrs old. Advanced and senior class. Also we help MMA clubs developing their grappling game.

My favorite BJJ players are Jacare Souza, Leo Vieira, Rodolfo Vieira, Pablo Popovitch, Terere because I like that agresive style and going for takedowns. Always pressure.

11.You’ve trained with Cro Cop, how would you rate his no gi BJJ?

I trained with Mirko in days of Pride since we new each other from university. His BJJ is much better than he shows and man he is strong like a bull! It is not his basic sport so there is no flow in BJJ technique but like I said he is better than what we see on TV.

12. What is in store for you in 2012 in terms of competitions, BJJ travels, training?

In 2012, I will drill my techniques and change sparring partners, going to other clubs. I`ll participate in the Croatian Jiu Jitsu league this year and wait for the Europeans. Also I intend to participate in camps and seminars.
And the best thing for me it would be 2nd summer BJJ camp in my gym at Zadar with Leo Vieira, Leo Neves, Chico Mendes and Michelle Nicolini so everyone is invited to participate.
More info you have at our web site www.ju-jitsu.hr
It will be huge for Croatian BJJ and the region.


13.Vedran, many thanks and we wish you all the best! OSSS!

Thank you for the oportunity to present my self and my academy aswell my Neves/Checkmat team to your readers
I wish to thank my students and my JiuJitsu partner Damir Salina and my master Leo Neves who motivated me to start competing again. I hope it was interesting to read and not boring, hehe. If you are around Zadar come and train with us, everyone is welcome. Wish you all healthy sport life and success and thanks again.