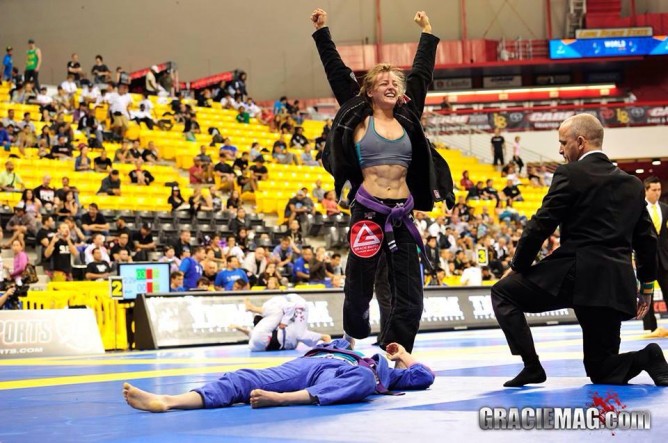 Vanessa English is a up in coming BJJ player from Nottingham, UK who took gold at this year’s World Championships at purple belt. In this interview with BJJ Eastern Europe, she talks about her training for competitions, training with Victor Estima and what’s next in 2013:

1. Hi Vanessa, can you please introduce yourself to the BJJ Community of Eastern Europe?

Hi, my name is Vanessa English, I’m a 24 year old grappler from Nottingham, England. I train at Gracie Barra Nottingham under professors Victor Estima and Gareth Neale. I’m currently ranked #1 of my division (purple light-feather), according to the IBJJF rankings, and this year have won two major titles including the European championships and the world championships.

I first started training BJJ only 3 and 1/2 years ago, I’d been training traditional jiu jitsu before this and when I moved to the midlands for university I had to move to a different gym, here they taught both traditional ju jitsu and Brazilian jiu jitsu. After a few sessions of traditional ju jitsu my instructor suggested for me to try Brazilian jiu jitsu, so I did, and remember being completely amazed by it (mainly after being tapped out a large number of times!). It started off with one and sometimes two classes a week, then three or four, and now I train 3 times a day haha! 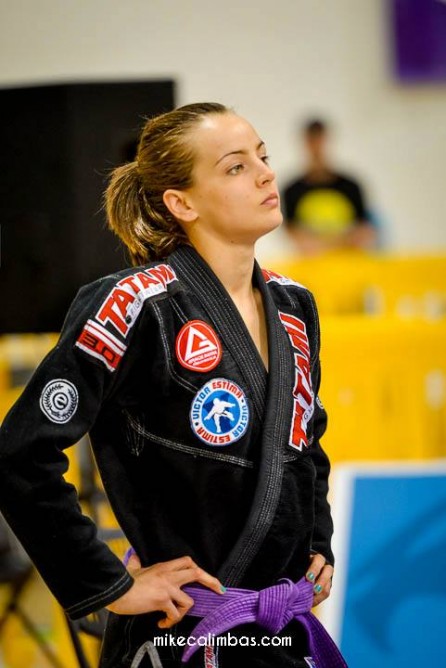 I competed a lot at white belt, and had a lot of success in the UK, and the same at blue belt I guess. After six months of being a blue belt I went to compete in the world championships, I came away with bronze. Shortly after this something pretty crazy happened, something I hope itsn’t going to be a one off thing, but then again not many people get the privilege of participating in such an event. In 2011 the ADCC was held in Nottingham, a female fighter hadn’t made weight, and I happened to be there to fill in!! I got knee barred by Luanna Alguzuir pretty quickly, but I lived to tell the tale haha!
So here I am at purple belt, ranked #1 in my division, I was the first adult in the UK to win the world championships, and I’m feeling pretty happy…to be continued!!!!…

3. You recently became world champion at purple belt at this year’s IBJJF Worlds. Please tell us about the training leading up to the tournament and how did your matches go. What did it feel like to win gold?

I already train a lot, unfortunately I’m not training full-time, but on the days I don’t work I’m training 3 times a day. I’ll do classes midday, then either conditioning or drills in the afternoon, followed by classes in the evening. Leading up to a competition I increase intensity training a little by sprinting, stair running and a bit of crossfit. I do love doing Bikram yoga too, especially just as I begin getting my head into training mode, it makes me feel detoxed and ready to go.
At the tournament I had four matches all together. My first fight I won by submission, a choke from side control, this is one of my favorite submissions. The second fight I won by a number of points, but my third match in the semi-finals was the toughest, this girl had just beaten the favorite to win. I managed to win by only one advantage. We were level pegging towards the end and I was determined not to let it go to referees decision, and I managed to secure the head in half guard within the last 20 seconds or so. Then there was the final. In the final I managed to submit, which I was really happy with, and again I used the same choke from side control. As soon as the girl tapped I was overwhelmed by a feeling of happiness, I stood up and shot my hands up in the air towards my team supporting me. I remember my coach Victor shouting to me ‘you’re a world champion Vanessa’, at this moment my head hit my hands and I sobbed with happiness for the next 20 minutes. I have never cried with happiness, at least not like that. It was the best feeling I’ve ever experienced, and I want it again!

4. Please tell us about your BJJ academy and team in the UK, and your instructor (s).

I train in a small academy in Nottingham under Victor Estima and Gareth Neale, Gracie Barra Nottingham, we have around 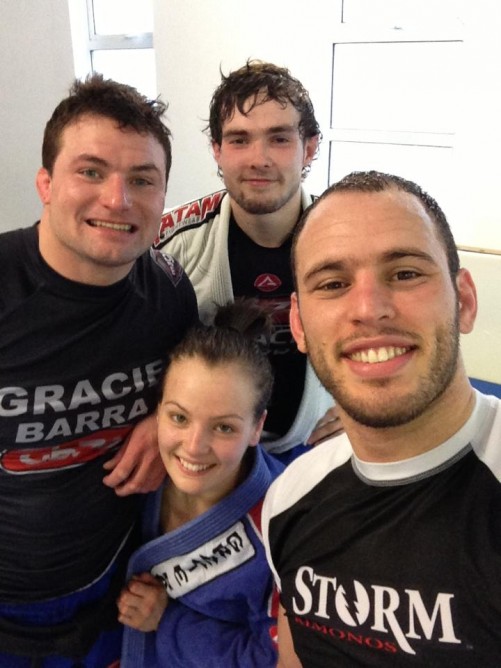 90 students I think. Our academy has such a great atmosphere, lots of friendly people and fantastic instruction, it’s a great place to spend all your time haha! Our team is growing pretty quick, and we have lots of great fighters here, male and female. In fact, in our school we have three female world medalists, which I feel is pretty special.
Victor Estima is a great competitor and also instructor. He has great success in the black belt division, including his Nogi world champion title and Gi European title, and is always a great fighter to watch. His classes are always full of energy and he always puts his all into it, he’s a passionate guy, with lots of inspiring, wise and kind words to give.
Gareth Neale is Victors first black belt, receiving his belt under a year ago, and already holds the British title within his category. Gareth competes regularly at international competitions and is a competitor to look out for. Gareth’s instruction and coaching is also fantastic. Gareth has a diverse range of martial arts knowledge to share with his students, including his training in sambo, free style wrestling, muay thai, JKD and filipino boxing.

5. How would you describe your bjj style and game?

I guess I like to be light, fast and spinny when I’m on the bottom, but on top I play a much slower game, trying to close my opponent down by using my ‘weight’ haha!

Our academy has only been running a short while, and our competition team has been slowly coming together, going from strength to strength. A number of us will be competing at the Rome Open and Nogi Europeans, we have the Nogi British championships this year too, and a few of us will be going over to Amsterdam to support Victor with his super fight against Lucas Leite on the 10th August. Exciting times ahead.

7. If you want to thank somebody or sponsors, feel free
I would like to thank my professors Victor Estima and Gareth Neale, my sponsor Tatami fight wear, and all the guys and girls who train with me and help me prepare for competition.

8. Thanks Vanessa and all the best!