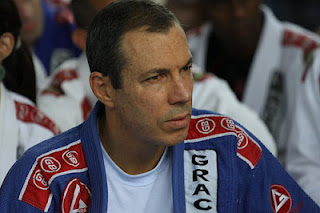 Heading the International Brazilian Jiu-Jitsu Federation for over ten years, Carlos Gracie JR analyzed the current panorama of Jiu-Jitsu and assured that soon it will get toughr for Brazilians, because of the rise of foreign BJJ players. Carlos explained why the world championships will no longer be held in Brazil, spoke about the difficulty in implementing drug tests in Jiu-Jitsu, among other things in the interview below.

What picture do you have of Jiu-Jitsu today?

Jiu-Jitsu is a sport that has grown a lot and continues to grow each year. The gentle art is spreading around the world, despite being a new sport, it is a sport that I believe will cover a the whole world. It is now spreading in the West, but in the East Jiu-Jitsu will explode too. Imagine when Jiu-Jitsu arrives China. Imagine the size. Today they have one, two teams, but in time, there will be a large number of athletes. Increasingly it will be difficult to reach the top phase of a world championship, Pan American or a national championship.

What are your expectations for the World championship 2012?

The expectation is good. Actually, I already see that in Jiu-Jitsu today, the guy that wins theWorlds is like winning the Olympics. The athletes here have nothing to envy Olympic athletes, they are tremendous athletes, hard-working kids, training, spending their lives training. I think we’re on track, even if the business is developing and is now just a matter of time. It is the maturation of a sport that is growing year by year.

Do you have plans to re-do a Worlds in Brazil?

Look, what happens is this: we are creating more major championships, but I think at the moment, the United States has more infrastructure to receive the Worlds than Brazil. Here we do not have the right club. Going to do in Rio de Janeiro? In the Tijuca Tennis Club?
In Maracanãzinho …
These places cannot cope for more than one world championship. It is even a slander to Brazil. The guys are used to a great gym. I, to do an event in Brazil, would have to be a very good thing, the event should be at the level that it would be in the United States, but you end up tarnishing the image of the event.

In Pan Ams 2012, in a purple belt, it was a non Brazilian who won at absolute and weight. do you think, soon, Americans will challenge the Brazilian black belts?

Absolutely. You have to look at history, as in the history of Jiu-Jitsu. The first guys who started learning Jiu-Jitsu outside of Brazil were people over 30 years, guys who were older. You see now that the master and the senior has a lot of foreigners winning. If you analyze and see the Pan-American champions the amount of foreigners is very large, because they get to 30 years. Now they are 40, 45. What is happening in the United States and the rest of the world is that children of players who are 35 today, 40 years, they are practitioners of Jiu-Jitsu. Brazil has an advantage because kids today are world champions that began in childhood, have an education in Jiu-Jitsu. They reached the black belt at 21, 22 years. I see my son, training from 8 years old. So you have a Jiu-Jitsu baggage when you are 23 years old that sometimes a guy who started a bit later does not. What will happen is that maybe in five years time, the kids who started at 14, 16, will be in the black belt division. I t will be tough for everyone.

Regarding your son, Kayron Gracie, who won the Pan Am 2012, how do you see his development?

I think he is getting better, becoming more of a man, starting to take things more seriously. Before he was like ”I’m not training like I should train”, but came with a desire to compete, much more than the training he did. I feel satisfied that he reached a level where he can be there among the best in his weight class. It is difficult today. To say who will win a category is very difficult. It’s like a lottery. Everyone is very tough. To counter the techniques, physical conditioning comes into play. I think that the guy who is in shape that day will do well. But I’m very pleased with him, I’m proud of him. He is a boy who so far has just given me happiness, admiration, and I hope it stays that way. He is ready for whatever comes.

Why hasn’t the IBJJF implemented steroid testing yet? How difficult is it?

I think that is due to the bureaucracy that requires more entities that test for steroids. What happens is this: steroid testing is a separate organization, which they call to the event. We, the event do not have any kind of pressure, influence over that organization. It is a worldwide organization that does this. We’re trying to do this. We are working to make it happen, because I think that’s an important thing. I personally am against these guys, who through ignorance or whatever, are taking these products that in the future will do harm to their lives. They are not realizing it that to be the champion of an event does not outweigh the harm that this will do for them later on. I, more than anyone else wish that we could stop the guy doing it.

Gracie Barra has always been a great team that dominated the Worlds. Alliance has occupied this place recently. When will Gracie Barra return to the top?

We take ten years to create a strong team. You start with the kids, they grow, they become adults, those who remain, and like competition will be part of the team that will represent your school. They will start representing your school with five, six years of black belt and then will compete in the master. It turns out that we made many changes within Gracie Barra. We had been focusing too much, the schools of Jiu-Jitsu, on competitions.
We were 100% focused on the competition only, and we were not offering a quality of Jiu-Jitsu for people who wanted to go to the gym and did not want to compete, who wanted to go to a class Jiu-Jitsu. I had to adapt what I thought was important to meet the community where you are: children, people that need a lot of Jiu-Jitsu. The competitor is usually one contestant who goes to the gym and is thick-skinned. In fact, he is a man without fear and with certain qualities in life, but has many other needs, because sometimes people do not have access to what they had access to in life. Many athletes there, who were accustomed to using the mat all day, felt a bit discouraged, wanting the academy to be focused only on them. I explained: you will have a schedule. We will have a schedule just for competition .

Will we be seeing a match between Rodolfo Vieira and Roger Gracie this year?

Rodolfo Vieira I think is a guy who has been performing very well, a young guy, who is beginning to emerge now and I think he has a great future ahead in Jiu-Jitsu. In the case of Roger, I think he is now focused on other goals. He wants to go to the UFC. His priorities have changed a bit, but I think there’s an off season for the business of MMA. Maybe he will have time to compete between two fights. I do not know if Roger will return to compete in the World Championships of Jiu-Jitsu, but a fight between him and Rodolfo can happen at any time if there is interest among the two, if any sponsor is interested in doing an event, such a thing . I think it’s cool, I think Roger would like to make it happen. Today, for him, Roger as a competitor, is a guy who likes to go for challenges, so I do not see why not … I think that anything can happen in the near future.