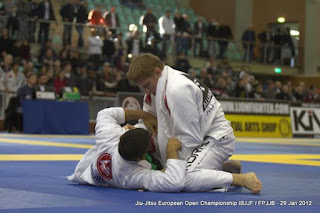 1.Hi Gustavo, can you please introduce yourself to the BJJ community of Eastern Europe

* Champion in Brazilian Nationals by teams in 2009 (Brown/Black – CBJJ)

I Started In Jiu-jitsu at 16 years old because i was getting in a lot of street fights, and I thought that “Royce Gracie techniques”, could help me! I started in Piracicaba with Alessandro Bandeira, and after I started practicing, I never got into anymore street fights… I’ve been training with Fabio Gurgel since 2007.

3.What can you tell us about the Alliance Sao Paolo and academy and about the most successful students? What do you offer students that other academies don’t?

I think the diferrence is that here we have lots of very talented guys, working hard and motived, with the same dream, guided by a very good leader.

4. You are leading a successful career running your real estate business and competing at a professional level at BJJ. How do you manage to balance your time between these two very demanding and time consuming parts of your life? How does a normal week look like for you when you are preparing for a important competition and working at the office at the same time?


I started Jiu-jitsu in Piracicaba, and grew very fond of the sport very fast. But, since I was a teenager I’ve been working with my father in our real estate business. I’ve studied business, but my father didn’t really care about my studies or about good grades, but insisted that I should also work. So I grew up training jiu jitsu, working, and studying, every day the three things… At the end of 2006, I concluded the university of business administration, all in Piracicaba. After this, i spent all day working, and training at night. I was a brown belt, and the tournaments, were getting much harder! I didn’t have good sparring partners in my city. My training was basicly with blue belts… I felt that it would be impossible to win important tournaments if I continued training there. At that time, I had saved up some money to stay 2 or 3 years in São Paulo, and decided to do this. I thought my father would not support me, but I was wrong, and he understood my dream, understood that this dream needed to be made while I was young… and he proposed me to not leave the business. I could train in Sao Paulo 4 days per week, and 2 days, I would return to Piracicaba to work. While I was in Sao Paulo, i would give a support by phone and internet. Of course that I accepted. at that time, I already loved working for our company… So, i kept with this deal until now… In normal weeks, I am training monday until thursday 2 times a day in Sao Paulo, and Work in Piracicaba friday and saturday. When I am not in the gym, I give support by computer/phone. Things like finance department are easy to do from a distance. When I stay in Piracicaba, I’m training jiu jitsu with my brother and friends in a Alliance Branch there. More or less 3 years ago, an opportunity arose, and I started with Fabio Gurgel, the program “Alliance Exchange”, for students that want come train with us… And I arranged an apartment, and take care of everything in relation to this… It is funny but looks like my destiny is to always arrange homes for people!

5. What does Fabio Gurgel represent for you?

An Idol. There are thousands of teachers in Brazil giving jiu-jitsu classes, and he is the best of all. He is a amazing athlete, fantastic master, and in same time have a very good businessman, and has the best competition team.

I will not mention my training partners to not run the risk of being unfair and forget someone …If i do this, they will hit me! kkkkk I like the jiu jitsu of ROGER Gracie…

7. You have spent some time training and teaching in Finland. How was that experience and how do you judge the level of BJJ in Finland?

I spent 15 days in Helsinki. It was very nice! Normally I don’t give classes, and giving some classes improved my jiu-jitsu! Before I came to Finland, I was expecting begginers guys… but to my surprise, many guys have a excellent technical level. The guys are very disciplined.

8. What are your favorite submissions?

Armlock from side control.

9. What are your favorite guard passes?

10. Who are the toughest or most accomplished fighters that you have faced in competition?

Before I entered Alliance, I fought with Michael Langhi and Sergio Moraes. I think I’m lucky that I don’t have to fight with them again.

The same as always. Keep fighting the Ibjjf tournaments, and always try to improve.

12.If you want to thank somebody please feel free

I wanna thank my family for the support, my girlfriend, my friends and all that believe in me.