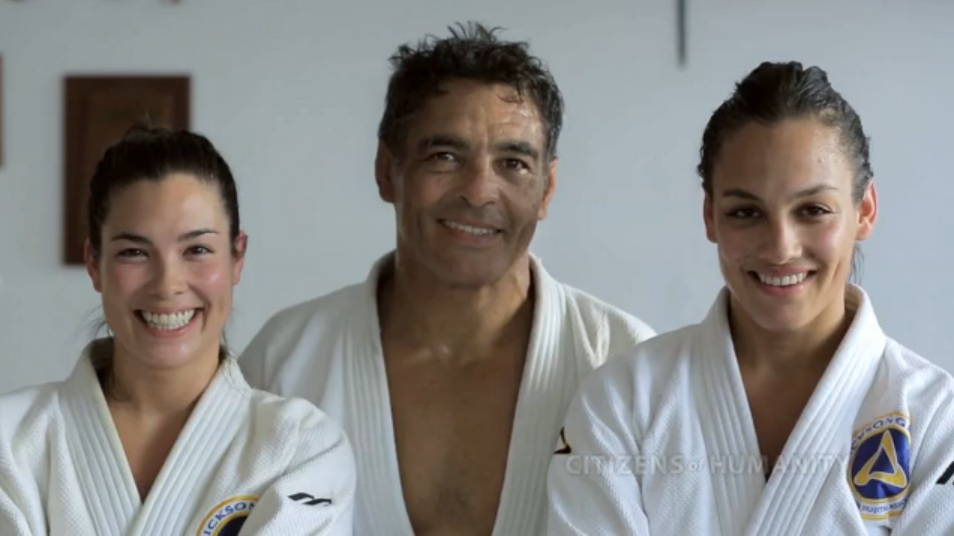 Her last name catches our attention, fills our minds with beat-up kimonos, taped-up fingers and armbars. At 27, Kauan Gracie has spent plenty of time rolling on blue Brazilian Jiu-Jitsu mats.

“As soon as you can crawl, you are put on a mat to train,” she said. When asked what BJJ has given her, her response is that it has made her more “confident and physically aware.”

The Gracie lifestyle meant that she was always learning about the human body, nutrition and exercises. But the art synonymous with her family’s name doesn’t define her. And although she embraces its roots, “For me, it was never about training for a fight, it is and has always been about self defense.

She’s a different kind of athlete. She’s a dancer. A dancer, who also happens to be the daughter of Rickson Gracie.

Kauan is a graduate of Chapman University’s BFA in Dance program. The goal of the program is to create “well-rounded and versatile independent artists,” and it is in this direction that she has taken her life. 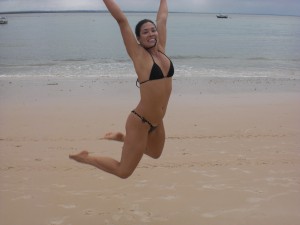 FCF: First thing our readers will want to know is about growing up as a Gracie, particularly as the daughter of Rickson Gracie. What was he like as a father and how might your childhood have differed from other kids? How is your relationship with your dad now?

KG: Ok….well, when you are growing up as anything you don’t really think of yourself as growing up as ‘that thing’…you’re just growing up. I really didn’t know I was a ‘Gracie’ until I was much older and could understand how my family has influenced the world with their presence and what that means to so many people. And it’s the same thing as having Rickson as my father….he is just my dad! My “Papi,” as I call him, is wonderful! He has always been very supportive with anything and everything I have tried to do from swimming, to singing, piano and most of all dance.

I remember when I was in college, which was my most dedicated dancing period, I would come home on the weekends and we would have exercise classes together. That meant he would spend hours teaching me all his latest exercises with his ball and elastics in the outdoor studio he built for me to be at my best and to prevent any injuries. My dad is very handy.

Nonetheless, I did sprain my ankle once very badly and the medicine used was to put my whole foot in ice cold water and keep it there for ten minutes. I almost cried after I stuck my foot in for the first time, but my dad stayed there with me every time I did it for the whole ten minutes. I was up and dancing again in two weeks.

My dad is also a big philosopher. He likes to have long moral talks, which have helped me to learn many things in my life. But as much as he talked, he has always believed that the most valuable learning is done in our own skin, so he constantly gave me plenty of chances to try and succeed, but sometimes fail and learn for myself.

I can’t say it was easy; actually it was hard and nerve-racking, but I wouldn’t change any of it. Though my childhood might have been different because I had to watch my dad fight in Japan and I had to spend months without my parents while he was training and traveling the world. When he was home he was just my Papi: present, caring and open to anything.

I couldn’t imagine having any other dad. My father and I are great friends. I remember he once asked my siblings and I: ‘What is the most important thing in a friendship?’ One said truth, the other said loyalty and I think I said trust but in the end my dad said: ‘Respect!

Sometimes you have to lie to your friend and tell him he looks great, sometimes you can’t be loyal to him because you don’t agree with what he is doing and sometimes you can’t completely trust him because, though his intentions might be good, you may want something else for yourself, but respect, that is the fundamental. If you respect someone then no matter what they say, think or do, you may not agree with them but you can respect their choices as an individual, as your friend.” I think that is why my dad and I have great respect for one another, and that is why it is so easy to love him always!

KG: I feel like I have always danced. Maybe that is because we start moving our bodies very young in our family. When you start crawling you are already rolling on the ground. I used to go on seminars with my dad and, in the middle of the seminar while he was teaching the “base,” he would call me out and balance his whole body weight on my back while I stood there smiling. I actually became sad the day my dad told me I was too old for that and that people wouldn’t be amazed anymore.

While dance and Jiu-Jitsu have always been two great companions in my life, my real passion has always been dance. In middle school I would spend the whole afternoon in classes – five, six hours a day and in high school I was the dance captain.

FCF: Did you ever feel pressure (directly or indirectly) from your family to pursue Gracie Jiu-Jitsu instead?

KG: Though I always enjoyed training, I think my parents knew that dance was what moved me. So, I never felt pressured or like JJ was a chore I had to do. It is something I can use whenever I want, like dance. I have choreographed pieces using Jiu-Jitsu movements and I’ve acquired so much bodily awareness from it that maybe I wouldn’t have otherwise. However, Jiu-Jitsu is my self-defense, my tool to use whenever I need it, it is an art I share and a tradition I admire but I am much more than just that. I love dance, I love to travel and I love all that life has offered me.

FCF: As an independent artist, what are your thoughts on women competing in BJJ and MMA – especially Kyra Gracie? What does your dad think of women competing?

KG: I think a person – man or woman – should do what makes them happy. If you want to compete in BJJ or MMA, who am I to say you can’t?

Women are doing everything men do these days and that is wonderful. I personally never felt the urge to compete because I was already competing in dance and a ballerina with a black eye won’t be too pretty. Although I don’t know Kyra’s personal and professional goal, I know she is a smart and talented woman who has represented the family very well. She is a good competitor and whatever she chooses to do, it’s her life to live.

Unfortunately, I can’t really speak for my father. I am sure he thinks more or less like me but let’s just say I was never, ever pressured to compete.