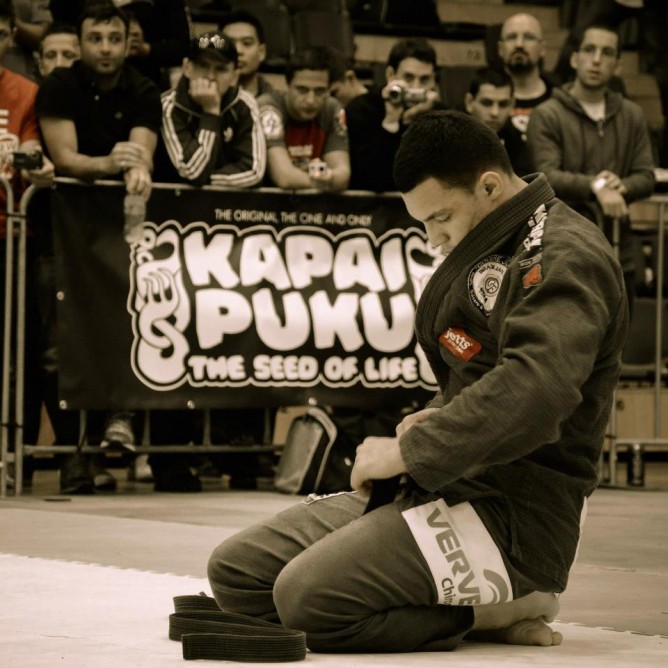 William Dias is a Brazilian BJJ black belt and Capoeira master living of Australia. He is one of the brightest BJJ stars coming out of Australia. He runs his school Brazil Combat in Perth. In this interview with BJJ eastern Europe talks about his interesting BJJ story that took him from Brazil to Australia, His love for Capoeira and his serious competition plans:

1. Hi William, can you please introduce yourself to the BJJ Community of Eastern Europe?

Hi, my name is William Ferreira Dias; I’m 22 years old, Brazilian Jiu-jitsu Black Belt currently leaving in Perth, Australia. I come from a small country city located in the heart of the state of Parana, Brazil, where I lived until 16 years of age then moving with my father to Perth Australia.  Here in Perth I run a Jiu-jitsu school alongside with my Father (Paulo Dias) and his cousin. I also teach the gentle art at another place called Champions Gym right in the city twice a week. I am currently studying Human Resources Management at a local university and will graduate in a year and half. My life has always been hectic but there is no excuses when it come s to training, I train 2 to 3 times a day every day depending on my preparation schedule, when preparing for tournaments most of my training is done at Brazilian Combat, where I normally teach and I do my weights and conditioning training at Jetts Morley. I also have a one year old son (Thiago) and a beautiful wife (Raita) who is very supportive about my training and my dreams. Some of my titles in Jiu-jitsu include; many times Australian Champion, Pan Pacific Champion, Abu Dhabi Pro Australian representative, Western Australia Champion and Parana State Champion (Brazil).

2. Please guide us through your Jiu-Jitsu and Capoeira journey.

I began my martial arts journey practicing a Brazilian martial art called Capoeira at 7 years of age, where I developed most of my balance and flexibility, one of the things I liked the most about Capoeira was the discipline taught in classes, I used to train everyday and that really helped me to stay focused in school, out of the streets and keep me out of trouble. My father; Capoeira Master and at that time blue belt in Jiu-jitsu was the responsible for introducing me to Jiu-jitsu in the year of 2000. Because of our poor financial conditions in 2001 I moved with my mother to a different city, a place which was famously known as nest of drug dealers and thugs. Conditions there was horrible, no pavement on the streets, no electricity and poor sustainability conditions, worst than that was location of this place, for me to get to training I had to catch 2 busses and spend an average of 2:30hours on the bus. That made it really difficult for me at that time, however it didn’t stop me from chasing my dreams, somehow at 12 years of age I knew one day martial arts world take me far. My family has always been very supportive about my Brazilian Jiu-jitsu career; they always believed on my potential and had always encouraged me to train hard and pursuit a better future for our family. In 2004 my father had the great opportunity to come to Australia by himself, so I started training Jiu-jitsu with his coach, Rodrigo Feijao, who I have an enormous respect and consider as a second father. From then Feijao brought up the best of me, I started competing all the time which incredibly improved my Jiu-jitsu. It was great experience training under him. In 2007 my father was able to bring me to Australia, it was hard leaving my mother but certainly I knew it was for the best. In 2010 I officially stoped training Capoeira, simply because Jiu-jitsu became too serious, I started teaching at different academies and competing at the same time. Nowadays I train Capoeira by myself during off times, when there is no competition I usually spend a few hours a week which helps me so much in my Jiu-jitsu. 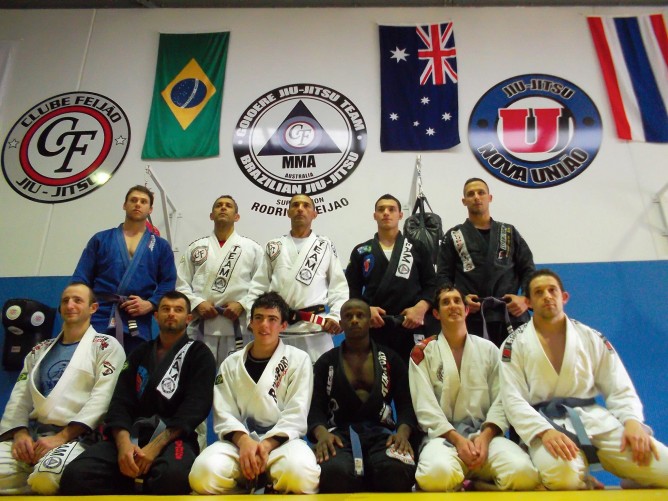 3. Please tell us about your academy, Brazil Combat and the growth of BJJ in Perth, Australia.

I come from one the greatest Jiu-jitsu academies in the world, Nova Uniao, established in 1995 in Rio de Janeiro by André Pederneiras and Wendell Alexander, Nova Uniao or “New Union” is one of the most respected teams in the world. The team is well known for its Jiu-jitsu and athletes such as: Robson Moura, Vitor ‘Shaolin’ Ribeiro, Gustavo Dantas, Rodrigo Feijao, Bruno Bastos, João Roque, Rafael Carino and many others. In Perth, our academy is supervised by Rodrigo Feijao “Club Feijao” and represented by Goioere BJJ Team. Goioere BJJ Team is currently ranked as number 1 state team in Western Australia and placed significant positions at the Australian Nationals and Pan Pacific Championship. The Brazilian Jiu-jitsu scene here in Perth has grown significantly over the past years, with the great improvement in number of practitioners, the Jiu-jitsu level has also improved so much in recent years enforcing Perth athletes to draw attention from the Jiu-jitsu community in Australia and worldwide.

I believe that Capoeira is a great sport and a great way to exercise the body and mind. Capoira helps you to develop your upper body, abdominal and lower body muscles, which are muscles that are constantly used in BJJ; with regular practice of Capoeira you can also increase your awareness, speed, agility and flexibility which is so important for any Jiu-jitsu fighter. The acrobatic movements you learn in capoeira can help you improve your balance and coordination. Practicing and playing against an opponent will improve your concentration and focus. Many famous Jiu-jitsu fighters such as Rubens Charles “Cobrinha”, Michael Langhi and many others have started with Capoeira before switching to the gentle art. That is why I believe both sports complement each other in a unique way and if you are a top level athlete, practicing Capoeira can give you the edge when training or competing. To help my students, quite frequently I use Capoeira warm ups and exercises in my classes to improve their skills and as a way to change things around, always keeping the classes interesting.

5. You have won numerous tournaments in Brazil and and you are a multiple Australian Champion. Will we see you in action at the Worlds, Pans or Wortld Pro anytime soon?

I believe that any Jiu-jitsu athletes’ dream is to win a major Jiu-jitsu tournament such as Words, PanAms, European or WorldPro.  Like many others I am no exception. I do dream in competing in the big arenas and succeeding as a Jiu-jitsu fighter. I believe that I have won what I had to win here in Australia and I now must expand, gain more international experience and competition time. I have been held back a lot with my Jiu-jitsu career in the past, university, family commitments, work and may other reasons but now I have decided to dedicate myself fully and follow my dream to one day become Jiu-jitsu world champion. For now all I can say is that you will still hear a lot about William Dias, giving big names a lot of trouble. 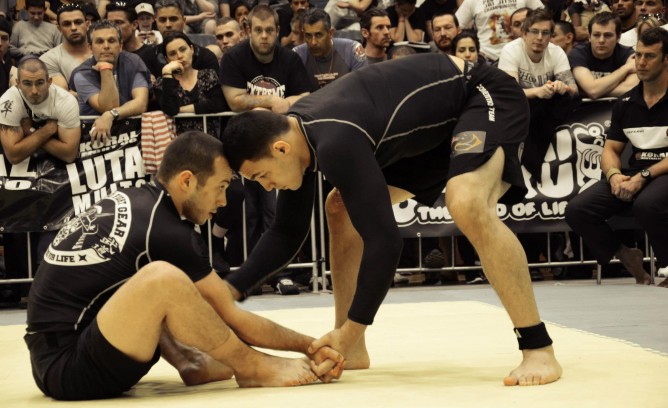 6. How would you describe your BJJ style and what are other BJJ players that inspire you?

My Jiu-jitsu style is very simple. I believe in traditional training with a large emphasis on attention to details of the techniques. I believe I have an open game with a lot of movement and explosiveness. I do implement modern techniques to my game such as 50/50, berimbolos, inverted guard but I do not agree with the use of the same techniques for stalling purpose. I have always been a guard player and tend to always look for submissions but since getting my black belt I have been instructed by my coaches to pay more attention and explore the passing side. I have taken that on board and it had strongly helped me in recent challenges. My all time favourite BJJ athlete is Ronaldo “Jacare” Sousa, because of the aggressiveness and heart. I remember when I was very young in BJJ the higher belts would mention his name and the tournaments he has won, I would think to myself one day I want to fight just like this guy. He really inspired me. To me he is still a complete fighter. I would love to see him on the mats again. That would be an honour.

From now to end of 2013 I have got a really busy schedule, competing basically every 2 weeks in major tournaments here in Australia and overseas. I’m taking my team to Japan for the Asian Open and to other local tournaments as well. I also plan to keep teaching, teaching is my second passion. I have got a new enthusiastic team at Champions Gym with great potential and bright future. Also continue the amazing work that Professor Goioere and I have been doing along the years at Brazilian Combat. So that’s what’s next for me; train, teach and live Brazilian Jiu-jitsu.

First of all I would like to thank God, who’s always been number one to me. Secondly thank BJJ Eastern Europe for the amazing opportunity of sharing my story and my family for the great support throughout my life. Thank my sponsors that are constantly keeping my dreams alive; (Jetts Morley – Verve Chiropractic – Koral Australia). A special thanks to Goioere BJJ Team, Brazilian Combat Fitness Centre and Champions Gym. Lastly a great thank you to all my students and training partners, without you I wouldn’t get anywhere. Osss

“If one day you want to be a master, you must learn first how to be a disciple”

9. Thanks William and all the best!