Adem Redzovic talks about his successful Chicago academies, his Bosnian roots and how religion helps him in Jiu-Jitsu 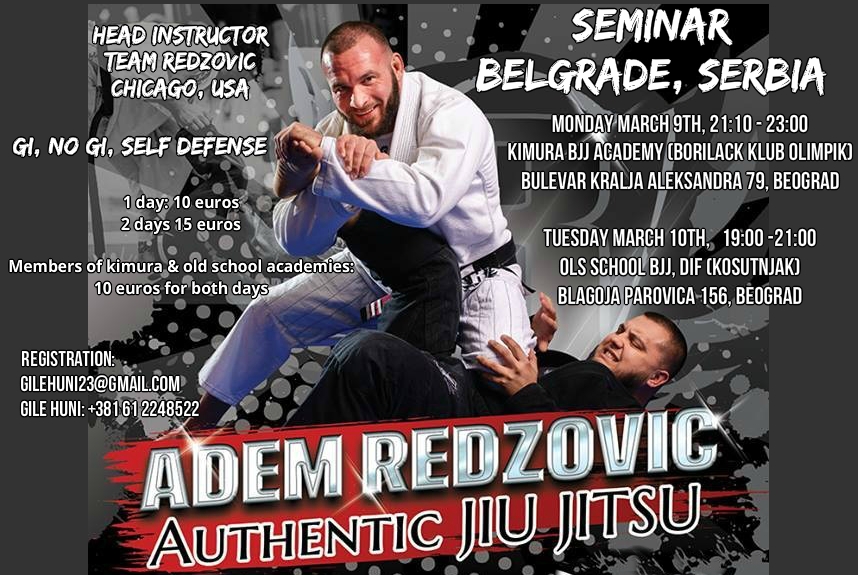 My name is Adem Redzovic, my parents were both born in the former Yugoslavia and moved to the United States about 40 years ago. I started training BJJ when I was about 17 years old here in Chicago as well as traveling across the United States and Brazil to study the art. I am a first Degree Black Belt and run Team Redzovic in the United States.

How did you and your brother first hear about jiu-jistu?

The first time we ever heard about it, like most people , was from watching the first few UFC events.

Years later one of my brothers friends took him to a health club where a few people were practicing jiu jitsu. My brother is a pretty big guy at about 6’3 230lbs. He told me a much smaller guy was able to get him tired and eventually arm-barred him using jiu jitsu. He was hooked at that moment.

He would try to get me to train with him but it took me a couple years before I eventually committed myself to training regularly.

3.Please tell us about how your brother Eddie and yourself became the first US american representatives of gracie Barra.

Not long after my brother began training, he quickly rose to the head of the class. He was very athletic and passionate and there was no one higher than a Blue belt in his training circles at that time. He felt in order to get better he would have to get out of his comfort zone and travel to Brazil to train with people who were better than him.

He ended up going to the Gracie Camp in Brazil where he met Master Carlos Gracie Jr and became his student.

We would both alternate going back and forth to train in Brazil at the Gracie Barra HeadQuarters. We would also bring some of the Black Belts from Brazil back to Chicago with us to help us in our training.

It just so happened that we were the first Americans to open an official GB school in U.S under Carlos Gracie Jr.

4.Please tell us about your academies in Chicago , and also about your best students and what were the most rewarding moments?

We now run 3 academies in Chicago. Our main academy is in the Lincoln Square neighborhood, this is the original academy that opened over 10 years ago. This neighborhood actually has a very heavy Eastern European influence and population! We recently opened a program in the LakeView area, as well as a beautiful school Downtown in the Loop. Our students can now train with all other students from each location – Its awesome.

As far as my “Best” students its hard for me to say. Its kind of like looking at my hand and trying to pick my favorite finger. They are all special to me!

5.You have Bosnian origins, please tell us about what Bosnia means to you, and also about your school in Sarajevo . Do you plan on developing BJJ more in Bosnia?

I love visiting Bosnia. My family has a home in Sarajevo so I usually stay there when I visit. I used to visit about once a year but since getting married and having kids it has been hard to travel as much as I would like.

Last summer I was supposed to teach seminars in Amsterdam and Switzerland. I was also planning to visit my friend Muhammed’s academy to train with him and his students in Sarajevo but I ended up having to have a minor knee surgery so I had to cancel my plans.

As far as developing BJJ in the region, I am really happy that Muhammed is there building his team. Muhammed was not only a student of ours but a great friend, he spent a lot of time with me and my family on and off the mats here in Chicago , so we trust that he is doing a great job, I cant wait to visit him!

6.You and your brother are devout Muslims. How does your strong faith help you in your jiu-jitsu and vice versa?

It has also challenged us to develop better manners and character.

I believe this goes hand in hand with martial arts training.I dont think you can achieve your goals without discipline.

Manners and good character in my opinion, are a form of self defense.

I believe a man with good character and manners is less likely to have an altercation as than a man with bad manners and poor character.

I dont claim to have better manners or character than the next man, I believe I am just aware of the importance and the need of its development. It’s an every day battle. A man can be a good “Muslim” (one who submits to God’s will) today, and be the biggest “Jerk” tomorrow. Its an everyday struggle, an everyday effort to try your best.

Its about self development, which is also my view on BJJ.

I want to be a better than I was yesterday, both on and off the mats.

7.How would you describe your style of BJJ (your personal style and teaching style), and do you plan on still competing alot or are you more focused on teaching? 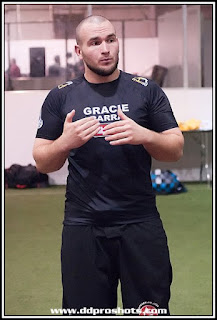 My game has changed so many times over the years. Currently, I prefer sweeps from the bottom and like to smash my way to the mount on top. I am a bigger guy so I like to try and use that to my advantage.

I took some years off from competing because of injuries, responsibilities, and lack of motivation.I recently started to feel like competing again so I just did a IBJJF tournament in Chicago and have plans to do one in NY this month. I will see how it goes. At this stage in my life I just want to take it one day at a time. I dont know what tomorrow will bring.

8.Your top 3 favorite BJJ players:
The top 3 guys who are still competing that I like to watch are probably Roger Gracie, Braulio Estima, and Kron Gracie.

Grow, get better, be better than we were in 2011, and enjoy every moment of every day! God Willing!

Adem, thanks for answering these questions, we wish you and your team all the best for this coming year.

Thank you my brother, keep up the great work in the Balkans!!

The Redzovic brothers in action