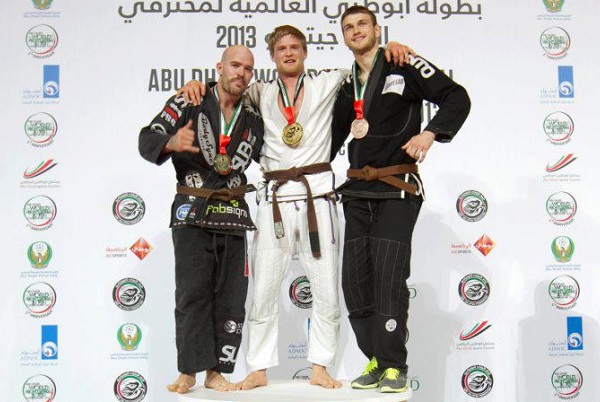 Sebastian Brosche is one of the biggest BJJ hopes for Europe. The Swedish fighter commented on his performance at the World Pro when he sat with Grapplingbloggen (I translated this interview from Swedish)

Congratulations to the gold medal at WPJJC 2013. Can you tell us a bit about the matches leading up to the gold?

Sometimes you have bad luck and other times you get lucky. I had a by in the first match and would face the winner of Luca Anacoreta and Stefan Zoll. Luca got a fever of the cold AC’s and Stefan did not weigh-in, so I came right to the semifinals! I met a Pole, Piotr, who had a good open guard, but I quickly got control and submitted him with a classic James Bond choke. The final was against Kit Dale, I had been looking forward to facing him since I saw the list! He has a style similar to mine, with and aggressive top game. He was an exceptionally nice guy, so it was a good atmosphere both before and during the match. For some unknown reason, I sat on the butt and tried a split sweep (which only only works in training). It didn’t work, so it was an uphill battle from the first 2 minutes. Since the match time was only six minutes, I had time to really get to start any real attack and he was good to get back to guard, so I won at some point. It was a truly memorable and great fight and we will see more of Kit Dale in the future!

Can you tell us about your matches in the open weight class?

First match against a berimbolo-dude from American Top Team. He was smaller than me, so it was no problem to smash and get past the guard. He flipped me and I flipped back and took a kimura from north-south. Second match was against a huge South African judo man. He was tall and stiff so it was easy to spin under him and get on his back and flip him. I made ​​sure not to get stuck in the closed guard and scrambled around to a side control, which unfortunately cost me a swollen and blue thumb. I Had a nosebleed for the rest of the match and was not as active as I wanted. I was quite proud that I managed to win with jiu-jitsu against a much stronger and bigger man. Match three against the Sheik’s nephew so I had the crowd and the referee against me. I knew that he was a hardcore staller who just tryes to win on points or advantage, so I went in to throw and be aggressive. I had some injury in my upper back, so it did not go all the way, so he won after a tough match by two points. Had I won then I would have met Paolo Miyao. Looking forward to meeting him and Keenan Cornelius in Los Angeles in about 6 weeks!

Which competitions are you planning this year?

Worlds in June. Time to give Keenan something tough to bite into!